It was just three months ago that I discussed the Culver City opening of Ooak Restaurant, which was highly significant for three reasons. First of all, it appeared to be the first opening of a Guangzhou based Chinese restaurant from Mainland China in the greater Los Angeles area.  Secondly, this opening occurred in Culver City, whose only connection to authentic Chinese food has been the branch of 101 Noodle Express located in the Westfield Culver City Fox Hills Mall.  And that presence has since been tarnished by the fact that 101 Noodle Express took their famed beef rolls off the menu at this Culver City location.  And lastly, its vegetarian/vegan menu in this part of the Los Angeles area appeared to be an outreach to a demographic not typically courted by authentically good Chinese restaurants, in this case vegetarian Westside hipsters.

However, as it turns out, Ooak Restaurant's original opening may just be the tip of the iceberg in what may be part of a game changing process.  In its first few months of operation, Ooak Restaurant has notched a slow but steady increase in clientele.  But what I have found surprising is that they seem to be drawing as much Chinese clientele for their specialty Chinese vegetarian menu as the local hipster crowd that one might have imagined to be the target audience for this location.  This might just be the manifestation of the surprisingly sudden increase in sources of authentic Chinese food on the Westside in the past two or three years as indicated by multiple openings of Northern Cafe and Tasty Noodle House branches out of the San Gabriel Valley, as well as opening of other authentic Chinese restaurants such as the fabled Din Tai Fung, Popcorn Chicken, Little Highness Bao, Little Fatty, Gu Yi, Flaming Pot and iFood, and the upcoming Westside locations of 85°C Bakery & Café, Hi Di Lao Hotpot, and Sichuan Impression.  Note too, authentic Sichuan menu items added to longstanding Westside restaurants Hop Woo and Golden China, and the appearance of a significant Chinese clientele at Bao on Beverly Blvd, and you can see that something major is happening.

But yet, perhaps the biggest event for Westside Chinese dining is yet to come.  In dropping by to check out their new (perhaps seasonal) vegetarian dim sum menu I started chatting with the restaurant manager, who disclosed plans to relocate their Chinese vegetarian operations to a smaller location, and convert the existing Ooak space in Culver City to a dim sum and Chinese seafood restaurant.  My hope is that this would lead to the first full sized Westside Chinese seafood/dim sum operation like we find in the San Gabriel Valley since Royal Star closed down in Santa Monica over a dozen years ago.  And given the Guangzhou based ownership of Ooak Kitchen, might we even hope for the first Guangzhou style dim sum and seafood restaurant in the Los Angeles area?   (The first Guangzhou dim sum restaurant in the US, H.L. Peninsula, just opened up in South San Francisco this year.)  If so, this could be a real game changer in Westside Chinese dining.

In the interim there's more news out of Ooak Restaurant as they have added a summertime vegetarian dim sum menu.  Of course, not all dim sum for vegetarians is necessarily something different from regular dim sum, such as the egg yolk lava bun and egg tarts.  However, the vegetarian versions of non-vegetarian dim sum items are quite interesting.   Unfortunately though the composition of these items remains a mystery to me as our server was not familiar with the ingredients used in the individual items except to mention things like mushrooms, water chestnuts, and vegetarian oyster sauce. 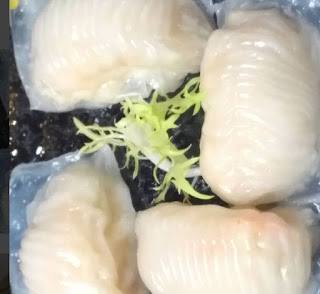 Another reasonably close cousin to the real thing was the vegetarian bbq pork bun. 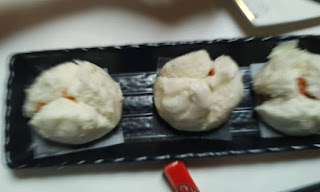 However, the vegetarian siu mai was off the mark, plus it fell apart like a house of cards as soon as I started eating it. 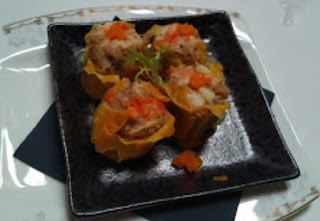 At $5 to $8 per dim sum item, Ooak Kitchen's vegetarian dim sum is worth it if you're a Westside vegetarian.

A couple of bonus items were pretty good.  The spicy vegetarian wontons weren't particularly spicy, unless you asked for the chili sauce on the side. 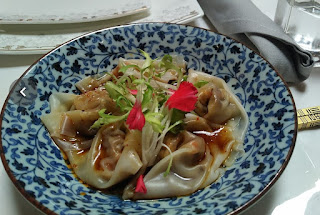 And the pineapple fried rice was visual and unique. 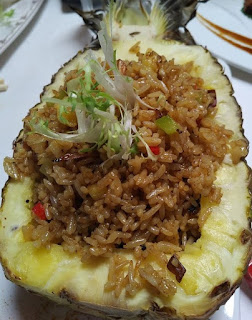 Obviously Ooak Restaurant has already made things very interesting in Culver City.  I hope that things are about to get really more interesting.