Theme restaurants seem to be popular in Asian locales such as China and Japan, but we've seen only a few examples here in California of themed Chinese restaurants, and perhaps mercifully so.  There's Indian Theme Restaurant in San Gabriel, where waitresses dress up as squaws, the departed Jurassic Restaurant in the City of Industry with its dinosaur and caveman (well actually cavewoman) theme, the former Amazon Restaurant in Alhambra with its waitresses dressed up as Amazons (notice a pattern here?) and also departed from the City of Industry, the Magic Restroom Restaurant, the less said about the better.

Less over the top is Cafe D.er with its original location in Artesia that recently moved to Alhambra at 1411 S. Garfield Ave., Unit 101.  At Cafe D.er, an otherwise typical boba, pancake and Taiwanese snack place, the theme is corgis,  but the restaurant itself looks normal except for all the corgi displays.  The main display is what I call the shrine to corgis.  It abuts a seating area that is "reserved" presumably for corgi lovers and well as corgis themselves who are apparently free to accompany their human friends into the restaurant. 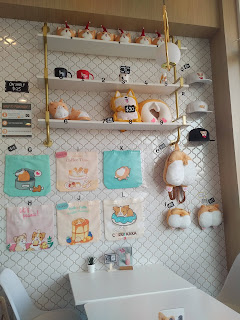 I'm not sure if all the items in the shrine are for sale or not, as some, but not all of them have price tags attached.  Adjacent to the reserved seating area is a special corgi menu, presumably for corgi owners, not corgi diners since it includes a $16 chocolate lava pancake.  $25 gets you a drink, a pancake, and a "corgi mystery box." 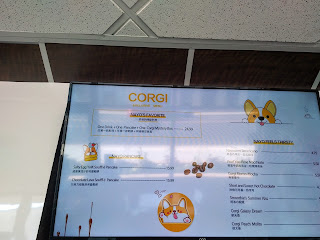 At the other end of the dining room are more corgi related products in a display case, many of which carry pricetags. 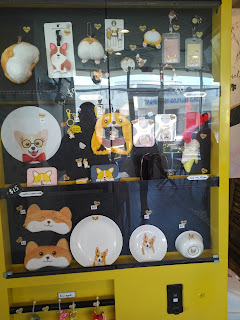 And check out these corgi figurines on the counter looking into the open kitchen. 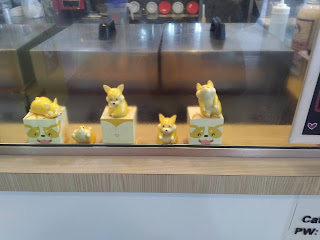 While all this might seem gimmicky and one might question how successful a corgi themed boba shop might be, the fact is that Cafe D.er has been around for 2½ years would seem to indicate it's a winning combination.

For those of you who followed my real time Instagram and Twitter posts of one or two dishes from each eating venue on our Taiwanese tour from late last year, you might be interested in my upcoming 15-part pictorial essay of all the pictures I took of our meals on the tour.  They'll be coming out in a few weeks and might be released all at once Netflix style.  Interestingly, one of the pictures I posted live was this one showing cooked squid for sale at the Ta Tung Night Market in Tainan City. 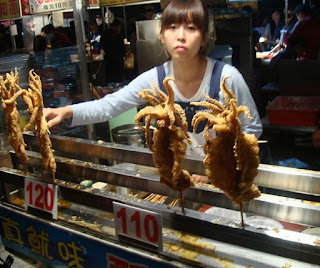 So how did this picture become part of an amalgam of pictures taken at the Tung Ying Tattoo parlor in Tainan City? 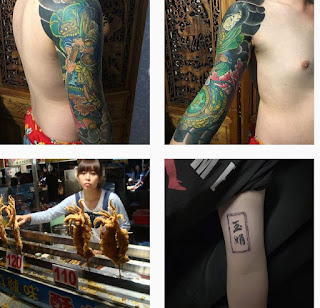 Well, it's all about geotags, the little bars that appear when you "Add Location" to the Instagram photograph you're about to post.  Generally when you "add a location", the closest registered location to where you are at the time you post the Instagram picture appears first.  But you can't just blindly choose the first listed box.  Perhaps your location has not yet been geotagged, there are multiple overlapping locations, or sometimes the geotag information goes haywire.  Once while in Spain, I was getting geotag choices for Oporto, Portugal.  Another time here in Los Angeles I was getting geotags from Reno.

And of course, if the geotag locations are under a different writing system, e.g., Chinese, you have no idea if the first choice is correct.  So knowing of the issue involved, I still figured it was still better to choose the first location listed and hopefully get many correct locations, instead of using no geotag or a more general one (e.g., name of the city).   Even if it meant mistakenly saying that I was at the fried squid counter at the Tung Ying Tattoo Parlor.
Posted by Chandavkl at 1:22 PM 16 comments: