Many of you have read my articles discussing how the massive number of Mainland Chinese students coming to study at US colleges in the past decade has changed the face of Chinese dining in the United States.   Cities big and small proximate to colleges and universities with a sufficient Chinese student enrollment have been introduced to authentic Chinese food, as restaurants have popped up to meet this demand for Chinese food.

Interestingly, Chinese restaurants serving these Mainland Chinese students in smaller US towns such as Harrisonburg, VA, Storrs, CT and Iowa City, IA have developed their own style which you typically do not see in non-campus town Chinese restaurants.    There are two separate distinguishing characteristics that mark these restaurants.  Because the Mainland students come from different areas of China, these restaurants often serve multi-regional Chinese food, as opposed to focusing on, say, Sichuan or Shaanxi style food.  Secondly, none of these restaurants can (or wants to) survive on Mainland student business alone, so they also have classic Americanized Chinese dishes on their menu for the locals and non-Chinese students.  As I previously wrote, this can lead to a menu which gives a panoramic view of the entirety of the history of Chinese American dining.

While not as pronounced as some of the examples in eastern college towns, the newly opened iFood Chinese in the shopping center on the southeast corner of National Blvd. and Sepulveda Blvd. in West Los Angeles is the best example I've seen locally.  For fans of classic Chinese American favorites, there is orange chicken, wor wonton soup, broccoli beef and honey walnut shrimp.  For the health minded Westside locals watching their cholesterol count, there are chicken potstickers and chicken xioalongbao (try to find either of those in the San Gabriel Valley).  For Sichuanese natives there are nine varieties of dry pots.  Taiwanese can revel in fried pork chops and Taiwanese style salt and pepper shrimp, and for the Shanghai crowd there's giant ground pork meatballs.   And for us Cantonese there's West Lake Beef soup and cold chicken with green onion.  What a lineup!

Stumbling Across Chinese Food In Dubai and India

As previously noted, being able to sample any kind of Chinese food while part of a tour group is an iffy proposition as you are largely restricted to eating at the stops provided by the tour organizer.  In this regard, because our trip to Dubai and India was organized by the Chinese operated Ritz Tours, out of the San Gabriel Valley, I was hoping there would be some Chinese food choices, given tour packagers in China and in Chinese-American communities often provided mostly Chinese meals even in tours to non-Asian destinations.  However, while I could imagine Chinese meals in tour destinations such as Europe, I doubted that Chinese meals would be provided for Dubai and India, and my inquiry to the tour company confirmed that there were no Chinese meals scheduled.

We actually arrived in Dubai two days before our main tour so we could stop by the adjacent Emirate of Abu Dhabi on a local tour.  At lunch time we were taken to buffet lunch at Al Asalah Heritage Restaurant.  They had a nice selection of dishes there, including something like beefy mashed potatoes, chicken, fish, beef, beans, Indian dishes, and interestingly, chow mein and basmati fried rice.  I thought the presence of chow mein was an interesting demonstration of the universality of that dish.  After we returned to Dubai in the evening,  I decided to read about the Abu Dhabi buffet restaurant  on the internet, and to my surprise it was classified as a Chinese-Lebanese-Indian restaurant!  That explains the chow mein at the buffet table and perhaps shows the universality not of chow mein, but of Chinese operated buffets in non-Chinese guise.

The next day was a free day for us in Dubai so we headed to the Mall of the Emirates, one of the two great shopping malls in Dubai.   This visit was very illuminating as to the state of Chinese food in this part of the world.  At Chow King  I had the chicken siu mai, a rarely encountered dish in the United States, where siu mai is almost exclusively made with pork.  Also it was interesting that "Chinese fried chicken" had a different meaning in this part of the world, too. 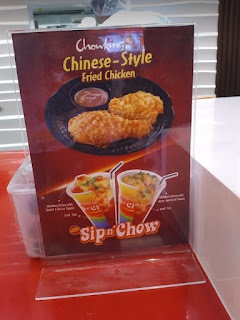 But the status of Chinese food really gained perspective when I passed the Dubai branch of Din Tai Fung and took a look at their menu.   All of your favorite porky items, like xiao long bao, wonton, dumplings, shu mai, and potstickers were all made with chicken instead.  With chicken, and a lesser extent turkey, used to substitute for pork in both Chinese and non-Chinese foods, I could do very well eating in a Muslim society.  (As a sidelight, not only was Din Tai Fung represented in Dubai, but Hakkasan also has a branch, though in a fancy hotel, so topflight authentic Chinese food is well represented in Dubai.)

The first true clue that there would not be a Chinese food drought on the tour came on the first day of our official tour.  At the fabulous Atlantis The Palm resort, the Kalidescope $50 lunch buffet contained a whole selection of Chinese food.   Again, most fascinating to me was all of the chicken based items that we normally don't see in the United States.  Topping the list was the bbq chicken bao--a bao identical to the steamed bbq pork buns we get back home, but with chicken substituted for pork.  Other items included regular chicken buns, chicken xiaolongbao, and chicken siu mai.

After our relatively short stay in Dubai it was on to India and our first stop of Delhi.  When we went downstairs for our first buffet breakfast at the J. W. Marriott, it was clear that this hotel did a fair amount of trade with Chinese guests, as there was an entire section of Chinese food including cook to order noodle soup (including fish balls and chicken balls), gai bao, chicken siu mai, garlic chili chow mein, and other dishes.    Dinner at the hotel restaurant had even more Chinese items than at breakfast, including  roast duck, pork and chicken, sweet and sour water buffalo (below), and oyster sauce lamb. 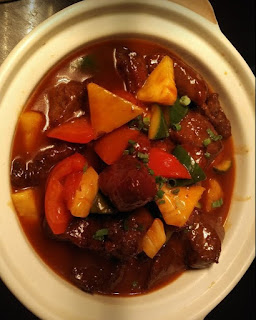 The hotel meals in Agra and Jaipur did include a few Chinese selections (including candied wintermelon in Agra), but nothing like the ones noted above.  The Marriott in Jaipur had a token nod to Chinese guests, Chinese noodle soup at breakfast and dinner, and strangely, something called moo goo gai at dinner.  However Moo goo gai was nothing like the similarly named ancient Chinese-American dish of sliced chicken in a white sauce, but rather as you can see below, was chunks of chicken in a savory sauce. 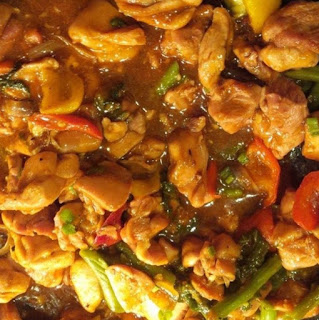 We did have one last shot a Chinese meal when we returned to Delhi for the flight home, as the tour guide took us to Lazeez Affaire, a combination Indian and Chinese restaurant.  However, the menu they gave us had no Chinese items on it so we just ordered Indian food.  However later looking at the Chinese menu it’s just as well as we didn’t order from that menu, which included such dishes as chop suey, pad Thai, sushi and tom yum soup, and which also entailed an excessive length of time to cook.
Posted by Chandavkl at 3:26 PM 2 comments: