For the past 15 years or so, there has been an explosion of Chinese dumplings in the United States. Originally it was mostly pork dumplings, and pork mixed with other ingredients, either seafood or vegetables.  More recently fish dumplings, vegetarian dumplings and lamb dumplings have joined the crowd, and occasionally beef dumplings, too.  There were also scallop dumplings and sea cucumber dumplings at the pioneering Dumpling 10053 in El Monte, and the infamous Hai Ching dumplings at Beijing Duck House in San Gabriel.  Why were they infamous?  Well, when I saw them on the menu I asked what they were.  Unfortunately nobody in the restaurant spoke much English and they grunted something like "veggin", which I interpreted to mean vegetarian.  Not being a fan of vegetarian dumplings I passed in favor of fish dumplings and scallop dumplings.  That turned out to be a smart decision, as shortly thereafter I read a review of that restaurant which commented on their Hai Chang, or "sea worm" dumplings.  Sure dodged that bullet.

But the one thing missing from the list was chicken dumplings.  For some reason you just don't see Chinese chicken dumplings.  Well, that's not entirely true--for many years you have been able to get chicken dumplings at Americanized Chinese restaurants on the Westside of Los Angeles or the San Fernando Valley, though oftentimes it's not jiaozi, but rather Japanese gyoza which is a different animal in my book.  It wasn't surprising to see chicken dumplings in these locales, since residents are more into healthful eating than Chinese diners in the SGV, and where traditional pork dumplings are a turn off.  Of course generally speaking these chicken dumplings weren't very good, as anyone who has had Americanized Chinese food in West LA or the SFV would suspect. At least for a period of time, I was able to get my fix of really good Chinese chicken dumplings at a restaurant called George's House in Inglewood (which for non-Angelinos, borders on South Los Angeles), but then they shut down.  (How they lasted as long as they did is a mystery to me since I never saw another customer there, though there were 4 Yelp reviews covering a span of 3 years.)  And finally there were the fantastic Chinese white meat chicken dumplings at Golden Wok in San Antonio, a restaurant with a mostly Hispanic kitchen staff, but a Chinese chef for the separate authentic Chinese menu,  but I only go to San Antonio once every 30 years or so.

But in the San Gabriel Valley or other communities hosting authentic Chinese food, chicken dumplings were non existent.  They were on the menu at branches of 101 Noodle Express, but every time I tried to order them I was told they weren't available.  I thought my prayers had been answered about five years ago with the opening of Good One Restaurant in Alhambra, which made the first great chicken dumpling I had found in the San Gabriel Valley.  And they even sold them frozen in bulk.  But when I went back maybe a month after their opening to pick up some of the raw frozen dumplings, the restaurant was already gone.  Curses!

Since then there have only been a couple of local legitimate chicken dumpling sightings.  Fortune Dumpling in Monterey Park, the successor to Dumpling 10053 came up with a chicken wolfberry dumpling, which was OK, but didn't taste like a chicken dumpling.  Min's Dumpling House in Chino, out in the Inland Empire, has them, but who has time to drive out to Chino to get more?  (They just opened another branch--in Corona, even further away.)  And a few Bay Area restaurants have chicken with corn dumplings, such as House of Dumplings in Newark, but none are very good.

Failing to find restaurant grade Chinese chicken dumplings, I expanded my search to Chinese market freezer cases for chicken dumplings, but most of those sold are either gyoza type or mixed with mushrooms, which are my enemy.  For a while I was buying chicken dumplings from Costco, even though they were much too sweet.  To show my complete desperation, my most recent solution has been to rely on Russian pelmeni, their version of chicken dumplings, which I buy from the freezer at local Armenian markets.

But this is my lucky day.   I was at the Hong Kong Supermarket in Monterey Park, and walking by the freezer case I saw Wei Chuan chicken and vegetable dumplings, on sale, even.  While I had seen plenty of Wei Chuan dumplings before, this was a new product.  And as it turns out, exactly what I've been looking for these past 15 years, a yummy jiaozi suitable for frying.  Now, if I could just find a local version of those San Antonio chicken white meat dumplings, I'd be completely happy.
Posted by Chandavkl at 1:12 PM No comments: 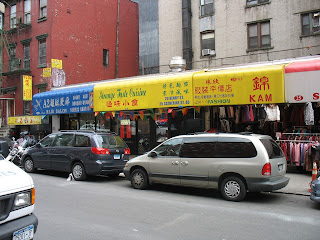 One of the most unusual Chinese restaurant names I have encountered was Strange Taste Cuisine at 20 Henry Street in New York Chinatown which operated around 2007 and 2008.  I mentioned it in my interview in the theatrically released Chinese food documentary The Search For General Tso, as well as in my Menuism article on best odd Chinese restaurant names.  However in neither case was the restaurant actually shown.  In the General Tso movie they had to settle for a shot of whatever was at 20 Henry Street when they filmed the movie, while Menuism showed a third party menu that happened to have a dish called strange taste chicken on it.  I was slightly bothered by this, as a true skeptic might not believe that Strange Taste Cuisine ever existed.

Fortunately, I just inadvertently came across some of my random photographs, and being smarter than I realized,  I had taken taken a picture of Strange Taste Cuisine to preserve it for posterity.   I probably should have also photographed the delicious rice cakes I ate there, but I'll settle for the photographic evidence that I do have.