The Election Is Over

Yes, I know the calendar says it's September and there are still seven weeks to go until election day. But the election is over and the Republicans will be taking a pounding. A year ago, Intrade futures pegged President Obama's chances of re-election at no more than 50 percent, and the prospects for a Republican takeover of the U.S. Senate were riding at 80 percent. The first to turn was the presidential race, when this past spring some good economic numbers shot Obama's odds up to 60 percent. They receded two or three points this summer as the economy seemed to stall. However as it became clear that even though national polls showed a neck and neck race, the electoral numbers didn't add up for Mitt Romney, Obama's odds surged past 60 percent. Add to this Romney's remarks about the 47 percent of Americans who pay no federal income tax, and Obama's odds are now 70 percent.

Now unseating an incumbent president is always a difficult proposition so an upcoming Obama re-election would be far from shocking under any circumstances. However what is shocking is the evaporation of the prospect that the Republicans will control the Senate. Even last month the odds favored a Republican senate, but almost overnight the odds on Republican Senatorial control have plummeted to 20 percent. I'm not sure what triggered such a rapid reversal of fortune. Certainly, the pigheadedness of Rep. Akin in turning a certain victory in Missouri into a certain loss didn't help. More likely, Romney's comments about the 47 percent, while probably not that significant since he wasn't going to win the election anyway, possibly sets up an Obama landslide that will submerge a number of Republican Senatorial candidates in its wake.

Of course futures tradings in political events is highly volatile and it is possible that things may turn again. Indeed during election day of 2004, the odds on a Kerry victory shot up to over 60 percent, thanks to the release of exit polling numbers that eventually turned out to be inaccurate. But unless President Obama is photographed kicking kittens or punching first graders, such a reversal of fortune appears to be unlikely.
Posted by Chandavkl at 12:13 PM 1 comment:

Sometime probably in the early 1980s I first heard of Springfield cashew chicken. This was one of a handful of regional Chinese American specialties that had developed over the years, including the St. Paul sandwich in St. Louis, MO; the chow mein sandwich of Fall River, MA and Woonsocket, RI; chicken fingers in Boston and adjoining areas of New England; and honey chicken in South Florida and other parts of the south. Over the years I had tried to think of ways to incorporate Springfield, MO into my travel itinerary, but had never been able to do so, and been resigned to the reality that I'd never make it to Springfield.

So when Clarissa Wei first interviewed me for her L. A.Weekly Squid Ink article, and she asked me what Chinese restaurant I hadn't been to that I would most like to go to, it didn't take deep thought on my part to reply it would be someplace in Springfield, Missouri to try their cashew chicken which was deep fried and served with gravy, rather than the typical pan fried version. Little did I realize that weeks later I would be in Springfield sampling five varieties of that dish, as the guest of Susan Wade and the Springfield Convention and Visitors Bureau. To my surprise, I learned that there were direct flights between Los Angeles and Springfield, albeit only three days a week, on Allegiant Airlines. Also when I discovered that the airport in Springfield was called Springfield-Branson airport, that helped explain the existence of that direct route.

And this is not the only contradiction about Springfield. We were fortunate that among the 100 Chinese restaurants in town, we were taken immediately on arrival at Springfield Airport to Creasian Restaurant, which based on the name, I wasn't even sure served Chinese food. Consequently, when we went inside and the owner asked whether we would like to order off of the Chinese menu, as opposed to the regular menu, I was absolutely floored. Who would expect a Chinese menu in a town whose only Chinese population appeared to be a small number of Chinese restaurant workers? But there on the Chinese menu were Guilin rice noodles, cumin beef, marinated beef Chiu Chow style, braised whole fish, and a couple dozen other traditional dishes. The reason for the separate menu was that the restaurant was close to the Missouri State University campus, which unbeknownst to me has a sizable enrollment of overseas Chinese students. This just reinforced a corollary rule which I had discovered over the years that cities without a significant resident Chinese population can still support authentic Chinese restaurants if there is a large college campus with Chinese students nearby.

While we did have a taste of Springfield cashew chicken at Creasian, the marquee event (literally, since they put my name on the marquee outside the restaurant) was lunch at Leong's Asian Diner, owned by Wing Leong, the son of David Leong, who invented Springfield cashew chicken almost 50 years ago back in 1963. It may have seemed disconcerting to have to eat lunch with cameras from the local NBC television outlet rolling, and still cameras flashing away. But hey, we're from Hollywood, and Brad Pitt (who happens to come from Springfield) lives in our neighborhood near the Hollywood sign, so we're used to the attention. Besides the delicious cashew chicken, we also were treated to a tasty and inventive dish of lop cheung lo mein, Japanese udon soup with fish cake and pork belly, and siu mai with an interesting twist of a small shrimp on top.

Yet, the highlight of the trip for me turned out not to be the cashew chicken. It was meeting with 92 year old David Leong, the Godfather of Springfield cashew chicken whose proteges prepare the dish throughout the city of Springfield. Though he spoke a slightly different dialect than ours (and I only include myself in "ours" because I do speak a little bit of pidgin Toishanese), Mrs. Chandavkl and I shared a number of wonderful conversations with him during our four meals together. Mr. Leong came to the United States in 1940 as a 19 year old, survived as part of the fourth wave that landed on Normandy beach, and learned the restaurant business in New Orleans, Philadelphia and Pensacola before setting up shop in Springfield. He ignored the advice of his Chinese friends in San Francisco who said it was silly to try to operate his business in Springfield. He overcame the adversity of applying for a loan to open his first restaurant in Springfield and being met with racial epithets by the bank officer who turned him down. He was resourceful in getting his Caucasian businessman friend to co-sign on the loan that enabled him to set up shop. And it was his genius to create a Chinese dish that reflected local tastes and has become the signature dish for the entire city.

As to the cashew chicken itself, it definitely is unlike anything I've ever eaten in a Chinese restaurant in Los Angeles, New York, San Francisco, or anywhere else. You might think of it as a deep fried chicken nugget in a brown oyster sauce influenced gravy topped with cashew slices. Or perhaps like orange chicken but with a salty, not sweet sauce. But really, we had the dish at five different restaurants, including Canton Inn, Chinese Chef and Mr. Yen's, and each was different in its own way, and it's not surprising that the dish has become so popular throughout the Springfield area. 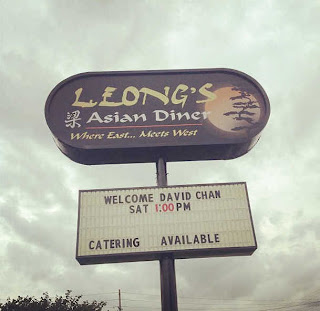