One television appearance I have little record of was a TV show done in the fall of 2013 called Asian Communities. I did TiVo the recording when it appeared on the air in early 2014, but that machine later crashed and the recording was unrecoverable.   In any event that was no great loss as my appearance was hardly worth it except for the fact that it provided interesting insight on how TV shows are made.  This was a segment of an irregular series that KCET used to air called Global Communities, a spotlight on LA ethnic communities.  Clarissa Wei and I did the taping at Lunasia Restaurant in Alhambra, where we sat for four hours.  I'm not sure if our total air time was 5 minutes.   So why did it take four hours to get a brief amount of air time?  First they ran late at their previous venue.  Then there was a union mandated one hour lunch break, which the technicians couldn't waive even if they wanted to (which they did because they were running late).  Then we'd reshoot scenes over and over, which was very confusing because it made it difficult for me to back reference anything I previously said since it was hard to remember how the previous segment ended up.  One really odd thing was that even though this show was seen only on KCET in Los Angeles, the hostess. Angela May, was flown in from New York.  And while I met with the show directors during the week to go over what they would be talking about, I didn't meet the hostess until I got to the restaurant.  It was only then that she was briefed on what the interview would cover.  So the gal was in reality like an actress reading her lines. Meanwhile, the segment producer who did the pre-interview legwork, a gal named Alice Robertson, turns out to be a "model, actress and archaeologist" who hosted a TV show on the History Channel.  And the old guy who was the production assistant had one acting appearance in addition to dozens of TV production credits. And the final show itself was disappointing because half the show was inserts of Globetrekker segments shot in Asia, having nothing to do with LA.  The only good things are (1) it's a credential to say I was on KCET, and (2) they asked me to bring a print out of my restaurant list and the hostess flipped through it at the start of the interview. 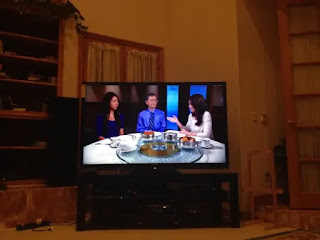 One other point is that even the most sparsely watched TV shows do have an audience, and in fact a while later one family friend mentioned that she had seen my appearance.  That reminded me of my first TV appearance back around 1978 on a public service show (at a time when the FCC mandated a minimum hours requirement for TV stations to broadcast such shows) on KNXT, Channel 2 in Los Angeles.  On that show called "It Takes All Kinds," for the episode on ethnic groups in Los Angeles, I was interviewed by Truman Jacques and Patricia Stich as a representative of the Chinese Historical Society of Southern California.  Since this show was required programming, I'm sure the ratings were negligible.  The show aired early on a Saturday afternoon, and when I got back into the office on Monday morning, one of the guys said he saw my appearance.  It seems that he was having his TV repaired at the time and the repairman was flipping channels and there I was!
Posted by Chandavkl at 9:06 AM 1 comment: