A few years ago I was interviewed by the Italian food magazine, Fine Dining Lovers, about my thousands of Chinese restaurant visits.   It is actually a very strange article in that while the writer interviewed me in English, she wrote the article in Italian.  Then the finished article was translated back into English, leading to some very strange wording.  (You might say something was lost in the double translation.)  However, what upset me when I first saw the finished article was that they got my name wrong, calling me David Chang, the name of the renown New York chef and restauranteur. I immediately pointed this out to them, and they dutifully made the change on their website, making me happy.

However, what I didn't realize is that at the same time they changed "David Chang" to "David Chan" in the article about me, they also had an existing page compiling all the articles they had written about David Chang, the celebrity chef, and they added my interview to that page.  So they also dutifully changed the heading on that page from "David Chang" to "David Chan."  This mixup isn't terribly important since it only matters if you're looking for stories about David Chang on the Fine Dining Lovers website.  But it is funny that all their articles about the famous David Chang are catalogued under the name of the little known David Chan, which is the opposite of how things like that usually occur.

A good example of the latter type of confusion comes from my non-existent listing in the Internet Movie Data Base.  Yes, the IMDB did pick up my appearance in the movie documentary, The Search For General Tso.  However, they added it to a listing for another David Chan, who gained some level of notoriety for being in the cast of the original Teenage Mutant Ninja Turtles movie.   Contrast this to the other internet movie websites like The Numbers and the now defunct New York Times movie database, which gave me a separate listing for being in the General Tso Movie.  And I presume the real David Chan actor is wondering what the heck General Tso is.

Fortunately other websites containing my compilations don't confuse me with anyone else.

(And thanks to PorkyBelly on the Food Talk Central message board for the ironic back reference.)
Posted by Chandavkl at 9:21 AM 1 comment:

My LA Weekly review of Embassy Kitchen did not contain the pictures of the dishes I highlighted.  To fill that void, here's the original version of that article, fully illustrated.

Crowning a restaurant as the “best” Chinese or any other category of restaurant is a tricky thing, given the subjectivity of such a determination and the varying tastes among diners.  While this is certainly the case in trying to anoint a best Chinese restaurant in Los Angeles, most discussions of the topic tends to involve the same group of contenders, like Sea Harbour in Rosemead, Chengdu Taste, Lunasia, King Hua and Szechuan Impression in Alhambra, Newport Seafood and Mian in San Gabriel, and Din Tai Fung in various mall locations.  (Or if you’re Yelp, then it’s Americanized restaurants like Sea Dragon, Yang Chow and Wah’s Golden Hen. [Link to my L.A. Weekly Yelp article.])  However, the best of the bunch may well be Embassy Kitchen in San Gabriel, located directly in front of Embassy Billiards pool hall on San Gabriel Blvd., and from whence it derives its name.

Besides the improbability of Embassy Kitchen being one of the best Chinese restaurants in Los Angeles despite its status as the Chinese equivalent of bowling alley dining, equally surprising is the fact that Embassy Kitchen is still under-the-radar despite having been around for 20 years, making it senior to all the other top non-Yelp contenders except Newport Seafood, which opened in San Gabriel a year earlier in 1996.  Embassy Kitchen started as a small adjunct restaurant to the billiard parlor around 1997, even using the Embassy Billiards moniker.  It then moved to the large restaurant space in front of the billiard parlor around 1999.

Like other top Chinese restaurant contenders Sea Harbour, Lunasia and King Hua, as well as most all of the other banquet sized Chinese restaurants in the San Gabriel Valley, Embassy Kitchen serves Hong Kong style cuisine.  But aside from that, Embassy Kitchen diverges from these other Hong Kong style restaurants in many ways.  There are no tanks in the dining room full of live seafood, nor is the dining room huge, loud or boisterous.  There is not a gaudy menu with so many choices that the menu could be made into a movie, and they gladly take reservations.

But what distinguishes Embassy Kitchen from the pack is the food selection.  Yes, you will find Cantonese favorites like rock cod in corn sauce, walnut shrimp, fish maw crab meat soup, e-fu noodles, and steamed chicken with ginger and scallions, all superbly prepared.  But what you also find at Embassy Kitchen are two extremes not typically seen at most Hong Kong style restaurants in Los Angeles—complex dishes that require day in advance ordering and wonderful homestyle dishes.  To some extent most of these dishes are obscured on the Embassy Kitchen menu as they are only found on paper inserts on the inside cover of the permanent menu.  On the other hand, that might not make much of a difference, since non-Chinese faces are indeed rare at this restaurant.  There is no nefarious intent in keeping these dishes in a Chinese language supplement, as the owners indicate that they just weren’t sure how to accurately describe these dishes in English.

Perhaps the best exemplar of the complex advance order dishes is the boneless chicken stuffed with shrimp paste.  The chicken skin is light and crispy, the chicken is tender, and the shrimp paste provides a savory contrast. 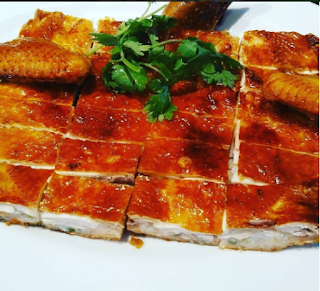 Then there’s the tilapia rolls with whole carcass, one of the most unique and visual dishes you will find at a Los Angeles area Chinese restaurant, though from a taste point of view the re-stuffed fish (where the bones are removed and the fish is filled back up with fish and ground pork) might be a better choice. 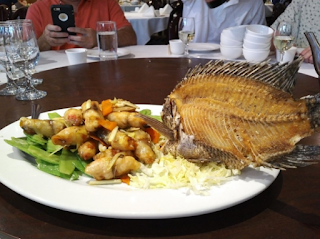 One of the special items that does not necessarily need an advance order is the eight treasures stuffed duck. 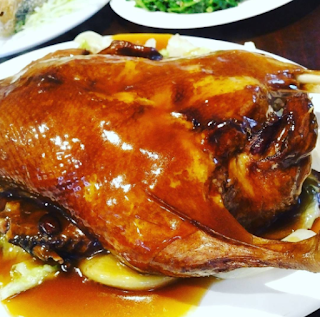 Other signature dishes include the chicken stuffed with sticky rice (a traditional Cantonese dish still popular in the San Francisco area, but difficult to find in Los Angeles), and the fried rice with whole Dungeness crab or lobster.  Note that all of these dishes are large and run in the $50 range, and hence are more suited to large parties.  Indeed Embassy Kitchen has a larger quotient of large size tables compared to most other Chinese restaurants in Los Angeles.

At the other end of the spectrum are the many uncommon homestyle dishes on Embassy Kitchen’s menu.  However, be aware that these dishes are not inexpensive, as there are few items on the Embassy Kitchen menu that are under $15 and many are $20 or more.  But these dishes are generally well worth the price, particularly when considering the subtleties and complexities in the flavor of the dishes here.  At most popular Chinese restaurants, experienced diners can discern visually and by taste the main ingredients of a dish.  Yes, this dish contains dried orange peel, or five spice, or bean paste or fish sauce.  But at Embassy Kitchen this is not necessarily the case.  For example, our party was stumped by the steamed egg with tofu and seafood topping, so we had to ask them what was in it.  They replied “shrimp roe.”  Such ingredients also explain the higher price point. 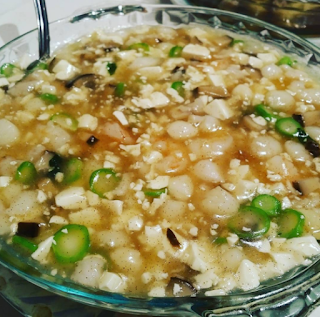 Many other down-to-earth, and seldom seen at restaurant dishes are also real winners.   Steamed eggplant with dried scallop and ground pork may sound fairly pedestrian, but it is one of the best dishes on the menu, with it seemingly being a mystery how the ground pork can be cooked in such a light and fluffy manner. 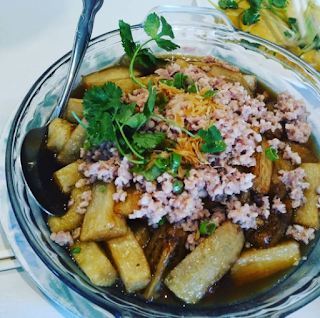 Similarly outstanding but unlikely dishes include clear rice noodles with cabbage, egg and dried scallops; stir-fried beef with flour crisp; French style beef stew (which comes with noodles at lunch time but not at dinner); and imitation shark’s fin with egg whites. 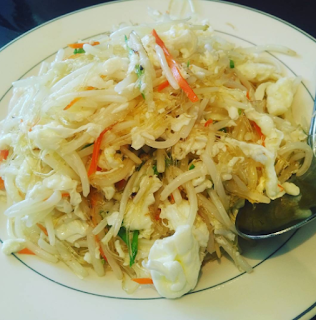 Many people say that Embassy Kitchen is as close to actually eating in Hong Kong as you can get in Los Angeles.  However, more than any Chinese restaurant in Los Angeles, Embassy Kitchen’s quality is driven by its owner-chef, Chef Yu, which probably explains in part its lack of widespread acclaim, with the stellar reviews of his cooking being offset by pedestrian reviews by diners who happen to eat there when he isn’t in the kitchen.  But in the long run, for those who dine at Embassy Kitchen on a recurring basis, this is a restaurant, the closest thing to artisan Chinese cooking that you will find in Los Angeles, that deserves to be considered among the best Chinese restaurants in the area.

Posted by Chandavkl at 11:12 AM No comments: