As anybody who has eaten Chinese food both in the San Gabriel Valley and in New York knows,  San Gabriel Valley Chinese food is far superior.  However, there are numerous New Yorkers who have never been in the San Gabriel Valley, and hence find it implausible that anything can be better than their Chinese food.  I tried to tell them that in my Top 10 Chinese Restaurants in the United States article that included no New York restaurants, and ended up with the internet version of being tarred and feathered by irate New Yorkers.  Furthermore, given that New York has a greater Chinese population than either Los Angeles or San Francisco, the thought of either of those California cities being superior in Chinese food to New York is that much more unbelievable to the doubting New Yorkers.

Fortunately, renown food writer Clarissa Wei has come to the rescue in her article "How Los Angeles Became A Powerhouse For Chinese Food".   Her well written and thoroughly researched article documents the underlying reasons why Los Angeles has the best Chinese food in the country and why New York doesn't.  Interestingly, my first contact with Clarissa was around three years ago on this precise topic.  Clarissa was a Californian who had gone to Manhattan to attend New York University, and who began writing food stories for The Village Voice in New York and L.A. Weekly back home.  While she had a general sense that New York Chinese food was inferior, that's not exactly the type of article you'd want to submit to The Village Voice.  In the course of our correspondence concerning the comparative status of New York and Los Angeles Chinese food, I happened to mention to Clarissa about my 6,000 Chinese restaurant visits and accompanying Excel schedule and she immediately jumped on that topic, interviewing me in person and writing the L.A. Weekly profile that quickly jumped to Huffington Post, People.com and then news and celebrity websites not only in the United States, but also Asia, Europe, Africa and who knows where else around the world.

Three years later Clarissa has written the definitive article on the topic.  In my short Menuism article on why New York Chinese food lagged California I briefly mentioned demographic factors distinguishing the New York and Los Angeles Chinese communities, such as the presence of large numbers of wealthy Chinese immigrants and their food centric "626 Generation" progeny.  Clarissa fleshes out these topics and discusses other factors, such as the arrival of highly trained chefs from China, a Chinese language foodie social media network (one Chinese language Facebook group devoted to spotting new Chinese restaurants has 4,800 members),  and competition of multiple emerging regional cuisines which raise the Chinese food bar in Los Angeles on an ongoing basis.  Clarissa notes that the 626 Night Market attracted a crowd of 40,000 on its opening night, and I may add gummed up Los Angeles freeway traffic for hours. 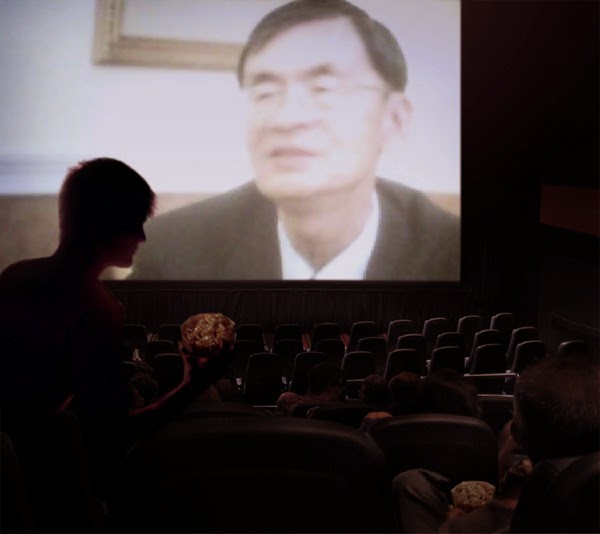 When I happened to be in New York last April when The Search For General Tso played at the Tribeca Film Festival, as I was looking at myself on the screen I tried to savor the moment thinking I might never view the film again.  After all, it appeared to be a struggle to get the film completed and onto the festival circuit, and I imagined the most we could hope for was an eventual DVD release, and I considered that a longshot.  Consequently it was a pleasant surprise last month to learn that the film had been picked up for limited distribution by Sundance Select, to begin showing in theaters starting on January 2, as well as video on demand.

Of course I still wondered whether the movie would play anywhere near me, so I was pleased that Arena Theater, a small art house in Hollywood near my home, was showing the movie from January 2 through January 8.  Furthermore, they scheduled a special screening this past Sunday with a bonus Q&A session with film producer Jennifer 8 Lee, hosted by KCRW food personality Evan Kleinman and Midtown Lunch blogger Zach Brooks.  It was a sold out crowd (which meant about 100 people in this small venue) and a great event.  I had been interviewed by Evan on her Good Food radio show a couple of years ago, right after Clarissa Wei's L.A. Weekly piece on my Chinese restaurant adventures  and had a nice chat with her before the screening.  Also I was looking forward to meeting Jennifer 8 Lee and Zach Brooks, but I didn't get to speak with either before the screening.

Watching the movie for the second time was in a way more interesting, since at Tribeca I was preoccupied waiting for my three minute appearance to arrive,  while this time I could give full attention to the movie's content. At the start of the post-screening Q&A I was surprised that Zack Brooks said he wanted to introduce a "celebrity" in the audience (which I did figure out was me, since I'm in the film), since I still hadn't spoken to him yet.  So even though the theater was fairly dark, I stood up and waved.  One guy in the audience yelled out "How do you stay so slim despite going to so many Chinese restaurants?"  I gave my standard "exercise and portion control" response.

After the Q&A, while most everybody else headed straight for the General Tso's chicken being served in the patio, I went on the stage to speak with Zack Brooks and Jennifer 8 Lee.  While waiting for Jennifer to free up, one of the other people waiting to talk to her asked me how I managed to eat at 6,000 restaurants, since that seemed to be such a daunting number.  Since it's a common question, I replied that if you do the math that's a restaurant a day every day for 17 years, but that I've been doing this for a lot more than 17 years.  I also explained that I eat up to four meals a day when I travel out of town, each at a different restaurant.  When I finally got to talk to Jennifer she gave me a warm greeting, and while I'm sure most people compliment her on her Fortune Cookie Chronicles book, I told her how much I enjoyed her New York Times articles on the Chinese community in New York ten years ago, and how they gave me such an insight.  After the screening, I got to meet Chowhound posters Mr. Taster and Dommy! and chat with a number of audience members on things like my most interesting restaurant find (Creasian in white bread Springfield, MO).  I would have liked to stay longer, but we had a family dinner scheduled and had to rush off.

Being in this movie was truly an adventure.  It was illuminating in seeing the process of making a movie, documentary or otherwise, which is such a time consuming and unpredictable process.  Two years after being interviewed for two hours, three minutes of the interview makes it to the screen, and which three minutes are included was from my point of view a random thing, so random that until the second viewing I couldn't tell you what I talked about in the movie.   I'm certainly not complaining at all since when I was interviewed by Ian Cheney and his crew at Mission 261 restaurant in San Gabriel, they arrived after I did because they had  just come from a prior interview in Pasadena with the founders of Panda Express at their headquarters--which didn't make it into the movie at all.

An interesting sidelight was that after the Tribeca screening, the movie was catalogued in the Internet Movie Data Base and I was given credit as being part of the "cast", and even being mentioned by named in the Variety review of the movie.  Unfortunately, IMDB confused me with a real actor named David Chan, who gained a small measure of fame in the 1990s Ninja Turtles movies, so I'm sure  he was puzzled to find The Search For General Tso listed as one of his credits.  However, with this year's theatrical release the IMDB entry cut out most of the interviewees from the cast listing, so it's off his resume now.  However the movie industry site The Numbers got it right, giving me my own page and listing me with one "acting credit".