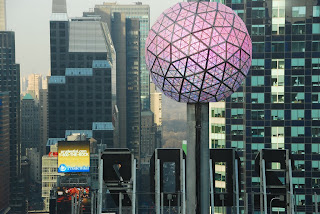 In honor of New Year's, here's a seldom seen view of the Times Square Waterford Crystal Ball.
Posted by Chandavkl at 8:26 AM No comments:

College bowl season is here and purists who would rather see a playoff system decry the ever increasing number of "meaningless" bowl games. But does anybody stop and ask why we have 34 bowl games now, with two more being added next year? Perusing the bowl schedule we see that of all the pre-January 1 bowl games, only two are not televised by ESPN or ESPN2, and indeed only one game is slated for ESPN 2. What that means is that almost all of the early bowl games have an exclusive time slot on ESPN. Obviously this means that the ratings for each game will be maximized. Indeed, ESPN has become the gorilla in the room when it comes to the bowl system. While a lot of college football fans make fun of all of the minor bowl games, the fact is that these bowl games have ratings that far exceed any comparable programming that ESPN could put up in the time slot. The New Mexico Bowl, as minor as the bowls get, draws something like 3 million viewers. That's almost double the highest rating one can expect for a showcase regular season basketball game.

The power of ESPN can be demonstrated by UCLA's appearance in the Eagle Bank Bowl in Washington DC. Traditionally PAC 10 teams do not play in bowl games east of the Mississippi River, except for BCS appearance, because none of the PAC 10 teams travel well enough to warrant an invitation. Even relatively high profile non-BCS bowls such as the Gator Bowl or the former Peach Bowl (whatever it's called now) would never consider inviting a west coast team.

Everything else being equal, one would expect UCLA to be playing in the Humanitarian Bowl in Boise against Idaho. So how did UCLA end up in a regional east coast bowl game instead? Two reasons, both ESPN related. First of all putting UCLA in the Eagle Bank Bowl would give the game TV ratings far higher than any other opponent, as it would capture the lucrative Los Angeles TV market. Secondly, if UCLA played in the Humanitarian Bowl, it would mean that one of ESPN's other bowls would be stuck with two also ran teams out of the mid-American conference. While it is true that most any game with a bowl label will draw a significant TV audience, that is because people like watching bowl games to see matchups that they otherwise wouldn't see during the regular season. A game between two second tier teams from the same mid-major conference probably wouldn't draw a viewership beyond the players' families.

Note that this "made for TV" bowl schedule now extends to college basketball, with all of these preseason tournaments with top teams from all over the country that are played in empty arenas. These tournaments are supported entirely by TV dollars, with live gate not even being necessary.
Posted by Chandavkl at 8:07 AM 1 comment:

Putting the aside of what size club Mrs. Woods used to pummel the Tiger or how many more girlfriends he has to pay off to keep quiet, another major issue relates to Tiger Woods' request for privacy and whether he's entitled to it. Some people think his private life is his private life and he should be left alone. However, the fact is that Woods owes his fame and fortune to being in the public limelite, and to then ask for privacy is an unreasonable request. A person who is a celebrity, and who has gotten rich off that celebrity cannot have it both ways. Indeed this is seen in the legal system where the standards for proving libel or slander are considerably more difficult when the claimant is a public figure. On top of everything, given Woods' notorious reputation for controlling his public image, his plea for privacy just doesn't fly.
Posted by Chandavkl at 10:09 AM No comments: