Here in Los Angeles you can't turn on the radio or television, read the newspaper, or even drive on any freeway in the region (including the San Joaquin Valley!) and not know about the upcoming closure of a 10 mile stretch of the San Diego Freeway for the entire weekend of July 16 (including late Friday night and early Monday morning). And it's not any 10 mile stretch of the I-405--it's the stretch between the Santa Monica Freeway and the Ventura Freeway, which practically speaking is the only route that connects the San Fernando Valley and West Los Angeles.

Given the car culture of Los Angeles where people will drive two blocks to go to the gym, this portends a traffic jam of massive, if not biblical proportions. I remember maybe 10 years ago when a traffic accident closed the Hollywood Freeway for several hours on the portion that connected Hollywood to the San Fernando Valley. That created the worst single point traffic jam that Los Angeles has ever seen (the overall congestion for the 1992 riots was worse). Since the accident blocked traffic from going from Hollywood to the Valley, when I left my office in West Los Angeles and headed home to the Hollywood Hills, I didn't think I'd be affected since I was going completely in the opposite direction, and nowhere near the San Fernando Valley. Wrong. Cars looking for a way, any way to go west and north into the Valley clogged the streets in my eastbound direction, as they drove round and round in vain for a clear path home.

Now the San Diego Freeway is not literally the only way to get from West Los Angeles to the Valley. There's Sepulveda Blvd., which largely parallels the freeway. But wait, Sepulveda will be restricted, too. Presumably those working on the freeway construction need that street for their own access, as well as local access for neighborhood residents. Also, there are the canyon roads like Beverly Glen, Coldwater Canyon and Laurel Canyon that connect the Valley to the Westside. Plus there are those secret residential shortcuts that can get you from here to there if you know where to make the correct turns. But no way can they handle more than a small portion of the traffic between the Valley and the Westside.

Optimistically our city fathers point to the 1984 Olympics as demonstrating that advance warning as to potential traffic gridlock will lead to smooth flowing traffic as people avoid the trouble spots in droves. Actually, I think a better precedent is in the Bay Area, when the Bay Bridge between San Francisco and Oakland was closed for Labor Day a couple of years ago, and traffic turned out to be fine. Theoretically that should have been worse since there are fewer ways to cross San Francisco Bay than to get between West L.A. and the San Fernando Valley. Hopefully that will be the best portent of what will actually happen.
Posted by Chandavkl at 10:19 AM 2 comments:

E3 Entertainment Expo May Be The Noisiest Place on Earth 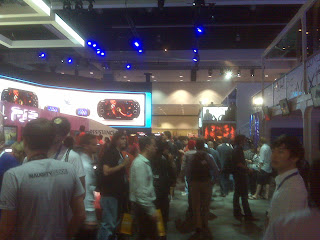 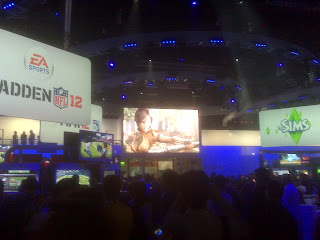 Of course, while I am an annual visitor to this signature trade event of the video game industry, don't mistake me for a gamer. Indeed, I haven't played a video game since 1989, when I finally defeated the dragon at the end of Super Mario 1, after several months of trying. At that point I decided to retire undefeated from video gamedom, having nothing else to accomplish.

So why do I go to E3 every year, or for that matter, how do I even get into this event which is not open to the public? Well, it goes back over a decade ago when I received an unsolicited free pass to the event (presumably as a finance professional), which had just relocated from Atlanta. It was a Friday afternoon and things were a little slow in the office with the April 15 tax deadline having passed. The name "E3" is short hand for electronic entertainment exposition, and I really thought I was driving downtown to see the latest in home theater equipment and stuff like that. Obviously, I was mistaken.

But that still doesn't answer why I continue to attend the event every year. Well, first is the spectacle of it. Tens of thousands of industry professionals swarming inside the convention center, with hundreds if not thousands of video game consoles for people to play with. Many attendees are armed with video cameras to capture the details of the newest video games--perhaps an unparalleled opportunity to check out the competition, while others settle to capture the event with still cameras. Another interesting element to the crowd is the high proportion of nerdy looking Asian attendees, particularly nerdy looking Asian women, who I take to be game designers and engineers, as they certainly don't look like gamers. Also the appearance of celebrities adds excitement to E3, though all I ever got to see was the top of Paris Hilton's head.

Then there are some of the over-the-top promotions that some of the vendors will engage with, like the video game Homefront, involving an invasion of the United States by the North Korean army. The makers of that game requisitioned the parking lot across the street from the convention center, tied small North Korean flags to all the cars parked there, and hired dozens of actors dressed like North Korean soldiers. And oh, the entrance to the parking lot was rechristened as a military checkpoint.

But perhaps the main thing is the exclusivity of it. E3 garners heavy coverage both in the press and on the TV news, and is always caveated as an industry only event that is not open to the public. Millions of gamers across the United States, and indeed the world, would give their right arm to gain admission to the event. But I can get in and they can't.
Posted by Chandavkl at 5:03 PM 1 comment:

An Unexpected Reminder of a Past Trip--and Meal

In the fall of 1994 I attended what turned out to be my final training session for Kenneth Leventhal & Company before its merger the next spring with Ernst & Young. The training was held in Glen Cove on Long Island, and because we had been to Manhattan on vacation just a few weeks earlier, I had no intent of visiting Manhattan on this trip. There were just a couple of us from Los Angeles at the training, and the session ended too late to catch a flight back home the same day. At dinner in Flushing, Rick Schneider mentioned that he had never been to Manhattan, so I offered to drive him straight to Manhattan after dinner. In probably no more than an hour's time, we drove to Manhattan, saw the sights such as Central Park, Radio City, Times Square, and the World Trade Center, and drove back across the East River. I think Rick was especially impressed by my ability to drive the streets of Manhattan like a cab driver. While normally a laid back and courteous drive, I had learned that my old driving habits would have left me stationery as all of the other cars maneuvered by. My only driving slip up was when we drove into Brooklyn and somehow I got off the freeway into a suspcious looking part of town. Furthermore we had to pull into a gas station because Rick had to use the bathroom. It was much later that I discovered we had been cruising the streets of Bedford Stuyvesant, indeed not a particularly good neighborhood at the time. But Rick was impressed with my abilities as a tour guide and told everybody in the office about our adventure when we got back in L.A.

Having enjoyed my unplanned jaunt into Manhattan and not flying out until afternoon, I decided to drive back into Manhattan early the next morning to explore the expanded part of Chinatown that I had visited a few weeks previously. I can't say I remember much about that journey over 16 years ago, though since I do keep an Excel schedule of Chinese restaurants I have eaten at, I do have the names and addresses of every restaurant on this and other visits. All this leads up to a posting on the Chowhound New York message board where somebody asked for the name of the restaurant that was at 237 Grand St. in Chinatown in the early 1990s, and whether they served Chiu Chow style noodle soup. That location is currently occupied by Quikly Shabu Shabu, and since I make special note of addresses where I have eaten at multiple Chinese restaurants, I knew the restaurant that I had gone to that morning at that address was called Golden Statue. I didn't remember anything about my meal there, but I did find the business card I took from there, which described the restaurant as a bakery and restaurant. That led me to believe that it was one of those dim sum bakeries that are common on Grand St. and throughout New York Chinatown, and therefore had not been a Chiu Chow noodle house. But then, out of curiosity I did a Google search for Golden Statue on Grand, and voila. There was a New York Times article from 1997, 12 pages long, giving a detailed tour of a long stretch of Grand St. And included in the story was a short paragraph describing Golden Statue as a Southeast Asian and Chinese noodle restaurant. All of a sudden it came back. I had ordered the fish ball soup to go from Golden Statue, for something like $2. There were five large fish balls in the soup. I walked over a block and a half to Sara Roosevelt Park, sat at one of the park benches, and consumed my soup. Since then I've used that park many times as a dining area during my food crawls through Manhattan Chinatown, but until just now I had forgotten that fact.
Posted by Chandavkl at 10:08 AM No comments: