The concept of fine Chinese dining in Los Angeles is a recent one, and one which does not have a very deep roster. Consequently it's surprising to find a self-proclaimed (see picture), and indeed based on their pricing in fact, fine Chinese dining restaurant open in Koreatown. 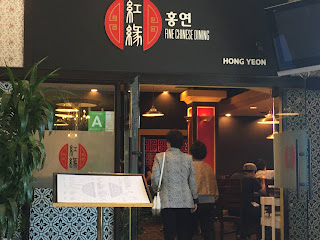 Now finding such an animal in Koreatown would not be a surprise since Koreans like their brand of Chinese food, and there are a lot of expensive places to eat in Koreatown. No, what makes Hong Yeon surprising is the totality of its location. Hong Yeon is located in the Rotex Hotel on Olympic Blvd. at Gramercy Place, which looks like a very nice place to stay. But here's where things break down. The way Hong Yoen is configured, the back of the kitchen looks out to the side of Gramercy Place, directly onto a homeless encampment. Which explains why the entire front entrance to the hotel on Olympic is blocked off, and there is only one small entrance to the hotel, off of the rear parking lot. Oh, and then there are the room rates, which run roughly $100 a night, explaining why the hotel was apparently sold out when I dropped by.

As you can see, the Hong Yeon dining room was full when I was there, with a crowd having the wherewithal to have an expensive meal. 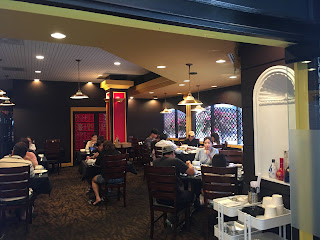 And as I mentioned the restaurant charges fine dining prices. All I could afford was the sweet and sour fish fillet, which set me back $40. It was actually quite different from the typical deep red sweet and sour sauce you see at most Chinese restaurants, rather a tan colored gravy chock full of vegetables and wood ear fungus. Not a bad meal at all. But those prices--I would be hard pressed to find an item on the menu that wasn't a top of the market price. And set dinners are as much as $100 per person. 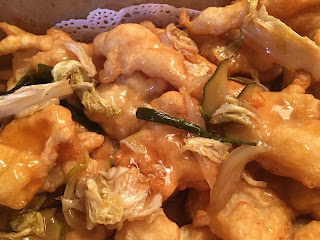 If this hotel and restaurant were located someplace else in Koreatown with typical Los Angeles hotel room rates, it would make perfect sense.  But as is, I'm baffled.

Perhaps the answer lies in its relative proximity to the USC campus.  USC has one of the largest population of students from Mainland China attending American universities.  Yet, the number of authentic Chinese restaurants proximate to the USC campus is fairly small, none serve what may be considered Mainland style food, and the food trucks which used to park along Jefferson Blvd. offering Mainland style Chinese food appear to have all disappeared.  One suggestion is that the USC Chinese Mainland crowd likes to patronize restaurants in Koreatown, as there is some similarity between Korean food and the Chinese food in the northern parts of the Chinese mainland from where many of the USC students originate.  And since the Mainland Chinese crowd is known to be well heeled, perhaps they may be patronizing Hong Leon.

The expansion of the Chinese community in the Los Angeles area which started roughly 60 years ago as Chinese Americans broke out of segregated housing within the City of Los Angeles into newly constructed suburban homes in Monterey Park, has been one incessant eastward march.  I don't know about other geographic areas, but Chinese Americans in Los Angeles have a fixation on recently developed housing communities, and over the decades the path of new upscale housing community construction has been decidedly eastward, because that's where the vacant land has been.  And in particularly, a sizable portion of this development has been along the San Bernardino Freeway and Pomona Freeway corridors, resulting in an ongoing eastward march in the development of Chinese communities.

One slight outlier to the overall pattern has been the Rancho Cucamonga area, which while definitely east of Los Angeles, is further north, straddling the 210 (Foothill) freeway corridor instead.   Rancho Cucamonga is the city made famous by Jack Benny’s mythical train route that stopped at Anaheim, Azusa and Cooocamonga. Though people in Los Angeles are familiar with those cities, apparently the radio audience across the US found those names wildly hilarious and the names were a running joke for years.  There's even a Jack Benny Drive in Rancho Cucamonga today.   Like virtually every town in California in the late 19th and early 20th century, Cucamonga did have a Chinatown.  But if there were any Chinese residents there back when Jack Benny had his show, they would have been farmers or farm workers as residential housing was highly segregated in LA into the 1960s and 1970s.

Rancho Cucamonga first came on my Chinese food radar around 20 years ago, when the 99 Ranch Market Chinese supermarket chain opened up a branch on Foothill Blvd.  (Indeed, I"m in awe of the market research capabilities of the 99 Ranch Market in their ability to be the first Chinese business to open up in new burgeoning Chinese communities across America.)   At that time just a couple of Chinese restaurants opened up nearby the 99 Ranch store serving authentic Chinese food, but also with a menu friendly to non-Chinese locals as there wasn’t the critical mass of Chinese residents for dedicated authentic Chinese restaurants. But it was probably four or five years ago that the Chinese influence in the area really began to grow, with anecdotal information that perhaps 75 percent of the residents in a particular housing development in Rancho Cucamonga called Bella Vista were Taiwanese.  That warranted a return visit to the area to check out more new Chinese restaurants.

After that visit I began to hear more and more about authentic Chinese restaurants opening in Rancho Cucamonga, so I decided a couple of weeks ago to make a side trip on my way back from Orange County to Los Angeles via Rancho Cucamonga.   Mindful of the Taiwanese bent of the new Rancho Cucamonga Chinese community, I marked off Jo Jo's Kitchen: Taiwan Eats as a must visit location.  However as I drove along Arrow Highway I was a little puzzled because I didn't see any kind of storefront that would contain a Taiwanese restaurant.  But I did see something with a large parking lot called Haven City Market, so I pulled in and got out.  That's when I learned that Haven City Market was a large food hall, where Jo Jo's Kitchen: Taiwan Eats was located. 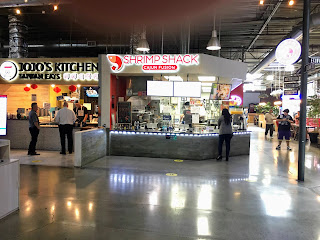 Of course the problem with doing a food crawl 50 miles away from home is that you have to limit what you can order.  Even with a relatively short menu, making a choice at Jo Jo's Kitchen: Taiwan Eats was difficult.  Beef noodle soup?  Fried pork chop?  Taiwanese sausage?   Tomato and egg?   Actually for me the choice was clear--popcorn fish, which is something I really like, and don't see on too many menus.  And of course it was great and I’m wondering when I can get back to try more items from the menu. 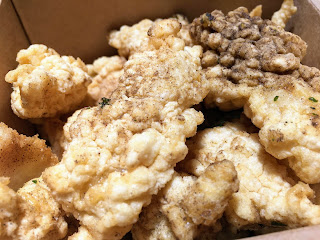 Actually the entire Haven City Market was a revelation to me.  Indeed, finding this food court here was downright shocking on a number of levels. There are 30 vendors in a spacious and bustling hall, most of which are ethnic and many of which are Asian. 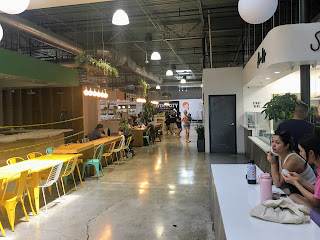 And most unexpected is Saibadee which serves Lao and Thai street food.  I'm not sure where you could find anything like this food alternative closer to Los Angeles.  Why it's available here puzzles me. 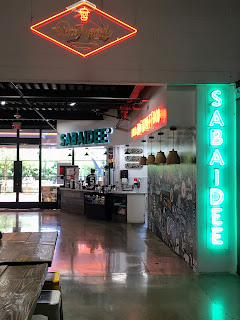 Rancho Cucamonga had other surprises, too.  When scouting out restaurants, I came across China Republic, which I saw from its menu had an impressive selection of dim sum.  Once again I was surprised by the venue, which turned out to be different from any of the dim sum restaurants I patronize in the Los Angeles area.  As you can see, the clean lines and subdued lighting are something you don't see in the dim sum palaces in the San Gabriel Valley or anywhere else in Los Angeles. 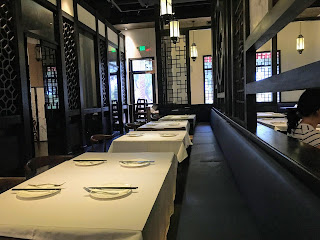 The dim sum was good quality, higher than I would have expected in Rancho Cucamonga.  This is their scallop dumpling. 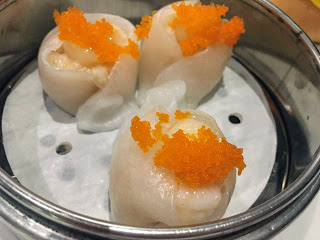 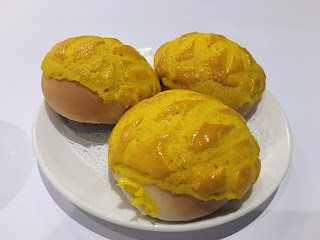 The bar area is consistent with the upscale ambiance. 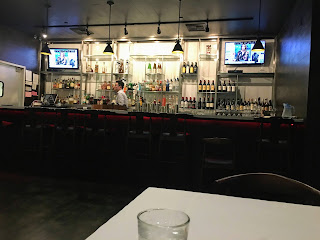 Once again, an unexpected encounter and something quite different from what I was used to.

I was also able to visit Dumpling Village.  Interesting to find an entry for beef pies on the menu, an indefinite term which can mean different things at different Chinese restaurants.  In this case, the reference is to beef bings, which are a little more difficult to find in the San Gabriel Valley these days ever since the demise of the premier purveyor, Beijing Pie House, followed by the rebranding of the next best supplier, Tianjin Feng Wei into Ace Burgers, specializing in knock offs of the spicy chicken sandwiches produced by the Shanghai branches of KFC and McDonalds.  This was a good version. 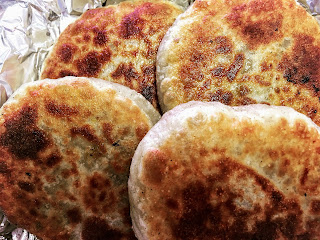 Anaheim, Azusa and Cucamonga may have been a big joke to national radio audiences many decades ago, but the Chinese food in Rancho Cucamonga these days is certainly no joke.

Posted by Chandavkl at 7:42 AM No comments: