It was a fun day in Chinatown last month as I did a four hour video shoot for the China Global Television Network's US arm out of Washington DC and their video series Tso'l Food (as in General Tso) surveying Chinese food in different American communities.  They contacted me a few weeks previously saying they were coming to Los Angeles and found my restaurant list and my knowledge of the local Chinese restaurant scene to be interesting topics, so I said I'd be happy to participate.
Preliminarily I had been corresponding with a producer, a guy named Lionel Lim who indicated their thought was to interview me at two different Chinese restaurants where we would eat the same dish, except that one would be at a traditional Chinese restaurant and the other would be at a modern Chinese restaurant.  Since they were from Washington DC and not that familiar with our Chinese food, I first suggested that the modern restaurant could be Pearl River Deli in Chinatown.  They were somewhat familiar with Pearl River and bought off on that idea right away.  I am slightly acquainted with the owner, Johnny Lee, and offered to approach him about participating, and Johnny agreed, requesting that we come late in the afternoon when the restaurant was the slowest.
With that in mind, I figured if that would be the second meal of the interview, we should decide on the specific dish well in advance, so we could locate a suitable nearby restaurant that served something similar, so we chose the charshu noodles off Pearl River's standing menu, rather than something more adventuresome off the ever rotating menu.  At that point I needed to figure out who in Chinatown served charshu noodles for the traditional rendition of the dish, which baffled me for a while, since there are no dedicated Chinese noodle shops in LA Chinatown (just Vietnamese).  However I did figure that there would be regular Cantonese restaurants in Chinatown that served that dish as part of their larger menu.  But I really wasn't that familiar with the restaurants in Chinatown, nor did I know any restaurant owners.   Then I remembered I had developed an internet relationship with Hop Woo restaurant, when I Tweeted about their Go Fund Me effort during the depths of the pandemic and they thanked me for it, and again likewise when I bought a copy of their vanity fundraising books and posted a picture on Instagram.  So I took a peek at their menu and saw they had charshu noodle soup.  And very coincidentally the next day I made an infrequent solo trip to Chinatown to pick up some food for guests who were coming over to our house, so I dashed over to Hop Woo to see if they would participate, and they agreed.
Wednesday was the day selected for the interview because Pearl River closes on Monday and Tuesday.  By this time, Lionel and the program host, Gerald Tam, had learned enough about Pearl River that they decided to do a profile of that restaurant for their LA program.  Mrs. Chandavkl dropped me off at Hop Woo at 11:30am and both Lionel and Gerald were waiting.  Though I had only dealt with Lionel previously, essentially when it came down to the program itself it was almost dealing exclusively with Gerald, who clearly was in charge of the show once they were on the ground.  In speaking with Gerald he revealed something which was interesting, and actually quite shocking.  You see I thought they were systematically investigating Chinese food in all the major cities and that Los Angeles was their next choice, but Gerald said that their primary objective was to come out to LA was to interview me, and only after I accepted their offer to be interviewed did they plan out other segments to shoot in Los Angeles to fill out the program.  How flattering!
Besides Gerald and Lionel, there were two camera operators,  Dan Criswell and Eric Courtney and another field producer, a gal named Yao Yanan.    It turned out that food was a sideline topic for this crew and they covered all categories of news stories, all around the world.  Even though Hop Woo no longer had outdoor dining, it was determined that our interview would be best conducted outdoors, presumably for lighting purposes.  It was interesting doing an interview with all the traffic noise (not to mention the occasional screaming homeless person walking by), but from their point of view it just added ambiance to the soundtrack.   Basically we spent three hours at Hop Woo, discussing various topics about Chinese food in Los Angeles and America, over two bowls of charshu noodle soup.   The crew kept apologizing for the various factors that made the shooting time so long, but I told them I was quite used to the process   (As I recall my KCET taping with Clarissa Wei ran five hours and our on screen time was under five minutes.)  I did feel sorry for the waitress, however, whose delivery of our meal had to go through four takes. 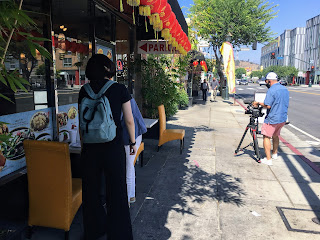 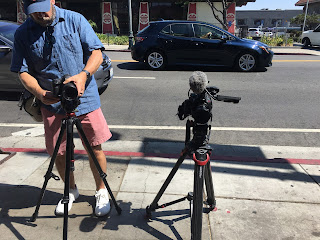 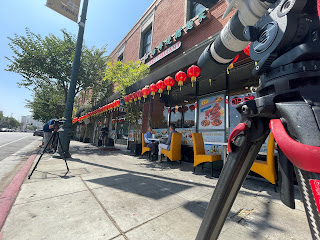 At the end of our discussion of our meal and my eating history, I learned had one additional function in the program.  The program visited four different Chinese eateries that week, and on top of my personal interview, they essentially asked me to do a short monologue on each of the four--Pearl River Deli, Phoenix Bakery, Bistro Na and a restaurant called Xiang La Hui.  Fortunately I was able to do that satisfactorily off the top of my head, each in one take. 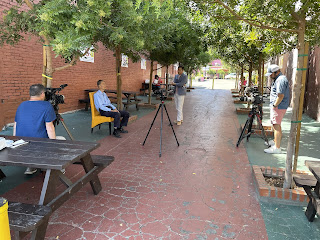 Finished at Hop Woo it was time to go the two blocks down Broadway to Pearl River Deli.  Strangely they asked me if they should call a cab for me instead of walking.  Uh, no, Mrs, Chandavkl and I go on five mile hikes.  Good thing I didn't take a cab, since they actual filmed the last block of our walk down there. 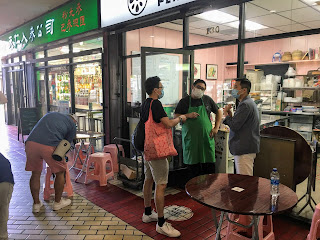 At Pearl River Deli we sat down and discussed how Hop Woo represented traditionally prepared Cantonese food and how Pearl River Deli represents the second generation of Chinese American chefs, most of whom either had developed culinary skills in the western cooking world, or in some cases pivoted from investment banking or other non-restaurant related fields. 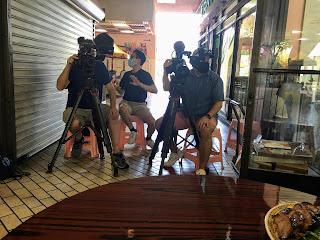 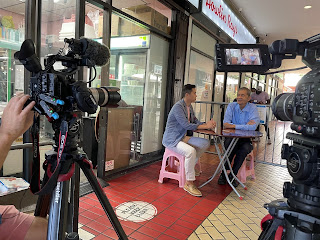 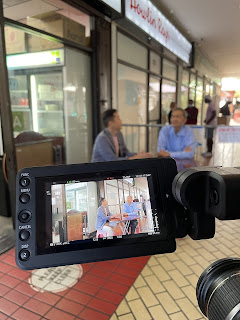 When the charshu noodles came out, Gerald started gushing about the mere visual appearance of the charshu.  When he bit into the charshu, he raved about it.  And when he started eating the noodles he was literally stunned by the flavor.  I was happy I made a good choice, though I certainly didn't consider the food that overwhelming.  Indeed, Gerald shared most of his charshu with the other crew members and they all went wild, too.
Since the series is named after Tso of General Tso's Chicken, Gerald asked for my opinions of the dish.  I think he was surprised when I told him that General Tso's Chicken is not very common in California, having been pre-empted by orange chicken.  Indeed, Panda Express, which probably pre-empted General Tso's Chicken from being widely found in California, did subsequently add General Tso's Chicken to its menu, but then quickly removed it.  I recounted how when we were setting up my interview several years ago for the In Search of General Tso movie, the director initially wanted to film at a restaurant in the San Gabriel Valley that served General Tso's Chicken, I had to inform him that such a restaurant didn't exist for two reasons.  First of all there were virtually no Americanized Chinese restaurants in the San Gabriel Valley.  And secondly, General Tso's Chicken was not commonly found in California.
At this point they said my part was over and I could leave. After that I left, while the rest of them went into the kitchen to shoot their feature on Pearl River Deli. 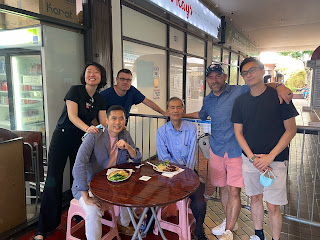 In addition, during the Hop Woo portion of the shoot, Gerald mentioned that they were planning an additional taping session on Sunday morning for all of the people they would be interviewing during the week, sort of an informal wrap-up of the Tso'l Food edition from Los Angeles.  They first suggested someplace in Chinatown, but I commented that the food in Chinatown really paled to that in the San Gabriel Valley, so they agreed a San Gabriel Valley venue would be more appropriate.   However, as I then pointed out it would be difficult finding a Chinese restaurant which would reserve you a large table around 11 am on a Sunday morning, probably the primest of prime time for large Chinese restaurants, plus permit the disruption of their business with the camera crew.  A couple of days later, they sent me a message that they were able to reserve a table at Mr. Champion, a Hong Kong style breakfast restaurant in Arcadia, so I was glad they figured that part out.
Arriving at Mr. Champion Sunday morning, I wondered how many people would show up.  For sure Johnny Lee wouldn't since Sunday was one was one of the four or five days a week that Pearl River Deli was open.  Though I arrived a little after 11am, I was the first guest to arrive, and was told to sit at a card table sized table set up in front of the restaurant.  Then Gay Yuen, Chair of the Board of the Chinese American History Museum of Los Angeles, who had done a video segment on the history of the Chinese in Los Angeles came a few minutes later--and that was it.  Not surprisingly, all of the other interviewees for the week were hard at work that Sunday morning, so it was just Gerald and the two of us.   I introduced myself to Gay, who said "I know who you are!"   I knew who she was, too, since she went to Marshall High School at the same time ("Yay, Marshall! she said) as Mrs. Chandavkl, and they shared common friends.  We had a very nice conversation about the Chinese in Los Angeles, Chinese food, our meal of fish cheung fun, dried shrimp cheung fun, you tiao, a.k.a. Chinese crullers and beef brisket lo mein (see Gerald's Instagram post below), and other related topics.  (Gay also gave everyone enough pu-er tea to produce several pots, in a tangerine peel wrapper.) I asked Gerald how they would manage to put all the raw tape together into a coherent product, and how long it would take.  He said the first step would be for the production team to transcribe the entire audio, then they would start snipping and putting things together, going through numerous drafts and kicking around ideas, a process that would probably take weeks.  It will be interesting to see what portion of that conversation makes it in to the final show, as well as all the other tape they shot with me.   The session ended when Gerald and his crew had to pack up to do a shoot by the Hollywood sign, ironic since I headed home in the exact same direction. 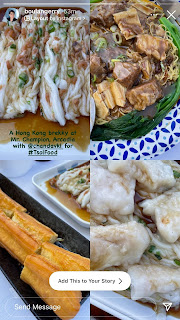