An Encounter With Fine Dining At Providence on Melrose

As I have written on many occasions, I'm not a foodie because my interest in food, and obviously more specifically, Chinese food, arose from my interest in the larger topic of the history and culture of Chinese-Americans.  In the United States, Chinese food and fine dining have seldom intersected, at least on a historical basis, with Chinese food being more associated with reasonably priced food, or in the eyes of many, "cheap" food, or perhaps alternatively described as more practical dining from a price point of view.  Consequently, with my goal of maximizing my Chinese eating experiences, fine dining is something which I only occasionally engage in.

On the other hand, when you have Millennial children, it's difficult not to be exposed to some extent to the outside foodie world.  Consequently that's how I found myself at the late Jonathan Gold's #1 restaurant choice Providence, for their $185 tasting menu.  The tasting menu dinner at Providence was not a total shock to us since we had gone to the $100 tasting menu at Chicago's Sepia Restaurant last September.  I'd say that without that experience, dinner at Providence would indeed have been a totally out of body experience. 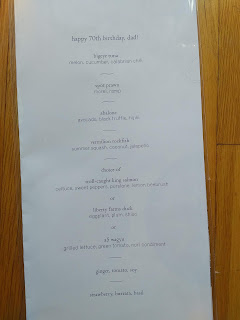 Dinner started first with appetizers.  The first round came on giant pieces of driftwood which dwarfed the appetizers themselves, making the search for the appetizers like an Easter egg hunt.   Indeed a creative way to make two small appetizers look like something special. 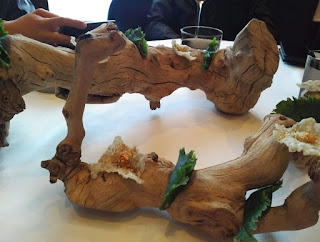 The next pair of appetizers featured a combination of crab and corn, with a crab/corn bisque and a crab and corn tartlet.  (There were other appetizers that I didn't keep track of.) 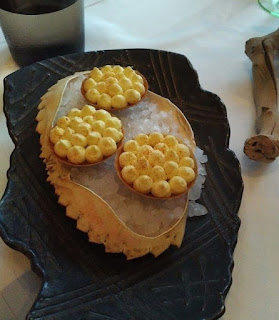 First plate up was the bigeye tuna with melon balls. in a light chili sauce  I can see why Providence is so highly rated due to the combination of diverse ingredients, that work so well. 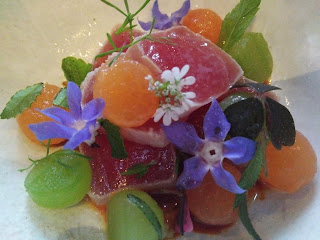 An add-on to the tasting menu at $24 was the uni egg, one of the restaurant's signature dishes.  Never thought I'd ever try uni but I'm glad I did., though the egg yolk at the bottom of the real eggshell was meh.   Also the presentation was rather odd, considering how Instagrammable everything else was. 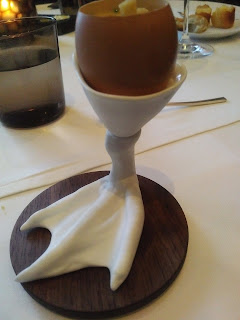 Next up was the spot prawn with Oregon morel.  The morel was one of a number of diversely sourced ingredients.  Somehow the prawn was more reminiscent of lobster than shrimp.  As much as I hate mushrooms, the morel was OK. 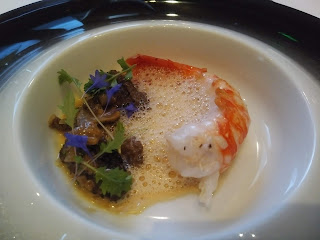 The unanimous hit of the night was the Hawaiian farm raised abalone with truffles and avocado.  What an amazing combination of flavors! 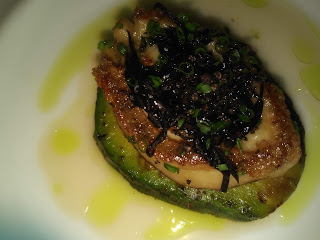 Probably the least impressive item of the evening was the rockfish.  Not to say it wasn't good, but comparatively it fell short of the others. 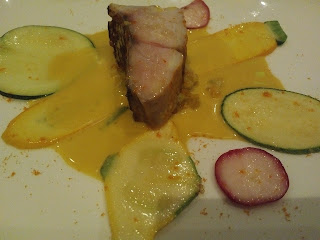 We split two main "entrees".  The wagyu with a drizzle of nori seaweed on the side was richly delicious.  Biting in the beef produced an almost liquid like sensation, which I'm sure isn't terribly great from a health point of view. 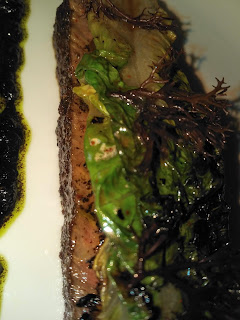 The second entree was the duck, which visually looked just like beef and was quite tasty. 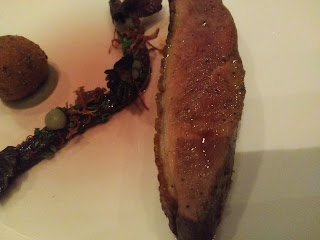 Dessert was preceded by a palate cleanser of tomato sorbet with herbs on the side. 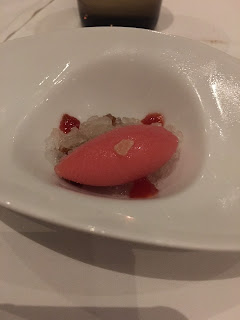 And the wonderful meal was capped by strawberry gelato accompanied by a whipped cream replacement of barrata.  Never would have guessed. 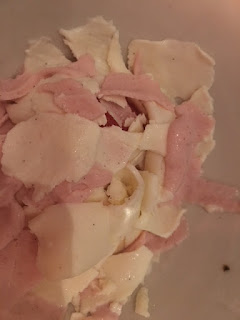 But wait!  There's more.  After the meal we were escorted for a peek at the kitchen.  It's incredible how such a signature restaurant can operate with such a small kitchen.  My only thought as to how they pull it off is that their reliance on tasting menus with spaced out dishes permits them to operate in this manner. 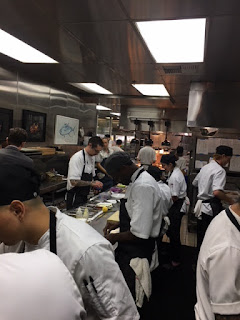 Definitely a magical evening of dining.

Posted by Chandavkl at 2:09 PM