Thanks to Uncle Tetsu in the Westfield Santa Anita Mall, Japanese cheesecake has hit the local radar like a hurricane, resulting in the most ridiculous lineup queue in that part of town since Din Tai Fung (whose flagship location is just around the corner).   Fortunately somebody else stood in line so I could get my taste of Uncle Tetsu's cheesecake, which I would describe as good, but not great.

Naturally the success of Uncle Tetsu has encouraged others to follow suit, and perhaps best known is Teto Sweets, 610 E. Garvey Ave., Monterey Park, which has become a satisfactory replacement for those unwilling to battle the lines at Uncle Tetsu.  Teto Sweets opened a few months ago, and is located in a nondescript structure on the corner of Garvey and Rural Dr. which I missed completely when I first drove there, and had to drive around a very long block to finally make it there.   I would also say that the name of the eatery is misleading, as it implies that it is primarily a dessert shop where the cheesecake is the only real dessert item on the menu.  Teto Sweets' Japanese cheesecake is like that at Uncle Tetsu,  good, not great.   However in fact while the cheesecake is good, but not great, great certainly does exist on the rest of the Teto Sweet menu.

So if the Japanese cheesecake at Teto Sweets is not the star of the show, what is?  Well that distinction belongs to the Golden Fried Bao which look as good as it tastes. 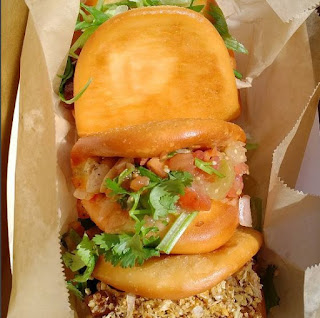 Think of your favorite Gua Bao from Baohaus or Taiwanese restaurant in the San Gabriel, but take the mantou bun and deep fry it to a golden brown.  That's the Golden Fried Bao at Teto Sweets.  The Golden Fried Bao comes in three flavors, Peking duck, chicken salsa and, naturally, pork belly.  The deep fried buns have a milky consistency, with just a hint of sweetness.  All three varieties are outstanding.

Also on the menu at Teto Sweets are Teto pancakes, sandwiches with a crunchy pancake wrapper with fillings like the abovementioned duck, chicken and pork belly choices, as well as others like spam and kalbi.  Other innovative dishes on the menu include mapo tofu fries and beef bone sticks. Also the obligatory selection of coffee and tea drinks.

So to turn around the well known restaurant slogan, when it comes to Teto Sweets, it's "come for the cheesecake but stay for the rest of the menu."
Posted by Chandavkl at 12:26 PM No comments:

While my previous L.A. Weekly article on Chinese food for Mainland students at USC focused on the Chinese food trucks parked near the international student housing at Jefferson and McClintock, there are a few other alternatives for the Mainlanders.  Most obviously, the students can get in their cars and drive to the San Gabriel Valley, which is less than 15 miles away, though this is not advisable during rush hours.  Indeed, prior to the recent Chinese restaurant openings on the Westside catering to UCLA students that this was a common option for Mainland UCLA students, so this is just a continuing option for USC students.  However, a couple of other alternatives were also mentioned on the Food Talk Central message board.

You might think it's being presumptuous in assuming it's just rich Mainlanders at USC taking advantage of this delivery option, particularly since several students can go in together with a group order and make the delivery charge per head quite modest.  However apparently the San Gabriel Valley Chinese food delivery businesses also do a thriving business delivering food to Mainland students at UC Irvine.  And for a delivery charge of $45, clearly those deliveries are concentrated in the rich Mainlander crowd.  Now why would a rich UC Irvine student pay $45 to have authentic Chinese food delivered from someplace like Alhambra when Irvine itself has dozens of authentic Chinese restaurants, all within convenient driving distance in your Maserati or Lamborghini from your campus digs?  The answer lies in the fact that Irvine's Chinese restaurants skew toward their Cantonese and Taiwanese residents, meaning Cantonese, Taiwanese and Shanghainese style food. Irvine has only a small (though growing) number of Sichuan and other Mainland type Chinese restaurants (though strangely including a Uyghur restaurant), so if you really want the food of your home province and have money to burn, delivery from the San Gabriel Valley is an attractive option.

Another USC Chinese Mainlander food source, quite interestingly, is Lao Sze Chuan restaurant in Glendale.  Lao Sze Chuan is a Chinese restaurant chain originally out of Chicago which developed national ambitions.  The fact that the driving force behind the enterprise is now in prison for tax evasion has not stopped the national expansion plans which has seen branches open in the Palms Casino in Las Vegas, Phoenix, and here in Glendale.  With the lack of Sichuan food in Los Angeles Chinatown, Lao Sze Chuan is the closest source of this authentic cuisine  so its attraction to USC students makes some sense.  On the other hand it would seem that it's not that much closer distance wise to USC than the San Gabriel Valley, so you'd think that going to Chengdu Taste or Szechuan Impression might be worth driving an extra couple of miles.  Of course the other neighboring amenities of Glendale, such as the Galleria, Americana and movie theaters could also be a factor in drawing USC Mainlanders here.

One last point raised on the message board was the assertion that a lot of USC Mainland Chinese students don't actually set foot on campus, but are rather whooping it up somewhere in the San Gabriel Valley and hence don't need a campus source of Chinese food.  Rather, these students purchase their degrees by having surrogates attend classes and take their tests, which makes some sense given the extreme wealth of some of these students.  It might sound fanciful to think that this happens on more than just an isolated basis.  However, it may well be true, as a scandal recently broke out at the University of Iowa, reported in detail in a Reuters special report, involving an organized ring that was involved in exactly these activities by dozens of Mainland students.