I can't say that anything about inefficiency in government surprises me any more, but I've heard about a couple of more blood boiling episodes. First of all, the Iowa egg salmonella outbreak demonstrates once again that too many cooks spoil the broth. What is the government agency that oversees the processing and sale of eggs? The answer is, it depends based on whether the egg has been processed or not. If the eggs are not yet processed they're under the purview of the Agriculture department. After processing, it's the Food and Drug Administration in charge. As you know, the USDA focuses on things like grading agricultural products, so with eggs they're only concerned with the physical attributes of the egg and it's not their job to determine if the product is safe. That part falls on the FDA. Did anybody consider the fact that it might make sense for one agency to be in charge of eggs from the moment they're laid? Apparently not.

The next example involves the retail space near the southwest corner of Sunset and Western in Los Angeles. This was formerly home to Farm Fresh, a gem of a supermarket specializing in produce. They lost their lease and word was that a new Target store would be built there, not a bad exchange since that would be very convenient for us. Except that it's been a couple of years and nothing has been done with that space. Now word has leaked out as to what the hold up is. It seems like this retail site is in some kind of special district where the city of Los Angeles has mandated that any large operator has to provide free delivery service for their customers, something which Target is unwilling to do. Why, pray tell, is such a requirement imposed? Well, to permit people who ride bicycles or take public transit to the store to be able to purchase large items! Now nobody walks in L.A., and they don't bike or take public transit either. It is commendable to try to encourage people to do so, but to stop Target from opening up because you would like to encourage alternative means of getting to the retail site is lunacy. Indeed, this ranks right up there with Los Angeles city planners who deliberately did not provide parking space along Metrorail subway stops, because they wanted people to take connecting public transit to the subway instead of driving there. Naturally, as a result people have chosen not to take connecting public transit and not use the subway. Doesn't government ever learn? (Obviously not.)
Posted by Chandavkl at 9:54 AM No comments: 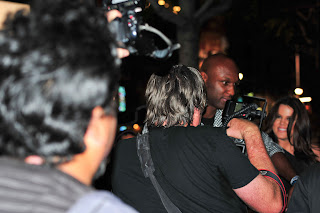 Though a native Angeleno, I had never encountered the paparazzi in their true element. I did see a bunch once while I was waiting for Mrs. Chandavkl to come out after a Leonardo DiCaprio movie premiere (the studios need volunteers to fill up the theater during the premiere showing), but the photogs were cordoned off across the street and had to use their telephoto lenses from across the street.

However, on numerous occasions while driving home, we have seen the paps camped out in front of Katsuya restaurant on Hollywood and Vine. While I'm not particularly into celebrity culture, Katsuya is just down the hill from where we live, and my son indicated that the food there is actually pretty good. So when the kids asked me where they could take me for my birthday dinner, I chose Katsuya. We arrived for dinner at 7:30, well before celebrity hour, and while the diners were trendier looking that what I'm used to, I don't know if there was anybody recognizable inside patronizing the restaurant (though even if there were I probably wouldn't recognize them anyway).

By the time we had finished dinner around 9:15 pm, things had changed outside. Eight to ten paparazzi were gathered outside the entrance to the restaurant. While we were waiting for the valet to retrieve our car we asked one of the photographers whether they were waiting for anyone in particular. He indicated that Kim Kardashian had come and gone, but that otherwise they were waiting for whatever worthwhile celebrity might show up. After our car hadn't arrived after 15 minutes we began to get really impatient. But then there was a flurry of activity. The photographers scurried to the curb, and out comes Lamar Odom of the Lakers, and his wife Khloe Kardashian. Flashbulbs pop. Paps jockey for position. Photographers and diners alike fire away. I look at Odom and he has this resigned look on his face and I first think it's terrible to live a life where there's always a camera in your face and camera flashes going off. But then I think, nah, they put themselves in the limelight and actually eat it up. A big limo then pulls up, and then our car arrives. As we drive off we see the photogs scramble to the limo and the flashes explode again. Who's in that car, we wondered.

Watching the celebrity culture at work was an interesting end to an enjoyable birthday. But in a way, the post script was just as illuminating. After viewing the episode we were wondering what the economics were that would lead one to loll outside a restaurant with a camera in hopes that some random celebrity would show up. Is there that much of a market for those kinds of pictures? So the next morning I checked the Internet to see if there was any evidence of the previous night's activities online. It turns out that Lamar and Khloe's dinner at Katsuya was all over the Internet. There were three or four separate original reports, plus dozens of others that quoted the first reports. I guess I shouldn't be surprised, but still it's a little mind-boggling that the short sequence we saw was so newsworthy. Oh, and the limo we saw as we drove off was carrying Kim Kardashian. I figured that out from a video clip on You Tube showing the limo's license plate.
Posted by Chandavkl at 3:08 PM No comments: