Though it is widely believed that there is no Chinatown in Madrid, it turns out I was fortuitously able to discover it in about 30 seconds.  Even the tour guide on our tour of Spain and Portugal, who is from Hong Kong and who did tell us a little about the Chinese living in Spain  was unaware of this Chinatown.

By way of background, this month’s tour of Portugal and Spain has been one of the most Chinese food deprived trips I’ve been on.  Basically I saw one Chinese restaurant in Lisbon on the first day of the trip, which was coincidentally right next to the hotel, then didn’t see another Chinese restaurant anywhere for over a week.  The last two days of the trip were in Barcelona, where restaurants are quite commonplace, and where two of our three group meals were at Chinese restaurants, something which I had mixed feelings about.  While I like to eat at Chinese restaurants wherever I go, and found these two restaurant visits insightful, I really didn’t get a chance to sample Barcelona’s vaunted local food.

Also, typically on our other recent trips to Europe, South America, Dubai and India, many hotel breakfast buffets offer at least a small section of food for Chinese travelers.  However not one of the six hotels we stayed at during the trip had any.  Even the Barcelona hotel didn’t have a Chinese food section in its buffet, but they did make a different accommodation for a large Chinese tour group from Shanghai–a private VIP room with specially prepared dishes.  My sister-in-law was erroneously directed into this room as the waitress mistook her for one of the Shanghai group members, and as the first member of our group to make it down to breakfast, she didn’t realize the mistake.  But while the Novotel had a special menu for this Chinese group, including some kind of Chinese vegetable dish, and all in all she said the special meal wasn’t very good.

So now my discovery.   We’re riding on Highway 42  from Toledo and approaching Madrid, perhaps twenty miles out of town.   We had ridden for miles of boring countryside so I had actually stopped looking out of the window.  But I looked up and peered out and saw what appeared to be a semi-industrial area, and noticed what looked like a Chinese shopping center, with one store with signage that said “Wenzhou”, and another one which was a Chinese bakery.  I also saw a highway billboard in Chinese.

When we got to our hotel in Madrid, I mentioned my sighting to our tour guide.    He previously had told us how that most of the Chinese in Spain were from the city of Wenzhou, famous for manufacturing knockoff designer goods.  (The only Wenzhou people in the US are found in New York, where a decade ago they controlled the fake DVD business that was booming at the time.)  Inasmuch as our guide leads this tour of Spain and Portugal probably 10 times a year for Cantonese and English speaking Chinese Americans and Canadians, I figured he had passed by this Chinese enclave many times, and would have additional information about it.  However, when I mentioned this “Chinatown” I saw, he said there was no Chinatown in Madrid and I probably just merely saw a Chinese restaurant named Wenzhou.

Not satisfied with his response, I did a Google search for “Wenzhou Madrid” which brought up Wenzhou Supermarket with two locations, one on the edge of downtown Madrid (in an area with a scattering of Chinese residents and businesses) and the other in the area which we had driven through, called Fuenlabrada.  It also pulled up a map of of Fuenlabrada which showed two other places called Wenzhou Market, and other businesses within the area with Wenzhou in their name.  Further armed with the name Fuenlabrada, I was able to get a full picture of this Chinatown.  Fuenlabrada is home to a large number of warehouses used to store various types of goods imported from China, usually representing lower priced merchandise.  There are hundreds of Chinese companies employing thousands of workers, here with Fuenlabrada being likely the largest Chinese commercial center in Europe.  The Chinese economic activity here is no secret, but little attention has been paid to the corollative development of a  Chinese residential community in the area, creating a new Chinatown for the Madrid area.

While traditional Chinatowns in the United States and worldwide were largely founded by Cantonese migrants, decades ago, who knows how many other communities like Fuenlabrada Chinatown, of recent origin founded by Chinese mainlanders, there might be around the world?  And lucky for me we drove by Fuenlabrada  and I happened to look out of the bus window at the right time.

Posted by Chandavkl at 9:09 PM No comments:

Perhaps the loudest message I've been sending the last couple of years is how Los Angeles Chinatown has been seemingly defying gravity by serving almost exclusively Cantonese style Chinese food, while every other Chinese community in the United States is home to numerous authentic non-Cantonese restaurants, particularly restaurants serving Sichuan style food. Not only that, but you can find authentic Sichuan style food in virtually every college town in the US.   So it was certainly strange to find no Sichuan style food in Los Angeles Chinatown, while you could find three or more places serving such fare in Iowa City, Iowa within short walking distance of the University of Iowa campus.


While it took longer than I thought, Sichuan food is about to arrive in Los Angeles Chinatown with the opening of another branch of Sichuan Impression, joining Howlin' Ray's Nashville Hot Chicken, Chego, Lao Tao, Baohaus, and LASA, among other non-traditional tenants in Far East Plaza (originally called the Food Center when it opened in the late 1970s as Los Angeles' answer to Hong Kong's "Food Street.")    Seemingly, Los Angeles Chinatown is poised to join the 21st century as far as Chinese food choices are concerned.

But while I have been predicting this day for quite a while now, I'm not totally ready to concede that the  Cantonese wall of Los Angeles Chinatown is going the way of the Berlin Wall.  Yes, Sichuan Impression is one of the two big Los Angeles area dogs of the modern Sichuan cuisine movement in the US, along with Chengdu Taste.  But Sichuan Impression is opening up in Far East Plaza, which is ground zero for the culinary hipsterization of Los Angeles Chinatown.  Los Angeles Chinatown has become a magnet for trendy non-Chinese restaurants, as I previously wrote for Menuism, with other non-Chinese newcomers outside of those in the Far East Plaza complex, such as Little Jewel of New Orleans, David Chang's Majordomo, Burger Lords, and the already departed Pok Pok.

With its mainstream renown, I'm wondering whether Sichuan Impression's upcoming opening in LA Chinatown is more a reflection of hipsterdom rather than an organic demand for Sichuan style food.  Perhaps the recent downtown  high rise opening of Li Orient that I previously chronicled  is an indication of organic demand for Sichuan cooking in central Los Angeles, but we will have to wait and see.
Posted by Chandavkl at 10:54 PM 1 comment:

It was big news last year when Yang’s Braised Chicken Rice, a restaurant chain with 6,000 branches in China, announced they were opening their first United States branch in Tustin., with the opening being trumpeted in the Orange County Register and the local food press.  Well, I finally was able to make my way down there, and I feel fortunate that they were still in business so I could try the place, as I can’t imagine how they have been able to survive so long. The concept itself is quirky–a one item menu (braised chicken rice, if you didn’t guess) with the only choices being variations in spice level. I could see that working for something, say, like Savoy’s Hainan Chicken, and indeed there are successful one trick ponies such as BongChu chicken in Koreatown with its glass noodle, vegetable and braised chicken dish. . But if you're going to have a one item restaurant, that dish had better be awfully good.  Unfortunately the braised chicken at Yang's Braised Chicken Rice is both too salty and too oily.

On top of that  the presentation of the dish is laughingly ugly.  The dish doesn't look at all like this picture I took, where I had to rearrange the contents to make it look appetizing. 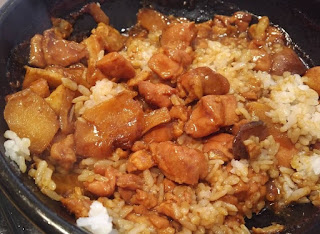 Rather, they fill the bowl with the braised chicken, then stuff a giant scoop of white rice on top, which kind of makes it look like you could only afford to eat a bowl of plain white rice, with a small amount of chicken on the side for flavoring. 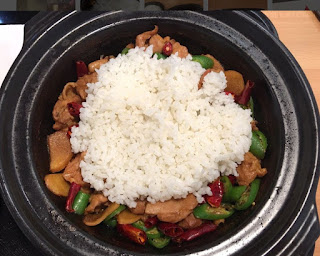 So where other restaurants now make their dishes attractive with the express purpose of encouraging people to Instagram their meal, Yang’s does the exact opposite, as nobody in their right mind would want to photograph the presentation of their dish, except perhaps on a lark.

Lastly is the cast of characters behind the counter. The lady behind the counter would easily pass for a homeless person.  And the “chef” in back isn’t Asian, either.   Clearly the concept of the people in the home office back in China is if all you serve is a single dish, formulaically prepared, you can hire anybody to man your operation.  But if your recipe isn't any good, this manner of staffing just makes the operation look that much more inept.

With Sichuan Impression and O’Shine Taiwanese cafe each just a couple of doors down on either side, I’m not sure what Yang’s owners were thinking in opening up here.  I don't know if there was a breakdown in the formula once the home office people set up shop and went back to China, or if this is just a taste that's successful in China but doesn't play well over here, a mistake that you can't make if you're only serving one dish.  Or perhaps the dish would be better if the rice wasn't soggy--the restaurant wasn't busy so the rice probably sat too long, and if the rice is soggy you'll eat less, making the dish taste saltier. But in any event this is one of the biggest head shakers I've seen in the annals of Chinese restaurants in the Los Angeles area.,
Posted by Chandavkl at 10:03 PM No comments: