Launching Pad To Becoming An Accidental Expert on Chinese Restaurants

As Charley Lanyon wrote in his South China Morning Post weekend magazine cover story on me a few months ago, the fact that I have become a frequent writer on Chinese American restaurant topics (and as such a "Z" list celebrity) was wholly accidental.  Basically for over 30 years I had been minding my own business, eating at as many different Chinese restaurants as I could, in a not particularly discriminating manner, and at some point deciding it would be a good idea to list the name and address of each Chinese restaurant I had eaten at.  While the SCMP article said I created the list to ensure that I would never visit the same Chinese restaurant twice, that's not totally correct, since if that were an absolute rule I would never have a favorite Chinese restaurant.  What the article should have said was that I didn't want to inadvertently visit the same restaurant twice, though the fact is that the list of restaurants has gotten so long that I have indeed inadvertently eaten at the same place once or twice.

At the dawning of the Internet age, the only manner in which I put all this eating experience to use was to post frequently on the Chowhound message board on various Chinese food topics starting in the late 1990s.  As I have mentioned on occasion, my Chinese food writing career had been preceded four decades earlier by a career writing on Chinese-American historical topics like the Chinese Exclusion Act and the history of the Chinese in Los Angeles, at a time when there was no real academic research on the topic, and amateur historians like myself could write and speak about these topics because there were few, if any experts in the field.  However, eventually I no longer had the time to devote to Chinese American studies, aside from reading an occasional book on the topic, plus real academics finally stepped in to fill the void.  But with the advent of the Internet, and the fascination with an exciting new toy to play with, I typed "Chinese Los Angeles" in my Webcrawler (the dominant search engine of the day) to see what new information I might find, and that's how I found Chowhound.  After posting on Chowhound for over a dozen years, writer Clarissa Wei learned of my Chinese restaurant list chronicling thousands of Chinese restaurant visits, wrote her L.A. Weekly article on me and my list, and as the SCMP and other articles have related, the rest is history.

Of course many people have gone viral for a while, never to be heard from again, sort of the Internet manifestation of Andy Warhol's comment on everybody having 15 minutes of fame.  Meanwhile I've managed to plod along regularly writing articles and fielding occasional media requests.  I attribute this continued presence to the fact that I have traveled all over the country the past 20 plus years sampling Chinese food and visiting Chinese communities, giving me a broad national view of Chinese food in the United States.  But this wasn't always the case, as for the first 20 plus years my experiences were largely limited to Los Angeles, with occasional visits to other parts of the country, certainly not enough to give me any deep perspective on Chinese food in America.

As it turns out there is a specific event that marked the divide between my eating career, an event which appeared to be devastating at the time, but which in fact was the cause of my ability to reach a higher platform.  That event was the acquisition of the smaller, almost family like CPA firm  I worked at for 22 years, Kenneth Leventhal & Company, by the international giant Ernst & Young, a firm probably more than 20 times larger and an event that was traumatic for all of us involved.  Kenneth Leventhal was a Los Angeles based firm, and all of our department, regional and national meetings and training events were held within driving distance of the Los Angeles office. 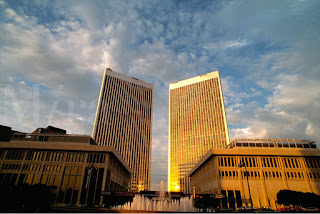 Usually the meetings were in Los Angeles or Orange County, though if we were lucky we'd occasionally get to go to San Diego or Palm Springs.  In contrast, Ernst & Young was east coast based and our meetings were held in Dallas, Florida, Atlanta, Washington DC, New York and other locations around the United States. Suddenly I was making several trips a year to other cities.  For example, before the merger I had been to New York four times.  Since then I went almost 40 more times.

Those trips to New York enabled me to explore each of the city's seven Chinatowns, and trips to places like Dallas, Miami, Washington DC, Atlanta and Phoenix made it possible for me to discover suburban Chinese communities that most visitors were unaware of.  Plus in addition to seeing the immediate area of my meeting (like the cherry blossoms in Washington DC and Rockefeller Center Christmas tree lighting night and St. Patrick's Day in Manhattan) I could easily make side trips, such as from Dallas to Oklahoma City or Shreveport; Chicago to St. Louis, Champaign/Urbana and Iowa City; or Washington DC to Baltimore and Harrisburg.  The result of this national travel enabled me to familiarize myself with just about every Chinese American community and its food, and compare and contrast the food and the communities themselves.  Clearly this gave me a perspective that would be extremely difficult for someone to duplicate.  And rolled up with my past life writing and speaking about Chinese-American historical events, this has enabled me to develop my own unique perspective.

So when Charley Lanyon referred to me as the "accidental expert" he didn't know that it was a compounding of two completely different events, over a decade and a half apart, that made me the accidental expert.