Why I Was Wrong About Gibraltar

2018 was a climatic travel year in that we visited three locales where I never dreamed I would ever visit.  Well maybe I dreamed of visiting these places, Dubai, India and Gibraltar, but I never thought it would actually happen.  Now when traveling anywhere you haven't been before, you can see pictures before your trip to get an general idea of what the destination is like, but of course there's nothing like actually being there.  However, in the case of Gibraltar, the reality turned out to be 180 degrees different from the expectation.

The reason for the gap between expectation and realization was the purchase of this computer that I am currently writing on.  It was a brand new Dell, Windows 10 computer, and Windows 10 instituted a startup screen showing landscapes or other pictures of Windows' choosing, sometimes identified, sometimes not identified, showing up for several startups and then disappearing not to be seen again.  One of the early startup picture was something that looked like the Rock of Gibraltar, with the rock teeming with crowded structures all the way down the rock.  Since Gibraltar sits across the strait from northern Morocco, this Moorish type of scene seemed logical to me.  But like I said, the startup pictures may or may not be identified, and this one was not.

So imagine my surprise when I got to Gibraltar and found not a crowded Moorish landscape, but rather a sparsely populated British looking (obviously not surprising in hindsight since Gibraltar is British) one.  And while I was still excited to be in Gibraltar, this stark difference did diminish the excitement to some extent, though I also met my goal of having a meal there, if a ham and cheese french bun at the St. Michael's Cave gift shop can be considered a meal.

As I said, the Windows 10 pictures don't repeat themselves.  Except that two years later the picture that I thought was Gibraltar did reappear, and with identification.  What I thought was Gibraltar was actually Uchisar, a town in central Turkey, built around a large rock formation that actually didn't look like the rock of Gibraltar except for this one particular view.  And now I have a sense of closure knowing where I have to go if I want to see the Gibraltar I had imagined in my mind. 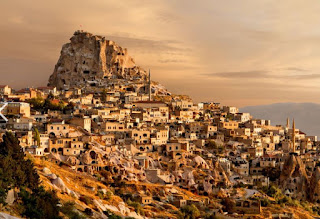 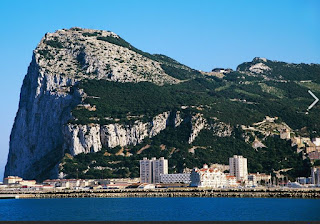 Posted by Chandavkl at 11:48 AM No comments:

I Wasn't Dreaming After All--This Restaurant Does Exist

When I first started this blog back in 2009, it wasn't a Chinese food blog, or any kind of food blog at all.  Rather I thought of it as a personal diary which I could easily access rather than fumbling around looking for some kind of paper book, never dreaming that anybody else would read anything I wrote.  As such I even posted some of my more unusual dreams on the blog.


Which leads me to write about Wok N' Tenders.  Since Howlin Ray’s became a sensation in Chinatown’s Far East Plaza, turnabout would be fair play if a Nashville Hot Wings and chicken tenders placed opened up just down the street from Gus’s World Famous Fried Chicken on Crenshaw, and also served Chinese food on the side. But then if you told me that they’re serving Peruvian Chinese food I would have told you that I’m actually asleep right now and having another of my weird dreams that I actually used to post about.

Now the Chinese influence on food in Peru is quite real.  Chinese arrived in Peru at about the same time they came to the United States for the California gold rush.  Their presence has led to a style of cuisine called "chifa," based on the Cantonese term for cooking (in our Toishanese dialect, "ji faan") which literally means to prepare rice.  Chifa is essentially Chinese food made with local Peruvian ingredients.  There is also "chaufa", which specifically refers to Peruvian fried rice, from the Cantonese word "chow faan", which means fried rice.  The term chaufa also can refer more generally  to Peruvian food cooked Chinese style.

If you look hard enough you can find restaurants in the United States that serve a wide range of Chinese-Peruvian dishes.  There are a couple here in Los Angeles, though the greatest concentration I have run into was in Orlando, Florida.  Indeed, I actually stumbled into one in Buenos Aires.  But if you walk into any straight-up Peruvian restaurant in the United States, there will most likely be something in the way of chifa or chaufa on the menu.

Still, Chinese-Peruvian food is not so common here for me to find a Nashville hot wings/Chinese Peruvian restaurant and not think that I was having a strange food dream. But in fact I’m wide awake, and Wok N’ Tenders on the corner of Crenshaw and Venice is the restaurant, just two blocks from where I attended Mt. Vernon Junior High School in the 1960s, since renamed Johnnie Cochran Middle School.  Who would have thought something like Wok N' Tenders would eventually show up there?

The Chinese menu is relatively short. There’s chicken or beef chaufa (fried rice), chicken or beef tallarin (meat with noodles), and lomo saltado (Chinese stir fry with french fries). I had the chicken tallarin and it was really great.

At this point in the cycle I only phoned in my order and quickly picked it up. Wok N’ Tender has only been open for maybe 2 months, certainly a rough time to get started. They do have free local delivery for $25 orders, and I hope to take a closer look when things settle down.
Posted by Chandavkl at 11:50 AM 1 comment: