Amazon and the Sales Tax--It's The Constitution, Stupid

Most residents of California, as well as selected other states are aware of the struggle involving Amazon.com and other online retailers over the collection of sales tax. This has resulted in a strange set of bedfellows and combatants, as businesses and consumers take different sides of the issue depending on whose ox is being gored. But despite what you might hear from the media and politicians about fairness, tax loopholes and what's right, this is first and foremost a question of constitutional law and federal power over interstate commerce.

To narrow the legal issue, instead of focusing on Amazon.com or Overstock or whomever, just say you're a California resident who likes to keep your closet clean, so you regularly dispose of clothing you no longer wear. Perhaps in the old days you gave them away to Goodwill, but more recently, you've been going on EBay and selling these items to people around the country. So let's look at that pair of shoes you sold to a buyer on Kodiak Island. Do you have to collect Alaskan sales tax on that transaction and remit it to the Alaskan government, or for that matter, pay income tax to Alaska on any profit you made? Of course not. The reason is that you're here in California and Alaska has no jurisdiction over you, and under the U.S. Constitution they cannot make you collect or pay tax. Of course, this transaction is not tax free. Alaska, like any other state, requires the buyer to remit an equivalent "use tax" on the retail purchase of goods where the seller is beyond the state's jurisdiction. But for some reason, people just aren't as diligent in paying their state use tax liability as they are in paying state income taxes. (Fortunately I make few online retail purchases, so I don't need to confront that dilemma.)

So for the same reason you don't pay taxes to Alaska, neither does Amazon.com. Now you might think that Amazon.com is bigger than you are, so they should be required to collect sales or use tax on sales to Alaskan residents where you aren't. But don't forget we are talking Constitutional principles here, and under the Constitution size doesn't matter. Under the most recent constitutional interpretation by the Supreme Court, unless a seller is physically present in a state, it is not liable to collect sales and use tax.

Of course the states know this, so how can they try to make Amazon.com collect their taxes? Well, by redefining physical presence in their state. The most common attack is the click-through referral. If a California resident is an Amazon affiliate and has a website that links to Amazon's, and if Amazon pays the Californian a fee for each click through, California says Amazon is present in California in the person of the affiliate. Now this isn't entirely far fetched, as a taxpayer may be present in a state by employing independent contractors, e.g., using a warehouse in the state owned by a third party to deliver local sales. However, using a California affiliate click through does seem to stretch the concept of presence pretty far. (California has set a minimum $500,000 sales threshold so most of you Ebay sellers are safe.) In any event, Amazon merely avoids this potential presence by getting rid of all of its California affiliates, so in the end it may be that these associates suffer the most. California also says that because an Amazon subsidiary is located in California, which is charged with Kindle research, that there is attributional presence in California. This is a more interesting approach that could possibly be upheld by a court, as are other activities which Amazon may engage in under an economic presence concept applied by a target state.

Now there are any number of ways this dilemma will play out. Amazon is trying to have California voters approve a ballot initiative to repeal the new California law. California is proposing a new version of the law that would forbid contrary ballot initiatives. Congress does have the power to pass legislation that would require the Amazons of the world to collect the tax with some minimal level of economic presence. Or the Supreme Court may or may not reinterpret the constitution to align with computer age business practices (certainly Justice Scalia wouldn't go for this) and discard the physical presence test for an economic presence test. Only time will tell who wins this Amazon battle.
Posted by Chandavkl at 10:06 AM No comments:

Stock splits may be one of the more misunderstood subjects when it comes to the stock market. Announcement of a stock split is usually hailed as good news, supposedly because it lowers the price of the stock, making it more "affordable" to future potential investors. However, most informed observers understand that this is silly, particularly when viewing the ownership of a corporation as a pie, and the shares of stock as slices of the pie. No matter if the pie is divided into ten million pieces, or after a two-for-one split, twenty million pieces, the value of the pie is the same, and the relative value of shares is unaffected by the split (or lack of split). The fact that Berkshire Hathaway doesn't split and trades for $100,000 a share belies the argument that it's bad for a stock's share price to get too high.

There is, however, one situation where a stock split does affect the total valuation of a company, and the surprising thing it's the corporation itself that seems to be oblivious to this fact. This is the case of the reverse split, where multiple shares of stock are surrendered for a single share. In the stock market there is a stigma for companies whose shares are priced too low. As such, there may be a temptation for a company to try to eliminate this stigma via a reverse split. However, in many cases the reverse split is detrimental to the shareholder of the company. The reason is that while the value of a share of stock is generally based on the allocable fractional value of the entire corporation, there is also some residual value to a share of stock as a trading vehicle. This is demonstrated by the shares of ghost companies, companies that have gone through bankruptcy, with liabilities well in excess of assets and shareholder equity clearly being wiped out. Yet shares of these companies can trade at 20, 50, or even 75 cents per share. Obviously, there is no corporate value to these shares, merely the value as a trading vehicle. In most cases this trading value is negligible compared to the corporate value, but in the case of a lower priced share of stock it could have some significance.

It is with this background that I laughed when Citibank announced a 1-for-10 reverse split to enhance its share price. At $4.50 per share, the stock price for this corporate giant was embarrassingly low, and cutting the outstanding shares by 90 percent would price the stock at a more prestigious $45. However, I knew that part of the $4.50 was the trading value, which would be lost after the reverse split. Sure enough, Citibank dropped over $1.50 per share on its first post-reverse split day of trading. And today? Citibank is trading at $30, briefly trading around $28 earlier this week. Obviously the stock would have fallen in any event. But the fact is that Citibank stock has never exceeded its opening post-reverse split price, and while they may now have the prestige of being a $30 stock, they also cost their shareholders quite a bit of money. 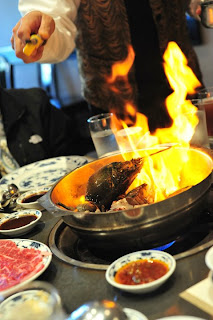 I really thought I'd would have returned to Vancouver sooner than this year, but things never fell into place. So when this year's visit was finalized I was very happy to return to the land of milk and honey. However, there was one nagging thought in the back of my mind. Chinese food in Los Angeles had clearly improved since our 2004 visit to Vancouver. Was that improvement, obviously gradual over the years, so much that Vancouver wouldn't be the knock your socks off experience that it had been the last time?

In fact there were little clues that perhaps the gap had closed. My daughter visited Vancouver last year and reported that she wasn't blown away like in 2004. However, perhaps that was attributable to the fact that she did not have the guidance from Mrs. Chandavkl's third cousin who had shown us around 2004 and knew all the best dishes at all the best Vancouver Chinese restaurants. Also, one of my foodie friends who used to visit Vancouver frequently for Chinese food (but hadn't been there recently) indicated that there was no longer the influx of Hong Kong Chinese to Vancouver, which was the event that fueled the development of Vancouver's superior Chinese cuisine. In addition in my visit last year to Toronto, which some observers indicate had caught up to Vancouver for quality of Chinese cuisine, I found Chinese food that was better than Los Angeles, but not by a wide margin. And, I had read commentary on a restaurant message board that the Chinese food in San Francisco had almost caught up to Vancouver. Given that Los Angeles Chinese food is clearly better than San Francisco, this was more evidence that the clear dominance of Vancouver was over. On the other hand, my pre-trip survey of what appeared to be the best Chinese restaurants today in Vancouver contained only one repeat from the listing from our last visit, Sun Sui Wah, so perhaps new contenders had raised the Vancouver bar higher.

Once again, Mrs. Chandavkl's third cousin took us to the best of the best and we had many outstanding meals that exceeded what we can get in Los Angeles. Most notable was our meal at Landmark Hot Pot House on Cambie St. in Vancouver, where we had a meal to remember. I always considered shabu shabu/hot pot to be "meh", but this meal was indescribably delicious. The meal started with oil being squirted on a live lobster and live crab each in its own pot, the oil being lit, and then the addition of stock to the pot after an initial cooking period. I don't know what it was--the stock, the dipping sauces, or the fresh ingredients such as fresh fish, marbled beef, thin sliced Japanese pork, bean curd sheets, oysters, clams, fish balls, etc., but it truly was a magnificent meal.

However, my conclusion is that while Vancouver is still better when it comes to Chinese food, and I'm not going to turn down future opportunities to go there and eat, but the difference between there and Los Angeles is only incremental now. Indeed, for "ordinary food," meaning most dishes that are available in both cities, while the Vancouver average is above the Los Angeles average, not every good restaurant in Vancouver is necessarily better than any good Chinese restaurant in Los Angeles.

Now where there is still a big gap is for food items in Vancouver that are not available in Los Angeles. Besides the Vancouver style hot pot we had items such as honeydew tapioca, three mushroom bean curd rolls, fried egg white balls, Cajun beef, fried bread with sweet cream, and other innovative dishes which were heavenly. And the prospect of these kinds of dishes alone continues to make Vancouver enticing. But after our last visit to Vancouver in 2004 I literally did not eat Chinese food in L.A. for a month because it would be such a letdown. However, that's certainly not the case this year.
Posted by Chandavkl at 2:10 PM No comments: