The Untold Story Behind My Profile Picture

So with the "10 Year Challenge" the current rage, I'm sitting this out since I haven't changed my profile picture lately.  While I haven't used the picture for 10 years, it's been up for a while, and I have no plans to change it in the near future.  In the years of  film photography I was a prolific photographer for decades, but for some reason in the past 20 years I've pretty much stopped taking pictures.  I will bring the camera out on a trip to a far flung place like Dubai, India or Australia, but even here I only take a fraction of a percentage of the pictures I would have taken in the past.  And yes, while I take food pictures to post on Twitter and Instagram, once posted I immediately remove  the pictures from my camera and camera roll.

Consequently when I needed a headshot when I started on social media a decade ago, I really had to scramble for an appropriate picture of me by myself, settling for a snapshot that my son had taken of me by the ocean near Ventura, when I moved him back to Los Angeles from the  Bay Area after he graduated at Stanford Law School.  That was my universal profile picture for a four year period from Facebook to Twitter to everything in between, including Linked In.  But using it on Linked In caught some flack when I was told that a picture of myself wearing a polo shirt by the Pacific Ocean was unprofessional.  So what to do?

This was right at the time that Frank Shyong wrote his Los Angeles Times Column One Front Page story about me.  That led to several follow ups by other media outlets, including ABC News which asked for pictures of me in or around Chinese restaurants.  Once again I had to scramble and my son found a shot he had taken of me outside of Seafood Village in Monterey Park, which ABC News and Yahoo News used in their story which made their daily rotating list of top current news items, and which stunned my friends and relatives who happened to click on to the ABC or Yahoo News homepages and saw me staring right back at them.  (One friend was spooked because she never went to the ABC  News site and the one time she just happened to go there, there I was.) 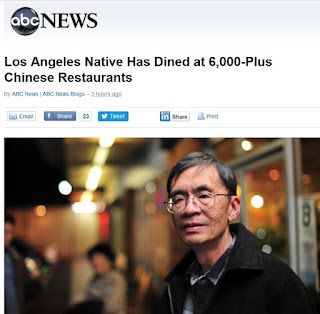 Then I was contacted by Channel 7's Sunrise television show in Sydney, self-proclaimed as the highest rated breakfast TV show in Australia, who wanted to do an interview with me.  No, they weren't going to fly me to Australia to the interview.  Rather they wanted me to go to their studio in a Century City office skyscraper (who knew?) to do a remote live interview with hosts Samantha Armytage and Andrew O'Keefe who were in Sydney.  They even provided me an advance list of questions they might ask, a far cry from any of the live interviews I had previously done.

Due to the time differential, my interview was between 4pm and 5pm in Century City for their early morning next day broadcast.  I was ushered into a windowless and dark interior room, seated under bright lights in front of a blank screen, with a TV monitor in front of me.  I was told to smile and look straight into the TV camera.  The show was on commercial break but because I was on a live audio feed with Sydney I was told I would hear the hosts conversing off the air, and that I needed to be aware when the telecast resumed.  While the show was still on commercial break, I noticed that I could not avoid looking at the TV monitor, so I told the technician to turn it off.  When the show resumed we had a nice interview lasting several minutes, and while surprised they asked me some questions that were not on their advance listing, I was able to handle the surprise questions well enough since all my prior interviews had been unscripted.  When the interview ended, one of the technicians said that if I could wait a few minutes he'd give me a DVD of the broadcast.  I had thought that I might not ever see the broadcast, so I was very happy to get a copy on the spot.  (Ultimately the show was uploaded to YouTube, so I would have seen it anyway.  Subsequently it was taken down from YouTube, but you can see it here on my Dailymotion page.)

When I got home, I popped the DVD in my computer and was utterly surprised to see that I was interviewed with the skyline of Los Angeles in the background, as seen from Mount Hollywood.  As I mentioned, I was actually interviewed in front of a blank screen, but it was a "green screen" which enabled other images to be remotely imposed on it.  The irony is that the view of downtown from Mount Hollywood is the same view I have from my house roughly a mile away,  except that I'm at a slightly lower elevation.  Indeed, people I know could have well presumed that I was being interviewed at home!

As I watched the interview I wondered if I could get a screen capture of the video that would be good enough for me to use a profile picture.  Experimenting with the Windows Snipping Tool, I discovered that it was possible to grab a screen capture from video being played on the computer, so I took several "shots" this way, with the best one looking like this.

So now this is my standard profile picture.   Sometimes the picture gets distorted due to the oblong shape, as is the case here on Chandavkl's blog.  However for the most part the picture comes out fine, and it's hard to see me replacing this picture, given the way that it came about.

How Being A Z-List Celebrity Has Changed My Life

Six years after having been "discovered" by Clarissa Wei as having eaten at over 6,000 Chinese restaurants (now over 7300), I asked myself whether my life has really changed or not.  The answer probably lies in the fact that I even have to ask this question, which means it really hasn't.  It's like Lorne Green sang in his only hit record as a singer, I'm the same old me you used to know, just a little bit older.  But upon further reflection, while things haven't changed, in some ways they have, just in an evolutionary, rather than a revolutionary manner.

When I say things haven't changed, I'm still continuing my quest to eat at new Chinese restaurants.  It's not like people recognize me while I walk into restaurants or walk down the street.  While it's happened a few times, which certainly is something different, it doesn't happen often enough to say it has changed my life, though apparently some people think otherwise as I have been told a couple of times by people who said they had seen me in a public location but didn't want to bother me. But the fact is that while people may be aware there's a guy out there who has eaten at over 7,000 Chinese restaurants, attaching a name and a face should they encounter me is a very low probability proposition.  One slight change though is that I may order a little differently, keeping in mind what people might ask me about with regard to the particular restaurant.  Also the occasional interview and speaking requests I get are clearly fun and very interesting.

But on the other hand there are some definite changes.  Where I used to proudly proclaim I didn't photograph my meals because I'm not a foodie, I now photograph them all.  Not because I've turned into a foodie, but because people were complaining on Twitter that I would talk about meals without providing photographs.  So now I post pictures of my food on Instagram and Twitter, then promptly delete them from my camera and photostreams.

Perhaps the most immediate change which occurred from the very beginning was that I Google myself (under various search terms) at least once a day to see what there is out there about me.  I have found that even if I've done a formal interview with a writer they often don't tell me when their work has actually posted, so at a minimum it's nice to know when something is in circulation.  Then there is the commentary on items either written by or about me.  And there are also times when third parties may mention me, or on a few occasions written an article about me without my knowledge.

Probably the most significant change is continuing to provide content for my Twitter account (almost 1,200 followers) and Instagram (over 500).  I remember a few years ago hearing comments that people on social media feel the pressure of having to continuously post new material for their followers.  I don't think I really understood that point when I heard it, but I understand it now that I've retired in recent months and correspondingly found myself at home and not leaving the house a lot more often than before.

Another change is writing on Chinese American restaurant topics on a regular basis, mostly for the Menuism blog, where I average one article a month.  When I first started writing for Menuism in 2012, I rejected their suggestion to be a regular contributor since I could not envision finding enough Chinese restaurant topics to do anything like that on a regular basis.  Six years later I'm up to over 70 completed articles for Menuism, and while there are periods when I struggle to think of new topics to write about, I do manage keep going.   2017 was a difficult year in that I also wrote a dozen articles for L.A. Weekly, prior to its sale and disappearance as a force in Los Angeles food journalism.  The only way I managed to deal with that added workload was to venture into quasi-restaurant reviews, which I never did before, and which in hindsight I found to be a bit boring.  However, after the demise of L.A. Weekly, I did continue to do similar articles for this Chandavkl blog, so at least I have more regular content for the Chandavkl blog which had consisted of odds and ends and had to struggle to come up with just one posting a month.

I think the remarkable thing is that I have had more than one bout of 15 seconds of fame.  The first bout with Clarissa Wei's L.A. Weekly article which spread to the Huffington Post, People.com, and then viral around the world was a bolt out of the blue for highlighting something that I had been doing in my everyday life for decades.  Then there was another 15 seconds of fame with Frank Shyong's 2013 front page profile, which had a greater impact than Clarissa's article in that the Twitter count shot way up, most likely due to the ABC News/Good Morning America/Yahoo news follow up article. Then came the Search For General Tso movie for the third 15 seconds. This episode was a little different because it was a little more personal.  For a documentary movie that played a few, mostly minor film festivals, with a limited theatrical run which made its way into only one theater multiplex that I know of (in Phoenix), followed by streaming on video services, I was surprised how many people I or my family knew were told by friends and acquaintances that they had seen the General Tso movie and were stunned when I showed up onscreen.  And now, it seems there have been at least another 7 1/2 seconds more of fame resulting with the South China Morning Post Magazine cover feature on me, which while it did not have much of a secondary media impact, appears to be the cause of a 50 percent increase in Instagram followers.