When I was a kid, the only Chinese bbq pork buns in circulation were the steamed ones, much larger in size than the current buns served in orders of three buns, and referred to back then as "hom bao".  Then somewhere along the line somebody invented the baked bbq pork bun, baked to a golden brown on top with a smooth top having a sweet glaze.  I'm guessing these arrived first in Hong Kong, maybe in the 1980s, though frankly I can't tell you where I first encountered this item in the United States.

But the real gem in this collection is what might be referred to as the crunchy top bbq pork bun.  It's most associated with Tim Ho Wan in Hong Kong, the world's most inexpensive Michelin starred restaurant and seems to have been replicated only by a handful of Chinese restaurants in the United States, most notably Hong Kong Lounge and Lai Hong Lounge in San Francisco. (Strangely, a small bakery in San Francisco Chinatown, AA Bakery on Stockton St., produced them for a while, but seems to have stopped.)  Also, Sea Harbour in Rosemead, CA has a similar item they call a French top bbq pork bun.  The Tim Ho Wan version is the best, but the Lai Hong Lounge version is a good substitute.  Indeed so good, we once ordered four orders of three buns at Lai Hong Lounge, one to eat at the restaurant and the others to take back to Los Angeles.

But the problem with taking these things home is that a dim sum item that starts off with a crunchy top soon turns into a soggy and soft bun that doesn't taste so good.  Microwaving one of these cold buns only makes it hot--it's still soggy.  However after experimenting I figured out how to revive these things at home.  A double passing through a toaster oven cycle gets the top nice and crunchy again.  Unfortunately, that's not enough to warm up the inside fully, and more time in the toaster oven will burn the top.  But after the double toaster oven treatment, 20 to 25 seconds in the microwave, and voila!

Note that this treatment also works to revive pineapple top bbq pork and chicken buns, too. 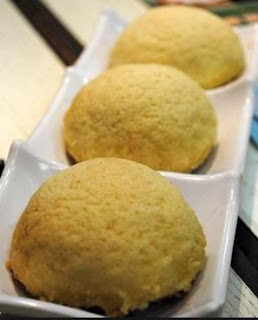 Posted by Chandavkl at 2:43 PM No comments: