USC fans are going crazy over the NCAA refusing to reverse its prior decision to impose a two year bowl ban and a loss of 30 football scholarships over three years. However, there seems to be a bit of misdirection in their rage. As much of their ire is directed at Pat Haden, recently appointed Athletic Director, as at the NCAA. Indeed, Haden is being portrayed as a traitor and even a tool of Notre Dame, the school for which he was football telecast color commentator. The thinking is that Haden's strategy of co-operation with the NCAA during the appeal process, as opposed to the arrogant opposition shown by the prior athletic administration was completely inappropriate.

What these fans fail to recognize is that stonewalling the NCAA at the investigation stage is what made the NCAA penalties so severe in the first place. As reformed USC honk Petros Papadakis points out, this is why Ohio State and Auburn have self-reported potentially major violations and is what distinguishes those cases from USC. All Haden was doing was trying to undo the damage done by his predecessor athletic director, Mike Garrett. Garrett was a person so devoid of interpersonal skills that one highly placed USC source once said to me out of the blue, in a conversation that had nothing to do with USC or sports, that USC athletic director was an "a**hole". There is an irony in that USC fans themselves have been highly critical over the years of Mike Garrett's tenure as atheltic director, and now they are suffering from his actions to boot.

It is also ludicrous to think of Haden as a traitor to USC by virtue of his working on telecasts of Notre Dame football. Sports announcing, just like coaching, is just a job, and one where there are a limited number of openings. So if you're a USC diehard, but you get an opportunity to broadcast Notre Dame games, do you turn it down? I doubt it. And how many SC gripers heard Haden's answer to the hypothetical question to what he would do if he received a multi-million dollar windfall? He said he would give a good portion of it to his alma mater.

The other thing is that a large majority of USC fans want to sue the NCAA, perhaps even a class action suit by the fans, since the school has stated it will not sue. But what would be the grounds for a suit? You can't sue a voluntary membership organization like the NCAA merely for not playing fair with you. The NCAA is not a government organization. There is no racial or other impermissible discrimination charged. I would think any cause of action would arise out of contract law, and USC's team of lawyers have undoubtedly checked out every angle.
Posted by Chandavkl at 5:45 PM No comments:

The U.S. Supreme Court just upheld lower court rulings that California prisons are impermissibly overcrowded. This leaves California with a difficult choice--spend billions of dollars it doesn't have to expand facilities or release thousands of dangerous criminals onto the streets. So why is this good news for California? Because it may well eliminate billions of dollars in unnecessary government spending and reduce the influence of one of the more nefarious political interest groups in California.

In California, the prison guards' union is one of the formidable and influential players in California politics. California prison guards earn six figure salaries, have fat pensions, and are perhaps the single most powerful special interest group on the political scene. Political candidates backed by the union have an almost 100 percent certainty of being elected, and politicians of all stripes vie for the favor of the prison guards. Now being a prison guard is one of the worst jobs imaginable, and you couldn't pay me enough to take that job for even one day. On the other hand, you don't see prison guards making this kind of money and having this kind of influence in other states.

So how did we get where we are? The answer is that California keeps more people in jail than the other states. The prison population is artificially swelled by a number of factors. The three strikes law, can send a felon to prison for a mandatory 25 year sentence for something like stealing a pizza. California parolees are returned at a rate much higher than other states because very minor violations are cause for being sent back to prison. With this bulging prison population there is a bigger demand for prison guards, which gives them that much more influence.

The wasteful spending caused by this overincarceration is legendary. California prisoners are entitled to medical care, including expensive procedures such as heart transplants, that many of us would be jealous to have, though day to day health care may fall short. A recent Los Angeles Times story details how critically ill prisoners are tended to at off prison sites, under round the clock guard by two or three prison guards, at the cost of $800,000 per prisoner per year. Such critically ill prisoners could easily be released into the civilian health system without danger to society, but since this would result in the elimination of cushy prison guard jobs, it hasn't been done, with the cry of "public safety" being used as a shield to justify this waste.

But wouldn't the wholesale release of thousands of prisoners in fact be a threat to public safety. Of course it will, though it can be mitigated by releasing those who pose a lesser danger. But the fact is that public safety is not something that has to be maximized to the exclusion of everything else. As my criminal law professor said, if you threw everybody in jail the streets would be completely safe. So really, public safety is a balancing factor. And with proportionately more people in California prisons than in other states, is California a noticeably safer place to be? I don't think so.
Posted by Chandavkl at 10:55 AM No comments:

The Interesting and Intriguing Saga of Little Sheep Restaurant

At first glance, the Little Sheep Mongolian Hot Pot restaurant which opened up a few months ago on Azusa Ave. in Hacienda Heights is just one of a few hundred authentic Chinese restaurants in the San Gabriel Valley. Yes, Mongolian Hot Pots are not as common as Hong Kong style cafes, but in the past decade there's been a healthy choice of restaurants of this genre that diners could patronize. But few restaurants have the intriguing past, as well the interesting future, associated with Little Sheep.

Little Sheep first came to my attention in 2003, when suddenly Dragon Regency Restaurant, a stalwart of Hong Kong style food for roughly two decades, was replaced by a new restaurant whose interior decor was a gigantic mural of the Chinese countryside with sheep roaming all over the landscape. This brand new Little Sheep restaurant, which introduced the Mongolian style hot pot to Los Angeles, was allegedly a branch of a famous restaurant chain in China. It proved to be a big hit, so much so that additional branches opened up in San Gabriel and on Azusa Ave. in Hacienda Heights.

Moving forward to 2007, a couple of interesting things happened. First, a poster on one of the Chowhound message boards noted that the main Little Sheep website in China did not mention any Los Angeles area branches, even though they did have a listing of their branches in North America. Subsequently, the Little Sheep locations in Monterey Park and San Gabriel both changed their names--the Monterey Park restaurant changed first to Little Fat Sheep and then Hot Pot! Hot Pot!, while San Gabriel became Sheep Young Young. The Hacienda Heights location closed down altogether. As it turns out, we had been punked. These were not really branches of the Chinese chain, but clever imposters.

Now this isn't the only time that locals have purportedly opened branches of famous Chinese restaurant chains. The Hui Lau Shan dessert restaurants in San Gabriel and New York not only stole the menu from the real chain, but they replicated the furniture from the real stores. A fake 85°C Tea House operated in San Gabriel until the real Chinese chain opened up in Irvine, and a fake Din Tai Fung has successfully operated in Toronto for many years. However, Little Sheep was an elaborate deception, which even fooled restaurant critics who routinely described the ersatz restaurants as being part of the Chinese chain.

But all that is in the past and now there is a real Little Sheep in Hacienda Heights, in the same shopping center but not the same exact space as the imposter from several years ago. But in the future, will there now be a Little Sheep on every corner? I just read in the New York Times that Little Sheep is going to be acquired by Yum Brands, parent company of Kentucky Fried Chicken, Taco Bell and Pizza Hut. Now this isn't totally off the wall, as the Little Sheep chain is hundreds strong in China. But as you know, besides independent freestanding locations, Yum Brands also operates mini-food courts having a KFC, Taco Bell and Pizza Hut sharing space with each other. Do you think we'll be seeing Little Sheep Mongolian Hot Pot operations being added to these courts?
Posted by Chandavkl at 9:21 AM No comments: 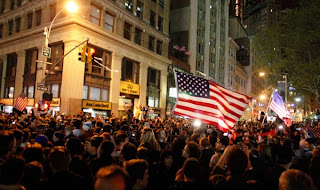 At times I actually felt sorry for Osama Bin Laden. Poor guy was constantly on the run in the mountains of Afghanistan and Pakistan, never staying in the same place two days in a row lest the hounds catch up to him. What a life! However, as things turned out, it was more like the situation jokingly suggested by one wag that maybe Obama had gotten a shave and was living somewhere in the U.S. Finding him in an urban villa is certainly closer to that scenario than life on the run in the wilds. Of course, now the question is what did the Pakistani government know and when did they know it? While there is tremendous suspicion in that regard, I'm guessing they really didn't know either. With the $25 million bounty on UBL's head, if his true whereabouts were known to government officials, I gotta think somebody would have turned him in for the reward.
Posted by Chandavkl at 10:06 AM No comments: