I've had a very strange relationship with the city of Phoenix (or as the stewardess on a recent flight I took from LAX to Phoenix repeatedly pronounced it, Fennix.)  It's only 400 miles from my home in Los Angeles, meaning a short one hour flight or an eight hour drive.  Yet after first visiting Phoenix in 1966 while still in college, my next trip there wasn't until 2004.  And since then I've been there 10 times, so I'm now fairly familiar with their Chinese food scene as reflected in my Menuism article on Chinese food there.

Recently, a newly opened (well actually, new ownership of an old restaurant) called House of Egg Roll (sic) in suburban Chandler has made such a splash that it made one publication’s list of the top 50 Chinese restaurants in the U.S.  My guess is that the current owner purchased the predecessor Americanized Chinese restaurant and didn’t bother changing the English language name, since it’s irrelevant to Chinese speaking clientele.  So as soon as I picked up my rental car at Sky Harbor Airport on Sunday morning, I made a bee line to Chandler.   House of Egg Roll is now a Shaanxi style restaurant  and their pita bread lamb soup was the best I’ve had.  It was better than Shaanxi Gourmet in Rosemead in the San Gabriel Valley,  the best of several Shaanxi style restaurants in the SGV, which is saying a lot.  Before heading to the Hyatt Regency Scottsdale at Gainey Ranch, I also picked up a nice order of pork bing from Chengdu Delight to eat in my hotel room.  Just as good as in Los Angeles. 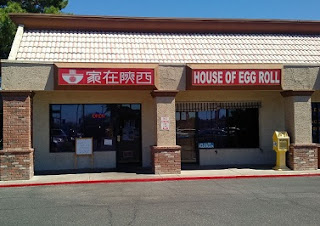 Shortly after I arrived in Scottsdale, I received a message from my friend and former co-worker Dave Isaac.  Somehow, Dave had parlayed his CPA practice with a secondary career as a radio talk show host.  Indeed, Dave once had me on his radio show to talk about Chinese food and our working days together..  Since my hotel was in Scottsdale and Dave lives in Peoria, we couldn't meet in the Chandler/Mesa area where most of the good Chinese restaurants in the Phoenix area are located. Fortunately, while I was in Chandler I was able to pick up Chinese newspapers with restaurant advertisers and I found some new restaurants that I hadn't tried, and luckily there was one new advertiser in north Phoenix,  Ann’s Asian Bistro, in the city of Surprise, some 30 miles west of the Hyatt Regency in Scottsdale.  I had driven through Surprise once, eight years ago when I last drove from LA to Phoenix, and considered Surprise to be at the edge of nowhere.  It was even west of Sun City, America’s first retirement community which I actually remember opening up around 1960.  Nowadays the western part of Phoenix flows seamlessly into Sun City, and now Surprise, so it met Dave the next night for dinner.  Ann’s is one of the few new Cantonese restaurants in Phoenix, as with most Chinese communities in the US, the bulk of the new Chinese restaurants are non-Cantonese.  At Ann's we ordered the beef chow fun, garlic string beans, and salted fish tofu casserole, all of which were reasonably good, particularly the salted fish casserole.  And we practically had the entire restaurant to ourselves as there was only one other diner there the whole evening.

After my meeting ended late Tuesday morning, I headed down to Mesa to try some other new restaurants that I saw in the Chinese newspaper.   First stop was B J Noodles, where I was expecting to have some dumplings or perhaps noodle soup.  But then I saw something on the menu described as “grains fish”.  I asked what that was, but the waitress was unable to explain it.  Since it wasn’t marked spicy I decided to try it.  That was a good choice because it was an absolutely delicious dish of sliced fish in a white sauce with sauteed sliced cucumbers and wood ear fungus.   I wolfed it down in record time.  In the same shopping center was another new find, Chili Rush.  Needing more food for later in the afternoon until my evening flight home, I searched for nonspicy, nonmessy dishes and came up with the national dish of Taiwan, stinky tofu.  Interestingly the restaurant's menu didn’t say Chili Rush, but rather Magic Chili Garden instead.  As a Google search later revealed, the ownership entity is Magic Chili Garden, but they operate under the name Chili Rush.  And strangely, the receipt for my food had neither name, but rather said Henry’s Private Kitchen. Last stop was Nan Zhou Hand Drawn Noodle House for some extra thick hand made noodles in peanut and garlic sauce.