Freedom From The Office Workplace Routine

When my company announced a little over a year ago that they were planning a complete office remodel involving the gutting of the entire space I became rather distressed. After all I remember the horror we went through five years previously when our Century City office where I had been resident for almost 30 years was being closed, and all of us where shipped in little boxes to new quarters in downtown Los Angeles. Furthermore, the company was doing the renovation in stages, so no new temporary space was rented. Rather we would double up in the remaining space as other parts were being renovated, meaning a series of temporary moves before landing in our permanent space.

In my case the beginning of the renovation was particularly bad as I was assigned to what I describe as a broom closet, in the interior of the office such that I could not tell whether it was light or dark outside. Furthermore, even though the magic of scanning had greatly reduced my storage requirements from the move five years previous, there still wasn't enough room in the broom closet for all my materials, let along any room for me. (It's hard to believe that even after the move, these "broom closets" are actually double occupancy offices, apparently on the premise that both occupants would never be there simultaneously.)

In the end, however, as desperate circumstances lead to desperate measures, desperate measures may pave the way to a better world that may not have been imaginable. My response was to minimize the time spent in my new quarters. Working at home on a full time basis was not an option, as in my thinking, a day spent without leaving the house is a wasted day. Working at home an hour here or an hour there is OK, but home is not a place conducive to productive work on a regular basis, and staying home all day drives me crazy.

Fortunately a year before the company had rented hotelling space in the Century City twin towers, in the mistaken belief that the space would be widely utilized. Indeed, while that had not proven to be the case largely due to the cost of parking in the area, I was still expecting a lot of competition for the Century City space during the renovation period. As things turned out, the parking situation ($32 a day to park in the building, $11 in a nearby surface lots) continued to scare away users. But that was no problem for me, since due to a combination of street parking in Beverly Hills, which was closer than everybody imagines, and use of Century City mall parking, I was able to utilize the Century City office for three days a week during the renovation period. It was then that I noticed that nobody cared whether I was working in Century City or Downtown, as for the past several years almost all of my work was arriving by email. Suddenly I discovered that I could take Mrs. Chandavkl to Las Vegas during her spring break while I set up my "office" in the Luxor Hotel. Or take a long weekend to San Francisco or even Toronto, without telling anybody, since I could monitor my work situation from out of town as well as from in town.

Once concerned about getting into the office too late or leaving too early, I now find I can work a little in the morning at home and arrive in the office later, or leave the office early and finish up at home later. I can work in Century City or I can work downtown, depending upon where I want to eat lunch. It's all up to me.
Posted by Chandavkl at 9:06 AM No comments:

Winning Ugly Is Better Than Not Winning At All 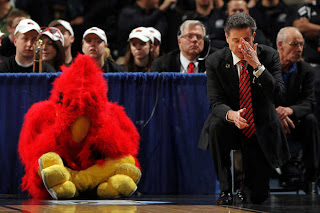 Last night's 78-76 win by UCLA over Michigan State was one of the ugliest wins in UCLA basketball history, and particularly as far as NCAA tournament wins go. Up 23 points with 8 minutes to go, even with my pessimistic penchant I had mentally tallied this one up in the win column. However, over the last 8 minutes, Michigan State whittled down the lead to one point and had an opportunity for a game winning shot. Supposedly after the game the Bruin message boards were reacting as if UCLA had lost the game, and even I had no interest in watching the game over again. Yet, the fact is that an ugly win is infinitely better than any kind of loss (see Rick Pitino and the Cardinal Mascot after Louisville's shocking loss to Morehead State).

In hindsight today's game points out the value of other similar ugly wins by UCLA early this year, where the team built up a large lead and then held on for dear life as an inferior team surged at the end to almost, but not quite catch up to the Bruins. At the time these were viewed as ugly wins, having no redeeming value except for the "W" itself, with the ultimate victory attributable to end of game luck or poor play by the opponent. But seeing how yesterday's game was just one of several similar episodes, those earlier wins were probably valuable in enabling the team to have the fortitude to hang on in the end, rather than collapsing, which was entirely possible. Or looking at it another way, winning ugly could be a positive characteristic showing a team's ability to win, a measurement separate and apart from physical talent.
Posted by Chandavkl at 10:05 AM No comments: 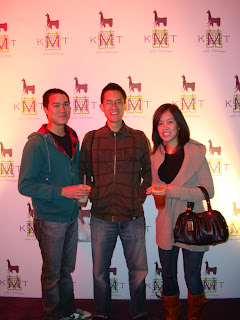 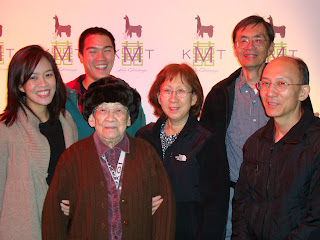 We often go to dinner on Saturday evenings at J.R. Bistro in Chunsan Plaza in Chinatown. But last night something distinctively different was going on. As we drove into the parking lot, there was a huge line of people waiting to get into Ocean Seafood restaurant, the banquet sized restaurant on the second floor. Never had I seen such a long line outside of a banquet hall, as guests arriving at a Chinese wedding banquet typically straggle in over an extended (actually, very extended) period of time. Then, after we parked we saw a large bus roll in and deposit another group of people at the end of the line. That sort of explained things--parking was off site so people were arriving at the restaurant in large groups.

However, it wasn't until after we finished dinner that we realized what really was going on. The people were lining up for red carpet shots in front of a backdrop designed especially for the event. By the time we got out everybody was inside the restaurant, but the screen was still standing outside the restaurant. So we decided to take our own red carpet shots.
Posted by Chandavkl at 5:12 PM No comments: