A Week of Dining in San Diego and New York

Last month's trip from LA to San Diego to New York produced a number of dining highlights.  Actually San Diego was mostly onsite hotel meals, with only one restaurant visit.  Del Mar Rendezvous, is a Chinese restaurant I would never had heard of except for the fact that Clarissa Wei had included it in the handful of California Chinese restaurants in her article on the 50 best Chinese restaurants in the US that she had written for CNN.   In reading Yelp their signature dish seemed to be the marinated duck breast, so we ordered that plus the Singapore mei fun.  Because the duck required preparation time, the mei fun came out first and was clearly the worst version of that dish we ever ate, moist and bland.   The $26 duck on a bed of string beans came out later, and it was OK, but certainly no better than the roast duck you could get in Chinatown or the San Gabriel Valley for much less.  Strangely the tweet I posted saying that this was the worse mei fun I had ever eaten was retweeted by a San Diego magazine and another San Diego tweeter with a large social media presence–between them the two tweeters had 10,000 followers.  I wonder whether they realized that my tweet was so negative.  I also wonder why Del Mar Rendezvous made CNN's national Top 50.

We took an afternoon flight out of San Diego for New York, and by the time we got our luggage and rode the taxi into town it was 11 pm, so I was still debating whether to eat.  However since the Halal Guys were just a block away from the Sheraton we headed there and luckily the line was short.  The chicken rice was as good as ever. 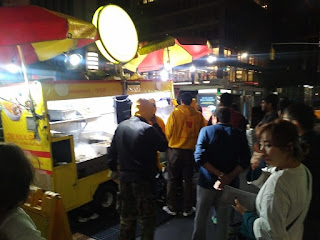 For me, the highlight of the trip was the next morning at Tim Ho Wan in East Village.  Tim Ho Wan invented the crispy baked bbq pork bun, and the bun helped their Hong Kong location become the first restaurant in the $10pp category to garner a Michelin star.  When they first opened in New York about a year ago, the waiting time was as much as 3 to 4 hours, so I decided to get there early, at 10:30 am.  I was relieved to find that it was only half full when I arrived there.  I presume that by now that novelty has worn out, plus the fact that aside from the crispy bbq pork bun, the word has gotten out that the rest of the stuff on the menu isn’t particularly good.  I had two orders of the crispy buns which while not as good as the Hong Kong branch, or even versions of the same item in the Bay Area, were still good enough to make me happy. 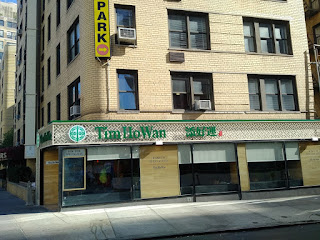 Next most notable meal was dinner at Hakkasan.   The NY Hakkasan menu was largely different from the San Francisco branch, and we had the lamb wrap (similar to the now ubiquitous Shandong beef rolls), seabass with Chinese honey (the best dish of the night), and the curry seafood hotpot with fried bread, plus a bowl of chicken soup.  In addition, because they misplaced our order for a while, they comped us their special passionfruit dessert, which was a dab of passionfruit sorbet, a small chocolate square with passionfruit in the center, and a small passionfruit gel.  The $15 retail price for the dessert made for a $150 dinner in total, which while quite good, really wasn’t worth that hefty of a price. 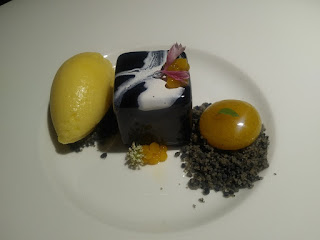 A nice side trip was a subway ride to Columbia University to check out the Chinese food trucks I had written about.  The ride was short from Midtown, and it took a few minutes more to figure out that the trucks were parked near the main gate.  There were a half dozen trucks parked, four Chinese though the others were also Asian.  I  spotted the Uncle Luoyang trick and had the tofu skin salad which was quite good, eating it while looking out over the main courtyard. 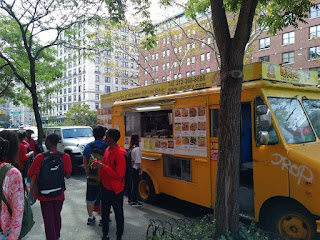 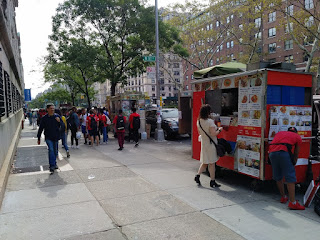 Another nice trip was going out to Flushing where  we went to New Mulan Seafood restaurant as it was the only major dim sum location in Flushing I had never been to.  The bad news was that it was full up with people waiting for dim sum, but the offsetting news was they had a separate dining room that did not serve dim sum, which was largely empty and was good enough for me.  It was actually one of the nicest dining rooms I’ve seen in a Cantonese restaurant in a Chinese community.  The regular menu had a high price point, but they also had a nice menu of $10 lunch specials.  The best dish was the throwback Cantonese fillet steak, almost never seen in California before where everybody serves the better tasting French cut filet mignon instead.  Another sign of how New York Chinese food badly trails the west coast. 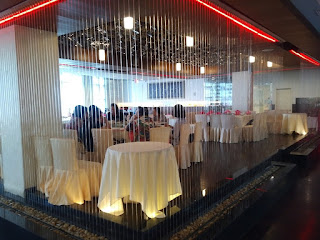 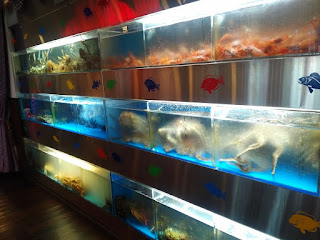 The rest of the food in New York was good to average.  It was interesting going to the original Eataly in Chelsea after having visited the Chicago Eataly twice.  The pappardelle with black truffle cream was excellent, but the lasagna wasn't, as the noodles were much too thin.  Chinatown dinners at Canton Lounge and Shanghai Heping were ordinary, as was breakfast at Hoy Wong.   However, the fish jian bing at Yinwahmen, the first I’ve ever seen, was very interesting, basically like a McDonald’s filet of fish but spicy with pickled vegetables.   And Kam Hing Coffee Shop turned out to be a real gem, the only restaurant on Baxter St., a street I passed dozens of times but never bothered to check out since their signature item being sponge cake wasn't that much of an attraction to me.  Kam Hing has one of the shortest menus I’ve ever seen in a Chinese restaurant.  But in addition to the sponge cake, they have fish balls, and rice noodle logs, and they do a booming business both with sit downs and take outs. 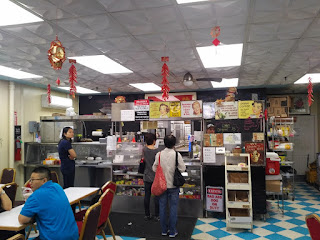 Last mention goes to the Lexington Ave. street fair, one of the rotating street fair locations put on by a company called Mardi Gras Productions, which ran over a dozen blocks.   Several food vendors sold arapas, a Colombian cornmeal patty made with mozzarella cheese.   Very interesting and I thought also very good. 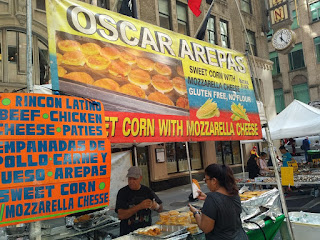