Barely two years ago I had written about the exciting new trend of Mainland China based restaurants setting up shop in the Los Angeles area.   However Mainland Chinese branch restaurant openings in the LA area have since become so commonplace that it's no longer newsworthy if that Chinese restaurant that just opened up in Rowland Heights happened to be headquartered in China.  However this wave of Mainland Chinese restaurant openings was confined to operators headquartered in places like Beijing or Chengdu, representing regional cuisines often referred to in the past as "Northern" Chinese cuisine.


With this background, the recent opening of Ooak Kitchen, a Guangdong based Cantonese vegetarian restaurant chain, with nearly 50 branches is rather noteworthy.  Guangdong is a hotbed of Cantonese dining, but with Cantonese cuisine on a relative decline here in the United States, we haven't seen any recent openings here in Los Angeles of Guandong based restaurant chains, though H L Peninsula did open up earlier this year in South San Francisco.

Obviously, the first question is why Culver City and not the San Gabriel Valley?  Not that a Westside beachhead was entirely unprecedented, with Meizhou Dongpo making their debut in Century City, though they may have had more mainstream designs when they opened.  Indeed the question of why Culver City become more obvious when looking at specific items on the menu.  For example their signature dish appears to be their vegan duck, something quite familiar to people who consume vegetarian duck/goose in the San Gabriel Valley, but certainly not to Culver City locals.

Or how about vegetarian shaking beef, carved marvelously out of a giant black mushroom imported from China? Shaking beef? For the Westside crowd wouldn’t broccoli beef be something more familiar?

After the dinner I sought out the manager and asked about the choice of location.  He felt that the Westside was  more appropriate on several counts.  For example the vegetarian shaking beef was carved out of a single gigantic mushroom, imported from China like many of his ingredients.  He implied that with the competitive pressures in the San Gabriel Valley he wouldn't be able to prepare his dishes the way he wanted, presumably because he couldn't charge enough.  He indicated that a second location had already opened up in Buena Park, with other branches planned soon for Santa Monica and  Malibu, which seemed to indicate there were more of their targeted diners (freespending vegetarians?) in these communities.

It'll be interesting to see if Ooak is able to find traction, particularly on this side of town. 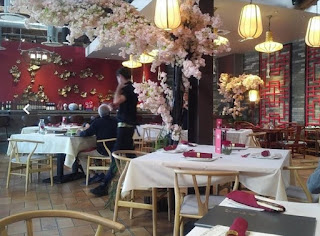