Yesterday was an exciting day for us at the Los Angeles Coliseum as UCLA drubbed crosstown rival USC by the unprecedented score of 62-33.  Even though both teams were mediocre this year, for Bruin fans any victory over the Trojans is a treasure.  I have been to around 50 of these games, including the past 45 UCLA-USC games, except of course for last year's fanless game.  Overall, I'm a little under .500 in these games, so there have been both many happy and unhappy moments since my first in-person attendance in the early 1960s.

For most UCLA fans, going to the Coliseum to play USC every other year is not a desirable thing, since the neighborhood is unfamiliar to most of them, so they don't bother to attend.  That hasn't been a problem for me since I attended dozens of UCLA football games in the years where the Coliseum also served as UCLA's home stadium.  In addition for many years I lived only 15 minutes away from the Coliseum so getting there was convenient.

However particularly after moving further away from the Coliseum, getting to the Coliseum on Big Game day became problematical due both to traffic and parking issues.  In my younger years I was willing to put up with it, but I became less tolerant with the hassle.  It did help that Metro Line construction did provide an alternate method to get to the game, though still troublesome, which allowed me to continue my streak of attendance at UCLA-USC games.  But with the COVID 2020 season where fans were not allowed at any of the games, breaking my attendance streak, I felt no compulsion to attend yesterday's game.  I had no intention of attending yesterday's game until my son said last week that he wanted to take my grandson to his first football game.   So Mrs. Chandavkl and I decided to tag along and make it a family outing.  And obviously it was well worth it with such a big and satisfying victory.

But there was one sour moment for me before the game started.  In attending all of the UCLA home games at the Rose Bowl this year, while a smartphone ticket was the default option, there was the option of printing out a scanable ticket.  However when we bought 4 tickets for the USC game, the mobile phone ticket was the only option.  I had no idea how that worked since, while I had used mobile airline boarding passes before, the mobile football tickets required a download to a smartphone wallet, which was a totally foreign concept for me.  However my son told me how to download one ticket to my wallet, one ticket to Mrs. Chandavkl's wallet, and send the remaining tickets to him.

When we got to the Coliseum things went smoothly at first, with no problem passing vaccine inspection, and at the entrance gate itself with the first three entry attempts being successful.  But with everybody else making it through the entrance, my ticket failed to work, generating a "Ticket Unknown" message, leaving three already inside the gates and me outside.  The gate attendant tried various things to no avail, telling me I had to go to the nearby customer service window.  While the line was short, it did take a while for my turn to come.  And when I showed them my mobile phone, after fiddling around with a bunch of things, they told me that because I had bought the tickets through UCLA, that even though these were USC tickets I would have to go to the UCLA customer service booth, which while completely on the other side of the Coliseum, was essentially where I was sitting.  So I messaged my family to go to their seats while I tried to gain entry.

Of course, kickoff time was approaching, so I literally ran half the circumference of the Coliseum and found the UCLA customer service booth.  After explaining what had happened, the clerk went to some kind of machine and came back with a physical ticket to get me into the Coliseum.  Of course I then had to go back through vaccination check, and my physical ticket scanned fine.  I then ran over towards my seat, Section 202, row 11, seat 35.  An usher pointed me to take the steps down from Tunnel 2 to row 11.  Except that there was no row 11.  I grabbed another usher who told me I was in Section 102, and that Section 202 was up from Tunnel 2.  However when I got to row 11, I didn't see my family at first.  I finally realized that the seat by the stairway was seat 1, such that seat 35 was, well, 35 seats away at the other end.   Fortunately I was able to cross over a walkway around row 8, and made it to my seat at the same time as the opening kickoff. c

I also need to comment on how trouble free getting to the Coliseum was from my son's house in Culver City, though obviously aided by the small crowd going to see two mediocre teams clash.  It was a five minute drive from my son's house to the Culver City Expo Line Station with ample underground parking and few other passengers waiting to board.  15 minutes later we alighted at the Vermont Ave. stop.  The trip back after the game is typically difficult since fans leave the game in a more compressed time frame than arriving, but it helped that many USC fans bailed out early.  And though it was a crowded hike back to the Exposition Park station, we were all able to squeeze onto the first train back to Culver City.

On The Road Again For Chinese Food

There was nothing unusual about our trip up to San Francisco in September of 2019, my 90th trip to the Bay Area.   Who knew it would be more than two years before I made my 91st trip last month?  And not only did the pandemic keep us at home, and for a while almost completely away from Chinese restaurants, but also left us in the dark as to what Chinese restaurants may have closed, and what new ones might have opened up in the Bay Area.  Arriving after dark on a Monday, I was fortunate to find the bright, newly opened Taishanese Cuisine on Broadway.  It was so busy we had to wait for them to clear a table before we could sit down.  Looking at the menu, Taishanese Cuisine was something new under the sun, with modern Taishanese food including Cantonese hot pot dishes, seldom if ever seen before in the United States.  Unfortunately, these and other dishes were all family sized, and indeed looking at the table setup the restaurant was clearly designed for large family gatherings, so we were stuck with the relatively small a la carte entree portion of the menu.

The curry chicken was a real surprise, as it was the first time I had ever seen that dish with fried, breaded chicken. 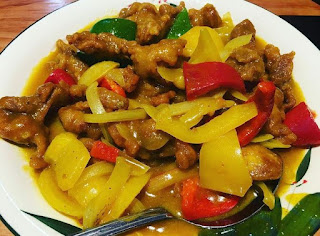 We also had a large dish of white ong choy.