Central Park Wedding Photos -- The Show Must Go On 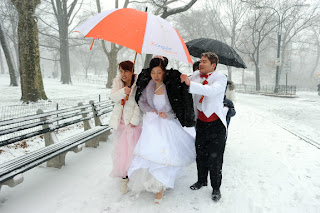 As mentioned here a few times in the past, Chinese immigrants from Fujian have developed a very interesting subculture in New York. New York is the center of the Fujian-American universe, as New York is the primary, if not sole entry point for this mostly undocumented group. Even if an immigrant finds a Chinese restaurant job somewhere else in the Midwest, East or South, they'll still return to Manhattan Chinatown, whether to look for a different job opportunity in another city, or just to hang out on their days off. A vast networks of buses transport Fujianese in the eastern half of the United States to and from New York without any need for identification.

Another reason why Fujianese immigrants travel to New York for is weddings. On Monday evenings, and to a lesser extent Tuesday nights, large Manhattan Chinatown restaurants, particularly in the Little Fuzhou area east of the Bowery, are packed with wedding banquets. Why Monday or Tuesday? Because this is the only day that most Fujianese restaurant workers get the day off. Early in the day, the bridal party travels to Central Park to take a gallery of elegant wedding photos to send to the relatives back home. Fujianese couples, usually not residents of New York, can be seen dressed up in their wedding finest, so common that this phenomenon has been well documented in the American press.

So what happens if the big day you planned happens to coincide with this weekend's blizzard, which as one wag stated, will result in no New Yorker ever dreaming of a White Christmas again? Well, you go ahead just as planned.
Posted by Chandavkl at 11:16 AM 5 comments:

The Future Is Now

The 1982 film Blade Runner depicts Los Angeles in the year 2019, a city where it continually rains and all signage is in Japanese. Well, that day has sort of arrived. It has rained 6 consecutive days in Los Angeles, and I don't mean six consecutive days where it rained, but rather six days of continuous rain. Maybe we're spoiled in Los Angeles, but I don't remember a period like that since around 1963 when I was at Dorsey High School. As far as the Japanese signage part, that's not happening. But have you ever driven the seven mile stretch of Valley Blvd. in the San Gabriel Valley? It's pretty much like that in Chinese.
Posted by Chandavkl at 3:30 PM No comments:

I'm probably as pro-business as anybody, but I become a little annoyed when you hear about a raid in which 10,000 fake purses were seized, costing the real manufacturer $5 million in sales, based on a value of $500 per purse. The fallacy in this analysis is that it presumes everybody who bought one of these fake purses would have paid $500 for a real one if the fake one wasn't on the market. A recent article about the low cost, $2.50 bus line between Manhattan Chinatown and Flushing Chinatown included a side comment that virtually every female passenger on this working class bus sported a fake Louis Vuitton handbag. Are you telling me that if they couldn't have bought one of these fake Louies on Canal Street for $35 that they'd spring the $500 for the real one?

One legitimate gripe the manufacturers could have would be the potential dilution of their product. If every middle aged woman in impoverished Manhattan Chinatown sports an LV lookalike bag, the cachet of the original has been dimmed to some extent. But based on the prices that real LV or Coach or Chanel or other designer bags bring, this dilution doesn't appear to be significant.

An iffier proposition is the effect of piracy on media items such as DVD movies. The lack of substitutability of originals and fakes doesn't hold nearly as true, as these days the copies are nearly the equivalent to the original. Yes, there are people like me who would never pay the retail price of a DVD, so if I on occasion buy a $3 DVD movie copy, this is not a sale that would have otherwise would have been made for full retail. But between the quality of the copies and the smaller price gap, this kind of piracy has a more tangible effect on the original product.

I must say that fake DVD marketing has its own fascinating elements. In New York Chinatown, like purveyors of fake purses, sellers of pirated DVDs may walk by you whispering "DVD DVD." They are very portable, able to bag their wares and disappear quickly if necessary. Strangely on a visit to the Chinese suburbs of Toronto just three years ago, high quality duplicate DVDs were being openly sold in the Chinese malls at multiple locations. However, in a return visit to the same stores a couple of months ago, while $3 to $5 DVDs were still being peddled, they were all Chinese language titles. Nevertheless, the surreptitious trade does manage to live on. While strolling in downtown Toronto's Chinatown, I saw a Chinese guy standing in front of a door holding a placard that said "DVDs-3 for $10", though he had no merchandise with him. So I asked the guy (in broken Chinese) whether he had any English language DVDs and he immediately opened the door and led me inside, and down a hallway which led to a small multi-tenant retail area, and ushered me into a video store. Like the stores in the mall, all the display items were Chinese. But I asked about English DVDs, and the gal said yes, and gave me a notebook with photocopied DVD jackets of American movies. I was struck by how this is just like the way they sell purses on Canal Street these days.
Posted by Chandavkl at 9:12 AM No comments:

One thing I would have never dreamed that I would develop an interest in is fake (or for that matter, real) women's purses. Yet, I notice every Louis Vuitton purse that passes by, and I wonder if it's real or a replica. This interest goes back around seven years ago when we were first introduced to the replica merchandise trade in New York Chinatown. Having heard about this interesting sounding phenomenon on Canal Street, we found ourselves on the northeast corner of Canal and Broadway. A large, old building contained numerous small narrow storefronts on both Broadway and Canal, plus an indoor swap meet behind the storefronts. It is there we met Monique from Malaysia, who has been our "dealer" ever since. Back then Monique operated from in front of another merchant's counter inside the swap meet. But her stash, counterfeit Louis Vuitton purses was kept on a set of shelves. Now if that seemed brazen, it was and it wasn't. Because when a lookout gave the word that police were in the area, a metal rolldown door would quickly be pulled down to cover the merchandise. And it wasn't just Monique hiding her stuff. You could hear the metal doors coming down on the exterior shops on the street, all in unison creating a concert of sorts.

A few months after we returned to Los Angeles I happened to read an article about the crackdown on Canal St. counterfeit purses. Purses were no longer being sold out of the stores, but rather by women carrying black plastic bags full of purses, on Canal St. between Broadway and Lafayette. When the police was spotted they would run off and hide on the side streets. A couple of months later we travelled to Canal St. in search of these ladies, but alas none were to be found on Canal or any of the side streets, nor were any replica purses apparently being sold in the stores that had them the year before. But it wasn't that the merchandise wasn't there. Rather an entire new distribution system had popped up. Initial contact would be made by a runner standing on the street whispering words like "Louie" or "LV", or perhaps a discreet inquiry to a shop owner. Soon you would be following a runner a block or two away from Canal St., on your way to what would turn out to be a secret showroom on the second floor of a restaurant. Or the showroom might be on Canal St. or Broadway, but way in the back of the shop behind a door not visible from the street, or up a flight of rickety steps in the storage area of the building. One secret showroom was accessed through a false panel in the swap meet which revealed a ladder to a second floor showroom.

This turned out to be the halcyon days for the merchandising of fake purses. Louis Vuitton sued the landlord that owned the building at Canal and Broadway containing the fake purse shops. That strategy was so successful that the building is now a Bank of America branch. Most of the secret showrooms closed down. But you can still buy fake purses in Chinatown. Chinese men and women loiter, mostly on the corners of Canal and Lafayette, with catalog pictures of different styles of Louis Vuitton purses folded up in their pockets. For a while, Monique staked out a space a half block up on Lafayette, but now she operates out of another storefront in another building on Canal St. She keeps her merchandise offsite a couple blocks away. You pick your bag from a picture in the catalog, then she runs off and brings it back in a black plastic bag. We had one incident with Monique where she sold us a defective purse, then when she said to meet us to make an exchange she never showed up. Mary believed she had been stiffed, but on my next trip to New York by myself I ran into Monique, who explained she had been arrested by the police right before she was going to meet us. She said it was her seventh arrest.
Posted by Chandavkl at 9:40 PM No comments: