As I had written many times, until quite recently Chinese restaurants in the Los Angeles had been marked by the presence of good, authentic Chinese restaurants being located in a small number of specific regions, originally Los Angeles Chinatown, and subsequently locations such as the San Gabriel Valley, with wide expanses of the region being a total wasteland for Chinese food.  Changing demographics have removed some areas being reclassified out of wasteland status, most conspicuously the Westside of Los Angeles, whose transition was aided by the influx of Mainland Chinese students attending school at UCLA.

When we moved into the Hollywood Hills some 30 years ago, Hollywood was one of the most barren wastelands when it came to Chinese food, not surprising since there were very few Chinese residents in the area. I remember that when we arrived, the closest Chinese restaurant to our house wasn't even identifiable as a Chinese restaurant when you drove or walked by.  It was called The Inn Place, on the corner of Bronson Ave. and Franklin Ave., one of the subcategories of Chinese restaurants where somebody buys an existing restaurant and doesn't bother to change the name even when converting the restaurant from non-Chinese cuisine to Chinese fare.  (How else can you explain Chinese restaurants with names such as O'Toole's Roadhouse or Bavarian Gardens?)   From what I can tell, The Inn Place was previously a soul food restaurant before turning into a Chinese restaurant.  It touted itself as a Mandarin and Szechwan restaurant, the type that sprang up beginning in the 1970s serving new wave non-Cantonese Americanized dishes like hot and sour soup, kung pao chicken, mu shu pork, and double cooked pork.   But it also served old time Cantonese Americanized dishes like egg foo young, egg drop soup, shrimp in lobster sauce and paper wrapped chicken.  I know I only ate there once back in 1991, and I have no idea what I might have ordered.

Over the next 25 years I ate at several dozen Chinese restaurants in Hollywood, all aimed at tourists or local denizens.   There was actually one pretty decent place that was on Cahuenga Blvd. in the early 1990s called Diamond Seafood and BBQ, but it didn't last very long.  One whose memory sticks with me was a place called Lam's Kitchen, I believe on the corner of Hollywood Blvd. and Wilcox Ave., with the most awful chow fun ever, seemingly merely soy sauce poured over chow fun noodles that had not been fried.

Unlike areas like West Los Angeles, Pasadena, and Thousand Oaks where demographic changes have spawned the opening of numerous authentic Chinese restaurants, no such movement has taken place in Hollywood.  Consequently I was stunned five years ago when ixlb Dimsum Eats opened up on the corner of Sunset Blvd. and Bronson Ave., and in light of the demise of The Inn Place, becoming the closest Chinese restaurant to my house.  And along with the disbelief that a place like that could open up at that location, I along with others were suspicious that either they were peddling factory made dim sum, manufacturing their own low quality dim sum, or creating a product geared towards the tastes of tourists and local office workers.  Indeed, positive reviews from legitimate Chinese restaurant reviewers were dismissed by message board critics.  But five years later, ixlb is still in business and I can say that their crispy baked bbq pork buns (i.e. Tim Ho Wan style) are the best in town, and a number of their other offerings, all definitely made in-house, are quite good.  Not that I'm a regular here as many of their items cost double what you pay in the San Gabriel Valley, and what distinguishes their Tim Ho Wan style crispy buns is the extra buttery taste which is something I should probably avoid.  But it's nice to know ixlb is there when I want it.

Moreover, last year a branch of San Gabriel Valley's Northern Cafe opened up just off the corner of Hollywood and Vine.  Northern Cafe is largely responsible for the spread of great, authentic Chinese food into West Los Angeles.   For many years Westside Chinese food aficionados were clamoring for (or perhaps just dreaming of) a major San Gabriel Valley Chinese restaurant player to open up on the Westside.   They got their wish when Newport Seafood opened up their Beverly Hills branch in 2014, only to quickly crash and burn.  But in 2016, the little known Hacienda Heights based Northern Cafe opened up right smack in Westwood Village, and was a smash hit.  Northern Cafe now has three separate branches in Westwood Village, and numerous other authentic Chinese restaurants have opened in Sawtelle Japantown and other parts of West LA since 2016.   So despite the lack of Chinese university students in the vicinity or any significant demographic changes in Hollywood, Northern Cafe rolled the dice again and opened up in Hollywood, mere weeks before the start of the pandemic.  They did have to close during the pandemic, but also were able to reopen, offering the same dumplings and noodles in Hollywood that they offer in the San Gabriel Valley and the Westside.  They still seem to be hanging on and if tourism returns to Hollywood they might hit the jackpot again.  And for now it's just great to have this option in the neighborhood.  If only parking wasn't such a pain.

Perhaps the most surprising Chinese food foray in Hollywood has been Love Boat Kitchen, a Taiwanese vegan restaurant at the corner of Vine St. and Fountain Ave.   This is sort of a pop-up and is currently on hiatus, but given that I'm not aware of any vegan Taiwanese restaurants even in the San Gabriel Valley, this Hollywood location was all the more remarkable.  It's "sort of" a pop-up because the Taiwanese operators of Love Boat Kitchen were the owners and operators of the existing restaurant at that location, Cocobella Creamery, specializing in vegan ice cream.  So Love Boat Kitchen was more of an alternative weekend menu to the regularly operating restaurant than a true pop-up.  Dan dan mein made with impossible burger "meat" anyone?  And also a shout out to Maxim Chinese Food on Hollywood Blvd. at Gower Ave.  Yeah it's typical steam tray Chinese fast food, but with one interesting extra--char siu!

Of course Hollywood is still Hollywood, serving inauthentic and often overpriced Chinese food.  I can't finish this article on Chinese food in Hollywood without a dishonorable mention to the Hollywood branch of Tao on Selma Ave., just south of Hollywood Blvd.  The Las Vegas branch of Tao was for many years the perennial highest grossing independent restaurant (any cuisine) in the United States, until they opened a sixth branch and no longer qualified as being an independent restaurant.   With such a pedigreed Chinese restaurant so close to home I had to go there no matter what the cost.  And that cost was ridiculous.  My order of orange chicken set me back $39.  It looked pretty but it was awful. 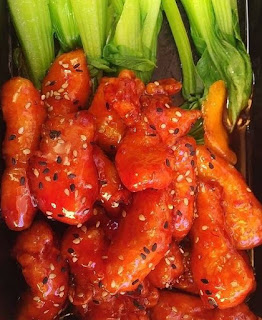 And it was smaller than the fabulous orange chicken I had at New China Mongolian BBQ on Crenshaw Blvd. in the hood a few weeks ago, which cost me $4.50.  Tao was also almost costlier in a different way.  This was the most poorly lit restaurant I have ever stepped foot in, and having gone there prior to my recent cataract surgery which now allows me to see at night again, I barely avoided tripping over unseen obstacles, stumbling but not falling down while trying to maneuver around the premises.  Perhaps their plan is to make it so dark that you can't see what you're eating.