That old binder was actually full of materials from a number of presentations I had given from the mid-1970s through the early-1980s, at which time I withdrew from writing and speaking on ethnic topics, though I did continue to speak on boring income tax topics through the late 1990s.  The binder included presentations that I have no current recollection of ever having participated in.  For example, back in 1982, I was master-of-ceremonies for the Chinese Historical Society of Southern California's commemoration of the 100th anniversary of the Chinese Exclusion Act.  Really?  And I gave a presentation to the Historical Society of Southern California at the long defunct Hong Kong Jade Garden restaurant?  I have absolutely no recollection of that presentation or even the restaurant.  And during the 1981 Los Angeles Bicentennial Celebration, I was part of the city's Bicentennial Speakers Bureau and did some speaking on the Chinese in Los Angeles.  Perhaps that's how some of my presentations came about.

I spoke at the University of Southern California at a conference put on by the Los Angeles Unified School District for a program called Project Follow-Through to educate school district personnel on ethnic studies issues, covering Asian American issues with my co-speaker, Professor Harry Kitano from UCLA.  I spoke to the California Conference of Historical Societies at General Lee's Man Jen Low restaurant on Chinese American history.  I was interviewed by Beverly Ann Lee of KNX radio about the Chinese community in Los Angeles, as well as Truman Jacques and Patricia Stich on Channel 2 (I think it was still KNXT back then) for the "It Takes All Kinds" public service television show, back when the FCC mandated public service television shows.

Mind you, I was doing all this while working as a tax accountant for Kenneth Leventhal & Company, a certified public accounting firm that specialized in the real estate industry.  I was puzzled back then why someone like myself without any academic credentials was able to give all of these presentations and write the articles I produced in that period on the Chinese in Los Angeles, the Chinese exclusion laws, and postcards of American Chinatowns, that were noted in the above referenced blog posting.

However upon reflection decades later, the answer is more clear to me.  As I previously recounted, I attended the first ever Asian American studies class offered at UCLA back in 1969,  which was quaintly titled "Orientals in America."  My class term paper on the history of the Chinese in Los Angeles was the basis of a number of subsequently published (though not especially widely circulated) articles on that subject.  Meanwhile, while going on to attend law school at UCLA, I spent my spare time in the law library poring through court cases involving Chinese Americans, mostly deportation cases under the Chinese Exclusion Act, not with any academic intent, but merely because I found the topic so riveting.  In so doing, I was getting in on the ground floor of an area for which no academic infrastructure had yet developed, and for which there was a giant vacuum which initially could largely be filled by amateurs like myself.

Indeed, look at the Chinese Historical Society of America, founded in 1962 by lay people from the San Francisco Chinese community.  CHSA developed two pioneering historians--Him Mark Lai, a mechanical engineer, and Philip Choy, an architect.  Similarly, the Chinese Historical Society of Southern California was founded in Los Angeles Chinatown in 1975, again by community members like Rev. Paul Louie and Stan Lau from the Department of Water and Power.

For quite a few years now, Asian American studies has been a scholarly discipline like any other subject area taught on a university campus.  With all of the intellectual academic expertise that has built up over the years, there's no way that an amateur non-academic could have the impact or exposure today that I was able to experience way back then.   It was a unique opportunity for a layman to be there at the start of what turned into something so great.  I will always treasure the experience, and obviously it's a major part of the observations I make about Chinese food today.
Posted by Chandavkl at 10:48 PM 1 comment:

As I have mentioned numerous times, the presence of over 300,000 Mainland Chinese university students in the United States has altered the face of Chinese dining in the United States, bringing authentic Chinese food to cities and towns where such a find would have been unimaginable even just a decade ago.  As a big fan of both college sports and US geography, and having visited all 50 states, I have used my familiarity with both to track down authentic restaurants in many college towns.

Recently I was watching the replay of an ESPN college football telecast from a couple of years ago, when they did a promo for their College Game Day telecast.  It was a slow period early in the season, so ESPN decided to do their show from a small (athletically speaking) campus, James Madison University in Harrisonburg, VA.  While I had heard of that school, I was surprised that I had never heard of the town in which it was located.  Looking it up, I saw that it was in rural Virginia, a two hour drive away from both Washington DC and Richmond, explaining why it had never come to my attention.  Obviously I decided to check whether James Madison was a school that had enough Chinese students to warrant authentic Chinese food, and indeed it is, with A Taste of China Restaurant providing anything a homesick Mainland Chinese student would want to eat.

The menu at A Taste of China is absolutely fascinating.  As I have written before, these college town Chinese restaurants serve a mixed audience--students from China, students not from China, and local residents.  The result is an interest mashup of old time Americanized Chinese dishes and cutting edge items from the Chinese interior.  However I don't think this has been any more starkly demonstrated than by the menu at A Taste of China.  For example, look at the "soup" section of their menu. 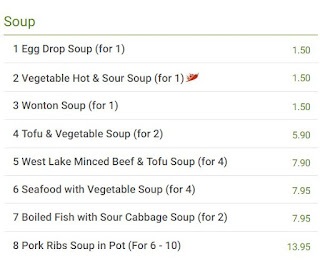 Talk about going from the ridiculous to the sublime!  From the most primitive Toishanese American classic egg drop soup to the slightly more sophisticated wonton soup to the post 1960s immigration reform "northern" Chinese Americanized classic hot and sour soup, to the post immigration reform advanced Cantonese Westlake beef soup, to today's Sichuan boiled fish soup and pork rib pot.  It's like 150 years of Chinese dining in America capsulized in 8 lines.

Likewise, the hot appetizer section of the menu was also like a diorama of Chinese food in America. 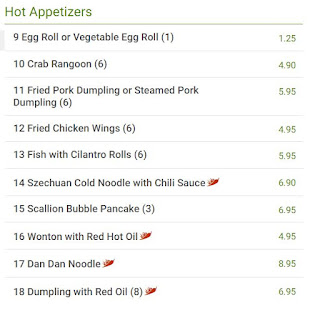 Typically we think of Chinese restaurants in the US as falling into distinct categories--old time Americanized Chinese, more modern Americanized Chinese, and modern authentic current Chinese regional cuisine.  But at A Taste Of China in Harrisonburg, and undoubtedly others in different college towns, they can be all rolled up into one.

Posted by Chandavkl at 10:52 AM No comments: