Not being so fortunate foodwise as to be living in or near the San Gabriel Valley, we often have to settle for dining in Los Angeles Chinatown for our Chinese food fix.  While there's totally no comparison to the San Gabriel Valley, at least with our Cantonese taste buds Chinatown can be a decent substitute for an occasional meal.  Well at least that how it's been until now.  However all of a sudden it seems like our Chinatown choices just got a lot slimmer.

We actually had a reasonable rotation of Los Angeles Chinatown choices including Phoenix Inn, the original branch of the San Gabriel Valley chain, and probably the only San Gabriel Valley quality Cantonese restaurant in Chinatown, Hong Kong BBQ (formerly known as Sam Woo BBQ), Full Moon House, J & K Hong Kong, Fortune Gourmet Kitchen and Master Chef.  But then Master Chef closed down as did J & K Hong Kong.  The food at Phoenix Inn seemed to fall off a cliff (or at least maybe they got a new chef), and on top of that they started charging $1.60 for a single bowl of white rice.  Meanwhile Hong Kong BBQ has gone downhill, while increasing their prices, and Full Moon House has likewise gone downhill.  That leaves Fortune Gourmet Kitchen, and well, uh, that's probably it.

Out of desperation we went back to ABC Seafood for the first time in about seven years but that wasn't the solution.   Relatively recent visits to CBS Seafood, Ocean Seafood and Golden Dragon were not the answer.  Maybe East Garden, but they were closed for a disco party when we tried to eat there earlier this month.  So while we may still eat in Chinatown for a bowl of pho or something like that, an occasional visit to Fortune Gourmet Kitchen may be our only option.

Filling A Hole In Our Cantonese Rotation

While I have written a number of times on the diminishing share that Cantonese restaurants have in the San Gabriel Valley and other Chinese American communities, the issue is really hitting close to home with the recent closure of Embassy Kitchen in San Gabriel, the seeming dinnertime downhill run by Longo Seafood in Rosemead, and seeds of a dropoff also at Seafood Palace in Monterey Park.  However, it looks like we have found a suitable casual Cantonese dining replacement in Jasmine House in Alhambra.  We were scared off by some negative early reviews, but some subsequent positive comment encouraged us to take a second look, and two more recent visits has made this the most likely candidate to replace the void in our rotation.

Jasmine House is on the busy block on Main Street just west of Garfield, and at least on Saturday nights its half filled dining room pales compared to other restaurants on the block such as Boiling Crab, Road to Seoul and a few others, but we prefer Jasmine House by a wide margin.  The most impressive dish we've found so far is the awkwardly named French style fish.   In the past few years, a new dish swept onto Hong Kong style restaurant menus in Los Angeles called French style filet mignon, seemingly a variation of the Vietnamese shaking beef.  With its slightly spicy, deeply savory flavor,  usually presented on a bed of lettuce it's now a standard here in Los Angeles.  In recent years, a few Hong Kong style restaurants have added French style fish, French style shrimp and French style noodles to their menus.  These dishes are prepared with the same savory sauce as French style steak as well as the garnishing in French style steak.  Except that originally, the "French" in French style beef referred to cutting the meat into small, bite sized cubes, something which isn't done with French style shrimp, fish, or noodles. 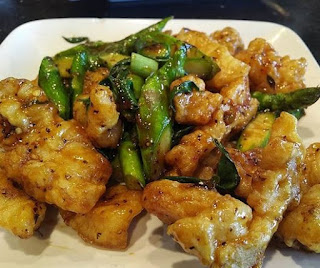 A visually interesting and excellent dish was the fish tofu with baby bok choy. 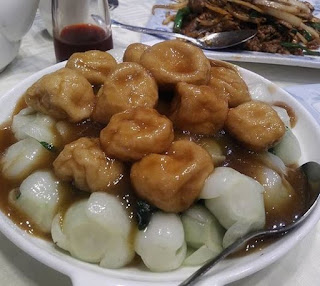 Definitely not Cantonese but still very good was the cumin lamb. 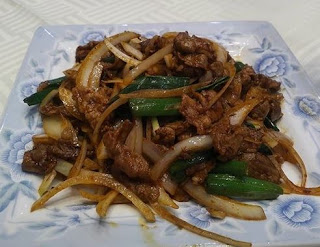 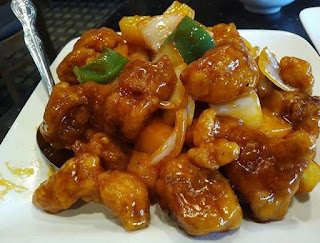 Not sure why they comped us half a Peking duck.  Maybe they have a bonus special we didn't know about, but it was the best free food I've had. 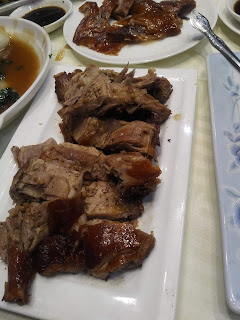 I should comment that there are still the higher end Cantonese dinner options in the SGV like Sea Harbour, Elite, Lunasia, China Red, King Hua, Happy Harbor and so on.  But as seems to be the case with much of the Chinese community (as indicated by the relatively sparse crowds at these restaurants on Saturday nights), we reserve these venues for special occasions and not for casual weekend dinners.
Posted by Chandavkl at 10:41 PM 26 comments: