On one of the local restaurant message boards I once facetiously posted that there were multiple teams of chowhounds criss-crossing the San Gabriel Valley to be the first to find the latest great Chinese restaurant opening. Well, fellows and gals, we missed one, because Sands Chinese Restaurant, which opened two years ago in Irwindale, is really a gem, one which I’ve never heard anybody mention until I stumbled onto a posting that one of the operators had made on a Facebook group.

Perhaps first order is to explain the name of the restaurant, since there’s nothing Chinese about “Sands.” From what I can tell, the chef here used to work at the Sands Casino in Macao, which would explain the one of the stunning Yelp reviews that claimed Sands was the best Chinese restaurant in the San Gabriel Valley, which I assumed came from a relative or friend of the owner. It would also explain the quality of the food here and some of the less common, upscale dishes that they serve here. Unfortunately, most of those dishes are advance order only so I didn’t get a chance to try any this time. Also we were hampered by the fact that one of our group is midway in the tooth implant process and we had to limit ourselves to soft dishes. Nevertheless this was enough to give an idea of the quality of the restaurant.

One other unfortunate thing about ordering only soft foods was that none of the dishes were particularly photogenic. But the food was excellent across the board.

This is the crystal noodle with egg whites. 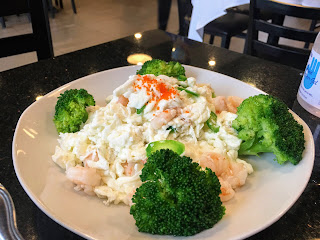 Sweet and sour fish, nice and thinly crunchy and tasty. 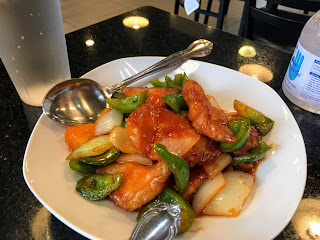 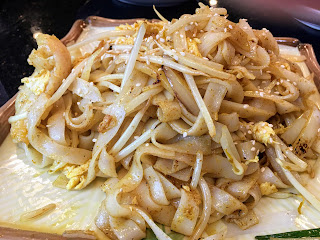 The special advance order menu is something we don’t see very often in Southern California Cantonese restaurants. Items on the Sands Menu include mixed meat and vegetables in egg white pancake, pipa tofu, braised stuffed duck, braised pork belly, sweet and sour fish with pine nuts, and chicken wings with glutenous rice. I actually didn’t see the prices of these, except the pipa tofu at $38. A couple other nice dishes on the regular, fairly short menu were the thousand layer tofu and the rack of lamb. 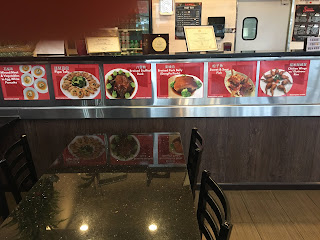 Paradise Dynasty Is So Much More Than Xiao Long Bao

A few months ago I heard about the opening of a branch of the famed Paradise Dynasty Chinese restaurant chain out of Singapore in Costa Mesa's South Coast Plaza super regional shopping mall.  Since South Coast Plaza is  not exactly in my normal geographic territory I didn't have an opportunity to stop by until recently.  Their slogan is "Legend Of Xiao Long Bao", and while the XLB is excellent, what caught me unaware was how good the rest of their menu was.

I don't think you will ever get a consensus on the best XLB around simply because different diners look for different things.  Some diners prefer thin skins, some prefer thick, and no restaurant will do it both ways.  Similarly some people prefer lots of soup, others more moderate.  And these days, the varieties of XLB go in all directions.  With the famed Din Tai Fung also operating in South Coast Plaza, it is inevitable that people will compare the restaurants, and largely based on the XLB.   And I don't think a consensus as to which is better for basic varieties will be found.  However, for specialty varieties, Paradise Dynasty clearly is the place to go.

For sure, Paradise Dynasty's black truffle XLB is the most flavorful single examplar of XLB I have ever had. Nor have I had one with so much truffle flavor.

The black truffle XLB is part of Paradise Dynasty’s multicolored, multiflavored collection.  It includes the green luff gourd, light brown foie gras, yellow cheese, orange crab roe, gray garlic and red Sichuan varieties.  All of these XLB are naturally colored.  These are not just gimmicks, except perhaps for the cheese XLB, as each variety has its own distinct and wonderful flavor.  I actually liked the cheese XLB also, but I think I'm in the minority on that one. 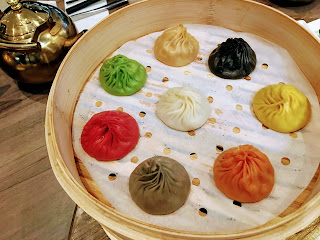 There's nothing wrong with the kurobota pork and chicken (pictured) XLBs either. 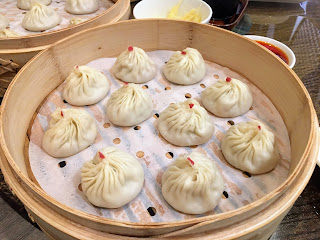 They also have shen jen bao on the menu, which is a little fluffier than what you normally find. 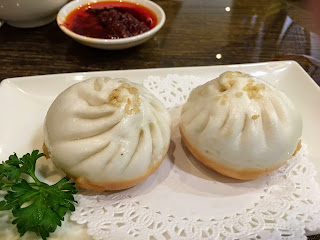 Was able to try a few appetizers.  The clear star was the chilled tofu with soy sauce vinagarette.  Absolutely delicious. 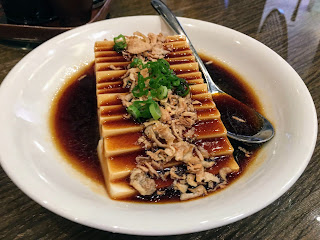 There's more than meets the eye to their lettuce rolls.  A refreshing palatte cleanser, it really isn't lettuce, but rather Taiwanese A choy with a wonderful sesame dipping sauce. 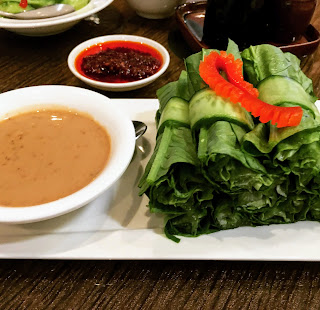 And this is their cucumber salad. 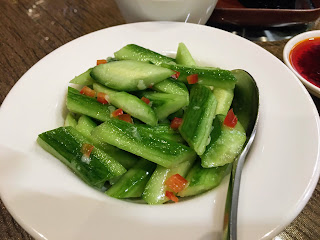 Interestingly, another signature dish is the radish pastry. The early bird gets the worm as this sells out early in the day. Particularly noteworthy is how the traditional heavy turnip/radish cake dim sum has been turned into such a light and delicate dish.

The prawn and Kurobuta pork dumpling in chili vinaigrette may be the best spicy won ton you’ll find anywhere, including the place at the other end of the mall.

But really, the attraction of Paradise Dynasty is their wide selection of entrees.  Personally my favorite dish was this scrambled egg white with fish and dried scallop, topped by an egg yolk which is then mixed into the dish. Never seen anything quite like this before and this may have been the best thing I ate all year.

Yes, this is sweet and sour fish, and you can get it anywhere. But not like this. Excellent batter, but that’s not unique. What distinguishes this dish is the fact that while there’s the crunchy exterior, the fish is soft and juicy. I have no idea how they pull that off. Oh, and there’s a touch of plum in the sweet and sour sauce.

Another best in class dish is the pork chop fried rice.  It looks just like the same dish at Din Tai Fung, but even if it is a copycat dish I'd rather have this one.   How do they make the pork so soft and juicy? You can order the pork chop as a separate stand alone dish.

I've paid more before for chicken broth but their double boiled chicken soup is the best. 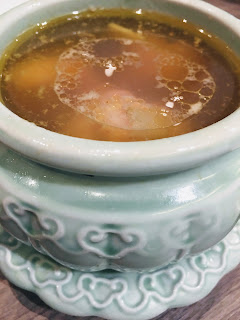 Another best in class dish is the ong choy, which I've eaten at hundreds of restaurants. 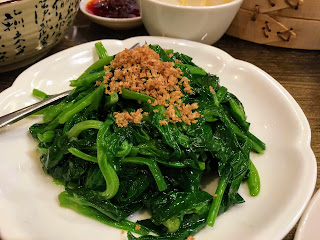 Dan dan mein was a little too soupy for my tastes. 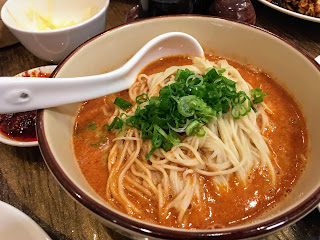 But the stir fried noodles with pork was surprisingly impressive. 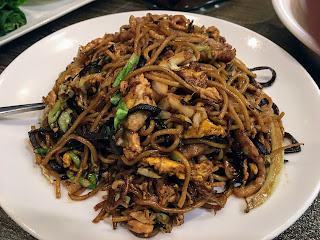 Another surprise was the shredded pork in black bean paste.  Actually it was a double surprise--not only the taste of the dish, but also the East Coast style thin Peking duck type wrapper was so great! 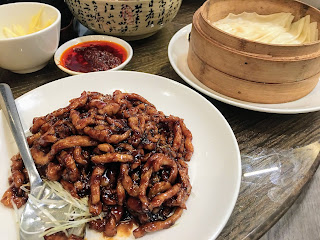 Paradise Dynasty is proud of their dessert creations, and rightly so. For most of my life, Chinese restaurant desserts were primitive at best.  However Chinese desserts are really coming into their own  and Paradise Dynasty has assembled a nice assortment.  Indeed with Palatte in the San Francisco Bay area putting a similar emphasis on desserts, one can no longer say Chinese restaurants don't have good desserts.  This is Paradise Dynasty's red bean glutinous rice roll with peanut topping.

The black sesame peanut topped glutinous rice ball is great, hot out of the oven. 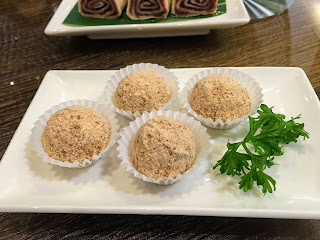 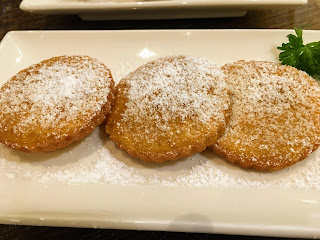 And the chilled snow fungus in peach resin. 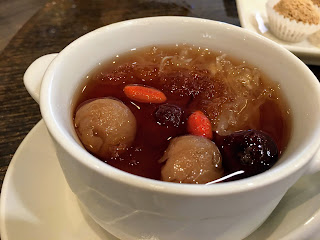 Paradise Dynasty is a significant addition to the local Chinese dining scene.  A lot of people may assume it's some kind of Din Tai Fung wannabe, but it is certainly much more than that with a broader array on their menu of outstanding Chinese dishes.  Special thanks to the head chef and the head dim sum chef! 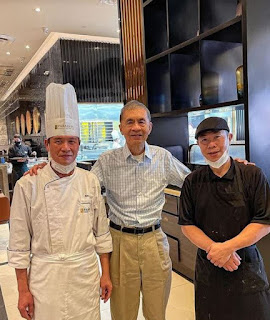