As I have often said about my Chinese food writings, it's just not about the food.   Along these lines, I recently encountered a Chinese restaurant in Walnut which is rather interesting, aside from what they serve and how good the food is.  For one thing there's the name of the restaurant.  If you go to Yelp, it's described as Yummy Cafe, but when you drive up to the restaurant all you see is signage that says "Liu & Sun Enterprises." 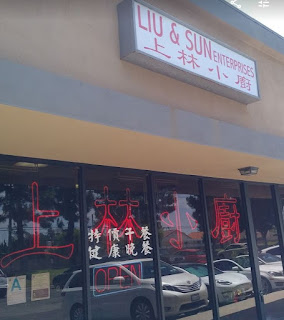 Now I don't know whether it was like that restaurant in New York Chinatown that was literally called Dining Room Management Group Inc., where my best guess was that the owners were unaware that it was OK to use a DBA for their operation.  Or perhaps in this case there's some other business activity going on premises here, as almost all the business is take out, but there seems to be lots of excess space that's not needed for the restaurant operation and doesn't look like part of a restaurant. 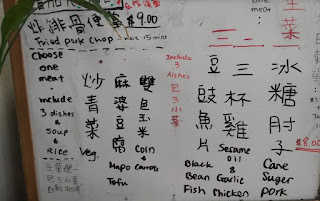 When I saw the white board I was totally confused.  I walked in right behind another customer and when he got to the counter he put his money down, said something very brief to the gal behind the counter, and in a minute was delivered a box of food.  But since he put his money on the counter right away, and there wasn't a takeout order waiting by the counter, it didn't seem like a typical call ahead take out transaction.

However with a little explanation it all makes sense.  Liu & Sun Enterprises a.k.a. Yummy Cafe has a daily revolving menu, hence a printed menu isn't practical.  For $7, you get the three side dishes listed on the left side of the white board, plus a container of soup, plus your choice of an entree from the right side of the board.  The sides and soup are pre-packed in the kitchen, so all you need to do is designate the entree you want, and they can finish what essentially is a bento box for you. 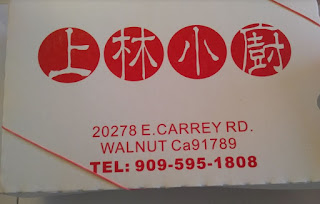 Which is neatly packed on the inside, and the contents are quite tasty. 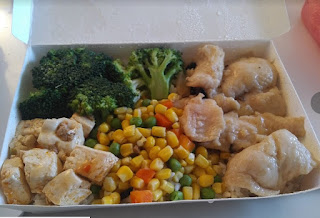 There's a lot to like about Lin & Sun Enterprises a.k.a. Yummy Cafe.  You get your food almost immediately, fresher and better than steam table food, with an entree, three sides and soup for $7, with items rotating daily.  Why bother cooking at home?

Posted by Chandavkl at 7:02 PM