For almost the first 150 years of Chinese food in America, the dining scene was dominated by Cantonese food.  Indeed for the first 120 years it was the rural version of Cantonese food from Toishan and surroundings which characterized what Americans understood to be Chinese food.  Starting around 1970, Cantonese style food from Hong Kong came onto the scene, and has largely been the pre-eminent style of Cantonese food in America since then.  But starting in the late 1990s, non-Cantonese regional cuisines began to become more and more commonplace, such that today in most Chinese-American communities, non-Cantonese regional food styles prevails by a wide margin over Cantonese food.

A commonly used term to describe the dominant non-Cantonese food is "Mainland" food, with the term Mainland being a term of distinction for Mainland China, as opposed to Hong Kong and Taiwan.  `Of course most of you are probably thinking that Cantonese food originated in the city formerly known as Canton, now known as Guangzhou, which certainly is on the Chinese mainland. But "Mainland" food is identified with migrants who arrived from China after diplomatic relations were re-established between China and the United States in the 1970s.    While Cantonese people have migrated to the United States during this period, they had no effect on Cantonese cuisine in the United States which combined historic Toishanese food that radiated out of America's historic Chinatowns, as subsequently modified and supplanted by influences from Hong Kong.

Well, I should say there was no Mainlander effect on Chinese food in the United States until last year.  That's when the Guangzhou based HL Peninsula Seafood restaurant opened up in South San Francisco.  So on our Bay Area visit last month, HL Peninsula was high on our list of dining destinations.

Now I can't say there was a large apparent difference dining at HL Peninsula as opposed to a typical Hong Kong style Cantonese seafood restaurant.  The only thing truly distinctive was this plate of fruit at our table waiting for us as we were seated. 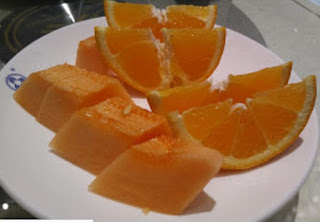 Visually, HL Peninsula, as one of the newest venues that we have visited, was also once of the most nicely decorated with the giant TV screens that seem to be de rigeur at newly opened Chinese seafood palaces. 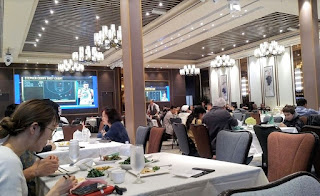 Our first dish was something that we never had before, sliced fish and pumpkin soup.  Totally fabulous! 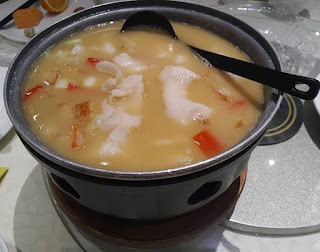 The next dish certainly wasn't anything new, but the French cut steak was definitely very good. 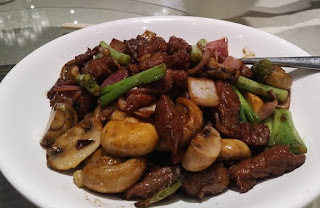 And the clams with vermicelli was another winner. 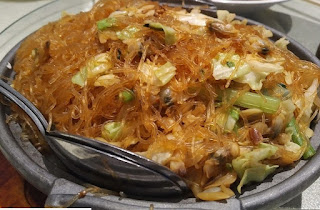 The snow pea leaves were good but nothing different from a typical dinner. 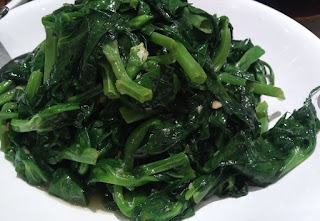 HL Peninsula proved to be such a hit that a second branch of the chain, HL Pearl, has opened up in nearby Burlingame.

Actually, HL Peninsula was not the first Guangzhou based restaurant chain we ate at on this trip.  Before we got to San Francisco, we stopped at the Pacific Pearl shopping center in Pleasanton where  Yin Ji Chang Fen, specializing in rice noodle rolls opened up.  Yin Ji Chang Fen was actually something quite different from what we were used to, as a sit down restaurant focusing on rice noodle rolls.  Furthermore, these weren't the rolls we were used to seeing in the United States, but rather a burrito sized meal in itself.   This marinated beef roll was also a balanced meal in itself as it had a thin layer of green vegetables on the inside. 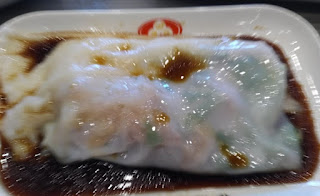 They also had an egg filled rice noodle roll, something I had never had before. 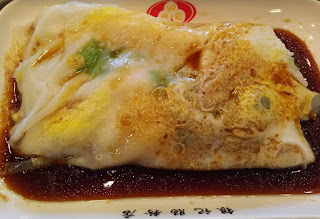 Mention should also be made of the Guangzhou based Chinese dessert chain Sweethoney, which has also opened up a number of branches in the San Francisco Bay Area.

Yin Ji Cheng Fan has also just opened up in San Gabriel, so Los Angeles area residents can enjoy Guangzhou Cantonese food, too.  Actually, we had a small taste of Guangzhou cuisine as I described last year when Guangzhou based Ooak Kitchen opened up in Culver City.  As I described at the time that was a puzzling opening as there is not a major Chinese population in or around Culver City, but nevertheless Ooak Kitchen served a distinctively authentic Guangzhou style vegetarian cuisine, including an incredible vegetarian beef steak made out of a gigantic mushroom imported from China.  Needless to say, Ooak Kitchen's concept didn't last very long, and they rebranded the restaurant Fifty One Kitchen, with a combination of more standard Chinese vegetarian and nonvegetarian dishes, with nothing to evidence the restaurant's roots in Guangzhou.

It would not be surprising to see more of these Guangzhou based restaurant chains open up in the United States, raising the question of whether the term "Mainland" Chinese cuisine can still completely exclude Cantonese cuisine.  I think the answer to that question is in the negative, based on my recent conversation with Jack Wang, the Millennial owner of Miao Miao Xian restaurant in Monterey Park, which serves paper wrapped fish and other Sichuan style dishes.  Despite the style of cuisine his restaurant serves, Wang is Cantonese.  But he also describes himself as a Mainlander.  So if the Cantonese owner of a non-Cantonese Mainlander restaurant calls himself a Mainlander, I would think Guangzhou style Cantonese food is also Mainland fare.

Posted by Chandavkl at 9:35 PM