Meeting With A Fan

I dropped by the new skewer restaurant Miao Miao Xian on Garvey Ave, in Monterey Park for a quick order to go.  The guy behind the counter says "I know you--you're the guy on Instagram!"  Turns out he was the owner of the restaurant, Jack Wang, and apparently is a big fan mentioning that he saw my Instagram post from Bay Cafe in Alhambra the same day he was there, and was impressed he was there the day that I was.  (He also made an interesting comment about all the young people gravitating towards Alhambra and the term "626" falling out of favor.)  He said he wondered if I might one day come by his restaurant, which is actually a branch of a pre-existing restaurant of the same name in Rowland Heights.  I told him I had been to the Rowland Heights location and  I also mentioned the strange set up of that particular shopping center, where you have to drive on a driveway and past Denny's before you reach the shopping center entrance.  He indicated that shopping center had its issues.


We had a very nice conversation about the Chinese restaurant industry, he saying that it was so ridiculously competitive, and that the Rowland Heights location had more competitive pressure than Monterey Park.  He mentioned they were thinking about opening another branch in Tustin.  He has some very good ideas about running a restaurant--he's importing mantis shrimp to serve at his restaurant, which is something I don't recall seeing at any Chinese restaurant in Los Angeles.  He's also targeting the millennial Yelp/Instagram crowd which he says seems to be more enthralled with talking about food and the way  it looks, rather than how it tastes.  I told him how astute he was as this was the same thing that the Koi Palace group was doing with their Palette brand up north in targeting millennials and their sensibilities.


Jack mentioned he went to school at the University of Indiana, one of my very favorite college campuses, and we also discussed college campus Chinese food as affected by Mainlanders, such as in Iowa City, with he mentioning he'd rather run a Chinese restaurant in Bloomington, IN, because of the competitive pressures of operating in the Los Angeles area. He was amused when I explained why LA Chinatown was the way it was, with little Mainland and no Sichuan food, powered by a majority of Hispanic diners.


One very interesting comment he made was that he was a "Mainlander", albeit of Cantonese origin.  This plays directly into my next blog article which will talk about the arrival of Guangzhou based Chinese restaurants here in the US, and how heretofore the term "Mainlander food" had previously excluded Cantonese food, but whether that changes with the arrival of Guangzhou based restaurants.  I guess the answer is yes based on Jack’s answer.  He also asked me about how I ended up writing about Chinese food so I gave him the whole story about attending the first Asian American studies class offered at UCLA, which led me to look to eat a Chinese restaurants as I traveled the US.


When my order arrived he wouldn’t let me pay for it, since he said it was an honor for him to host me.   So I thanked him and then asked for a favor.  Since I had ordered chicken skewers, they came in the standard issue long paper bag, so I asked whether he had a dish I could put the skewers in for an Instagram posting.  He seemed genuinely flattered that I would post from his restaurant so he came back with what he described as the fanciest plate they had in the restaurant.  And when I posted the picture he repeated in an Instagram comment that he was honored by my visit. 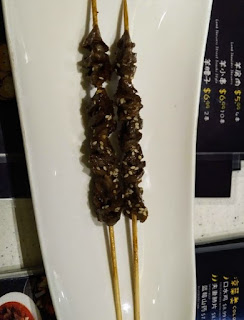