Much Ado About Nothing--Tim Ho Wan in Irvine

Tim Ho Wan in Hong Kong gained notoriety several years ago when it became the most economical restaurant in the world to garner a coveted Michelin star.  While Michelin star restaurants evokes visions of meals that run into hundreds of dollars or more per person, Tim Ho Wan made the cut charging about $10 per person.  We visited Tim Ho Wan in Hong Kong five years ago and indeed were impressed by their dim sum, like everyone else particularly enthralled by their crispy baked bbq pork buns. 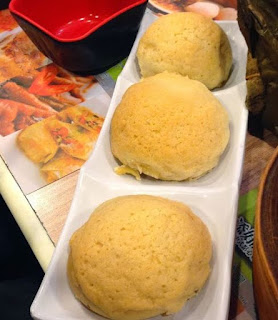 Consequently when it was announced last summer that Tim Ho Wan was going to open up a branch in Irvine, originally scheduled for this past winter, this was really big news in the local culinary world, both in the Chinese-American community, as among the general foodie world.  Anticipation was high, and indeed when the restaurant actually opened this past May, not only did the news dominate the local culinary scene, but Los Angeles' television stations actually showed up at the restaurant on opening day.  Days later when a friend tried to beat the crowd on a Sunday morning and showed up an hour before opening, she found there were already 300 people in line to get in.


But last summer when the planned Tim Ho Wan opening was announced I painted a different picture as to the upcoming opening. I pointed out that existing Tim Ho Wan locations in the United States were nothing to write home about except for the crispy baked bbq pork buns. I did have hopes that since Irvine is a Chinese dining hotbed, compared to the existing locations in Manhattan’s East Village and Times Square, and Waikiki beach, Tim Ho Wan would want to bring their “A” game to this location. Those hopes seemed to dim after evaluating the reviews after the Irvine opening last month despite the massive waits, as while there were some favorable reviews, most indicated that Tim Ho Wan was a one-trick pony with only the crispy baked bbq pork bun worthy of acclaim.  With the crowds starting to die down I figured it was time for a first hand look. Unfortunately, even with diminished expectations, I found the visit disappointing.

On the positive side, they did a really nice job of renovating the old Capital Seafood space–light, airy and modern.

A pleasant surprise was the beef cheung fun, one of the best versions I’ve eaten, enhanced with the flavor of orange peel. I do find it ironic, though, in that Tim Ho Wan gained their fame as being the most inexpensive Michelin starred restaurant in the world, something that clearly doesn’t hold in their US branches. The order of three rolls was almost $6, and like everything else we ordered the items themselves were undersized compared to normal dim sum.

Something different was the fried tofu, shrimp and avocado roll. I presume this was an ode to their California setting, effectively their version of a California roll.

The real shocker was the signature crispy baked bbq pork buns. From the moment I bit into the first one five years ago at the original Tim Ho Wan in Hong Kong, this has been my single favorite Chinese dish and which I actively seek out wherever I go. I’ve had many good versions of this item, and while not as good as Hong Kong, the Tim Ho Wan Manhattan version was quite good. However, the Irvine version was not. Too sweet and not terribly flavorful. Now if you had never eaten this kind of bun before, I can see easily how someone would be impressed by these buns. But having become sort of a connoisseur of these items in the past few years, I feel that Irvine’s are not competitive. At $6 for an order of three buns these are pricey to boot–Family Pastry in LA Chinatown has a version that’s at least double the size, at least twice as good, and goes for $1.35.

The brisket with noodles wasn’t bad, just undistinguished and overpriced at $8 for a small bowl.

“Blah!” is probably the best description of the flavor of the har gow. I’m much rather get eight of these for about $3 at Lucky Deli in LA Chinatown than pay $6 for this tiny quartet.  And this photo doesn't convey how tiny these har gow really are.

As with the Manhattan branch, the menu at the Irvine is very short, such that we really had trouble finding a sixth item we wanted to order. We ended up with sticky rice in lotus leaf for almost $7. What we got was sticky rice in lotus leaf and a small amount of meat inside. We wouldn’t have even finished this dish if we didn’t pay so much for it.

Well at least for the price you pay you get good service. Well, not really. With our little table for two and six dishes it was very cluttered. And even as the restaurant was emptying out nobody cleared off our empty plates until we called them over.

Obviously, Tim Ho Wan in Irvine is for somebody, perhaps people who want to say they ate at a restaurant related to a Michelin starred eatery. As I write this review a little before 1:30pm on a weekday, Yelp shows a 15 to 30 minute waiting time. Charitably I guess I’d rate this on a par with mid-tier SGV dim sum restaurants like NBC (before its recent upgrade) and 888, not taking into account price. But if you have other options there’s no reason to come here unless you're desperate for crispy baked pork buns which you can order to go at the check in counter and get your buns in five minutes.
Posted by Chandavkl at 11:14 AM