San Diego and Back--Where's The Cantonese?

As I have pointed out the past few years, Cantonese food has been largely eclipsed in the United States by non-Cantonese regional styles of Chinese food.  This was proven true on last week's trip to San Diego and back, which featured barely a hint of Cantonese food. 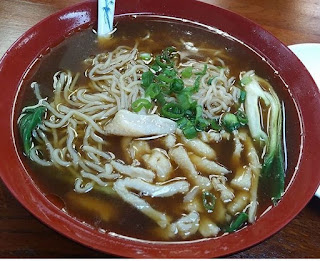 A nice first stopping point was Lake Forest, where of all things I found a dumpling restaurant, Lee's Bao Zi.  Passed on the dumplings, though and had the chicken noodle soup which was quite good.

Arriving in San Diego I made a beeline for Kroran, a Uyghur restaurant.  It wasn't that long ago that you could hardly find a Uyghur restaurant in the United States, and while that's still true there's more of them, and a thought of one in San Diego isn't completely stunning.  I noticed that there are two categories of Uyghur restaurants in the US, one kind operated by Central Asians, the other operated by other nationalities from the larger region such as the Russian operated Kashkar Cafe in Brooklyn..  Kroran appeared to be Turkish operated, though they do have a pretty good selection of Chinese dishes.  I had the lamb manti, the first time I've seen that dish prepared as something looking like a xioalongbao.

My first visit in a few years to San Diego's Convoy St. "Chinatown" took me to the recently opened Steaming Piggy.  I'm still not sure what the name means, but the beef roll there was decent enough. 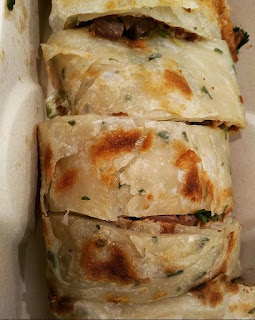 The next day I returned to Convoy St. to Shan Xi Magic Kitchen.  The one thing about these newly arrived regional cuisines is that it's not terribly surprising to find restaurants just as good as the San Gabriel Valley.  These Shanxi noodles with tomato and egg were excellent. 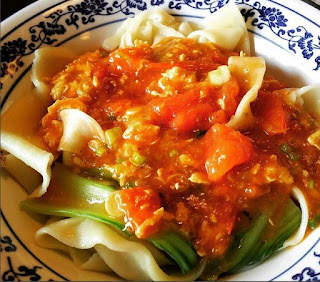 And my last stop in San Diego was my only encounter with Cantonese food at Tasty Bakery.  During my trip to Dubai early this year I was fascinated as to how Chinese food with pork ingredients were replaced across the board with chicken.  Just think--everything at Din Tai Fung in Dubai was made with chicken!  Well one of the delicacies I found and loved in Dubai was steamed bbq chicken buns.  Steamed chicken buns are all over the place in the US but nobody thought about doing bbq chicken.  An internet search turned up only one exemplar in the US--at the student dining hall at UCLA.  A lot of good that would do me.  But then I stumbled into Tasty Bakery on Convoy, and what do I spy--bbq  chicken buns. 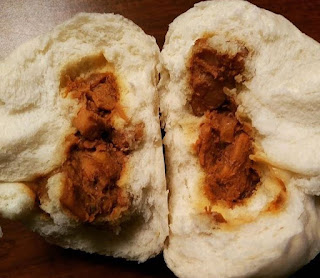 Sadly these buns were awful, not helped by the fact that I came by at night and they had probably been out all day.  But the buns themselves were tasteless, so I wonder if they would have been much better if fresh.  Of course maybe it's better this way since I wouldn't dream about going back to San Diego and getting more.

Last stop on the trip was Laguna Hills.  It wasn't that long ago that the thought of good authentic Chinese food in Laguna Hills would have unbelievable.  But today there it is, Hai Master Kitchen, specializing in Dongbei and Sichuan style food.  And fittingly they had something on the menu I had never seen before, the innocuous sounding corn pancakes.  Well actually I have had corn pancakes at Dongbei restaurants before.  But never something that looks like this. 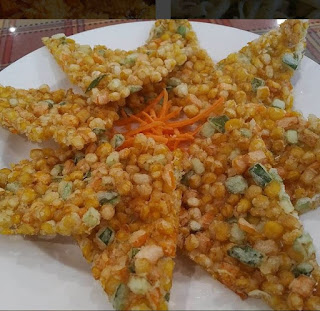 Posted by Chandavkl at 2:59 PM