When I submitted this month's article to the editor, I was puzzled by initial comments I received.  I quickly realized that traveling across the US was so different in the 1950s and 1960s, in a way unimaginable to today's generations.

60 years ago travel was incredibly different.  In 1959 when I took my first airplane flight from LA to Houston, travel by air was a high class activity that you had to dress up.  My parents dressed me up as a spiffy little gentleman, and nobody would be caught dead wearings jeans and tennis shoes on an airplane.  (Oh, and that flight made four intermediate stops before we got to Houston.

Meanwhile, in 1960 when we took our first road trip from LA to SF, we had quite a bit of trouble finding a place to stay as we did not want to stay at a standard hotel.  As to chain motels, there were none in San Francisco.  Holiday Inn, Ramada Inn and Howard Johnson were all founded in the 1950s and none had reached San Francisco in 1959.  We were therefore forced to check out the not particularly plentiful single location motels.  We drove across the Bay area for a while.  I remember stopping at this old and run down place called the Mission Bell Motel in Daly City.  Actually it wasn't a motel as we know it, but rather more like a bunch of motor courts. 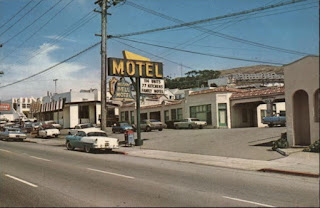 Desperate as we were for a place to stay, we passed on the Mission Bell motel.


We eventually found a newly built, modern motel in Oakland, called the Palms Motel on McArthur Blvd.    It was perfect and that was our base of operations for that first Bay Area trip. 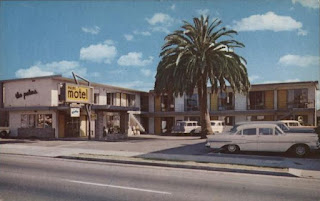 So almost 60 years later I wonder to myself, do you think the Palms Motel is still there?  Well, a quick internet search showed that indeed it is still at its location, with the one minor difference that that area was now Emeryville, not Oakland.   That seemed so neat until I checked on the reviews of the Palms Motel.  $50 per night per couple.  Motel overrun with prostitutes and the stench of urine permeates the property.  Oh well, at least I have my fond memories of that motel and that trip.  And I was able to explain to the editor why the opening of motels in San Francisco and Los Angeles Chinatowns was such a big deal.

Posted by Chandavkl at 7:28 PM