Opal In The San Gabriel Sheraton: Less Than Meets The Eye

I have been hearing a lot of buzz about the new high end Cantonese restaurant in the San Gabriel Sheraton, Opal.  Based on newspaper reviews, online reviews, and other brief passing internet references, it sounded like this could be the transcendent high end Cantonese restaurant that has been missing in Los Angeles.   Unfortunately I didn't know anyone who had actually eaten there and made critical comments, so I had to go there with a group so we could see for ourselves.

Before going any further I need to make one major caveat.  Some of the restaurant's signature dishes require 24 hour advanced notice, and we were essentially walk-ins.  Consequently we missed the $75 Peking duck, the $38 a bowl bird's nest soup, and some other specialties.  So it's quite possible that we missed the dishes that may well distinguish Opal from every other Cantonese place in town.

That having been said, I have to say Opal was a bit of a letdown.  No criticism of the decor or the service, which was top notch.  But the food fell short, putting aside the price tag on some of the items.  Opening dish was double boiled chicken broth, which necessitated a $10 per bowl charge since they probably boil a whole chicken all day to get a bowl of soup.  One reviewer thought this was a highlight dish based on its relatively scarcity on local menus.  But it certainly wasn't any better than the version you can get at Broth, the Taiwanese chicken essence restaurant in Walnut, and you'd expect a better tasting brew at a place like this. 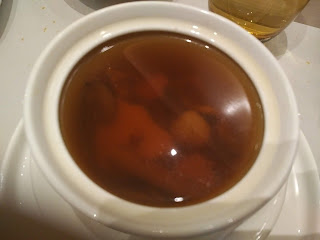 Wildflower honey glazed kurobota pork sounds like something special, but it was just merely a pretty good version of char siu. 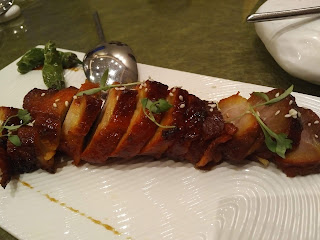 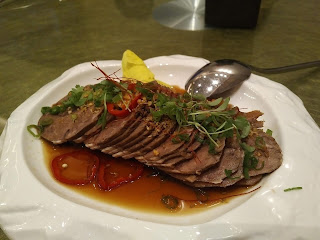 Moving onto the main dishes, perhaps the biggest internet favorite was the E-fu noodle with lobster.  A nice dish, but certainly not better than Newport Seafood, 626 Lobster or Longo Seafood versions. 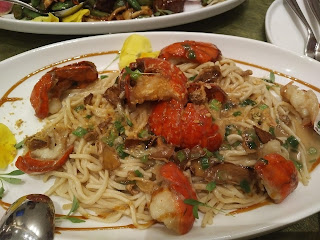 Also highly regarded by online reviewers was the seared Chilean sea bass.  Again, a nice dish and very nicely presented, but not even at the level of Koi Palace's honey glazed sea bass. 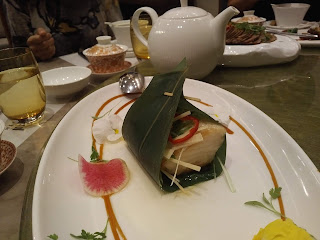 The surprise of the evening was the garlic chili chicken.  A real winner with a fantastic sauce.  If everything else were this good I'd be a happy camper. 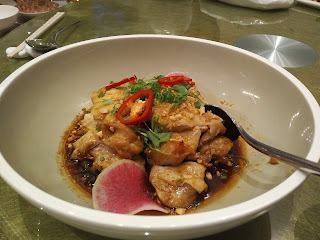 Online reviews were also highly complimentary of the filet mignon steak with snap peas.  Again, quite good but no better than a large number of restaurants in the San Gabriel Valley. 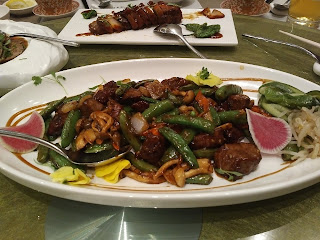 Last on the menu was the poached snow pea leaves with egg white and crab meat.  Not my favorite preparation of this vegetable, though probably better than I've had elsewhere. 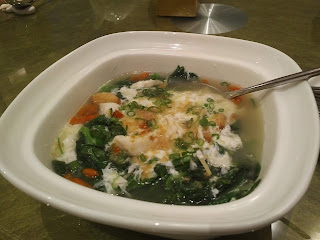 Some commentators went so far as to describe Opal as a world class eatery, comparable to what you would find in Asia.  Again, maybe it is based on their premium dishes.  But if it really were, you'd expect the more mundane dishes to be better than they were.

Posted by Chandavkl at 7:56 PM