The Playground In Santa Ana Is A Wonderland Of Food Variety

I don't get down to Orange County particularly often, particularly since the driving time to get there has expanded so much over the decades.  Consequently, except for the Chinese restaurants in Irvine, I have little exposure to any restaurants in the area.  In this regard a last minute visit to The Playground in Santa Ana was a revelation on multiple levels.

The Playground is the first restaurant I've been to that has such an extensive menu that changes every day, with the menu reflecting what ingredients are available that particular day in multiple categories, including meat, seafood, pasta, vegetables and so on.  At one time, getting a reservation at this restaurant was quite a challenge, but since a massive expansion was completed, there's now room for everybody.   You would think that with the volume of customers they have, plus a perpetually changing menu, that there would be quality issues, but everything we ate was superior, with each dish having its own distinctive taste. 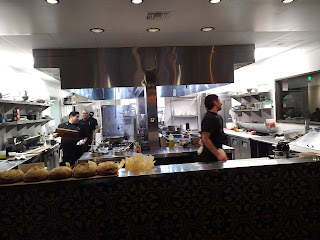 The meal started out with roasted cauliflower, as good as any version of cauliflower I've had (picture, unfortunately did not come out), along with a fig plate that was scrumptious. 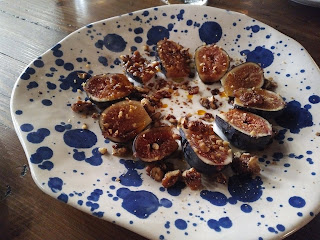 Obviously the number of choices within each category is limited.  For example there were four pasta dishes listed.  The radiatori with pork was excellent. 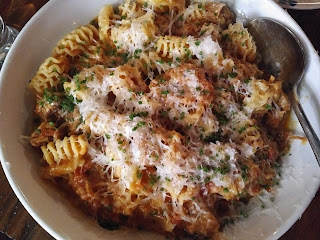 From the meat section, the duck with farro was a real winner.  I actually liked the farro better, but that doesn't mean that the duck wasn't outstanding.  Rather is shows what a good job The Playground does with its accompanying sauces. 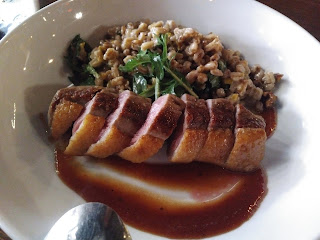 There are perhaps a handful of permanent items on the menu, and the signature item is the maple glazed pork chop, a slab of four chops that will give you a completely different perspective on pork chops. 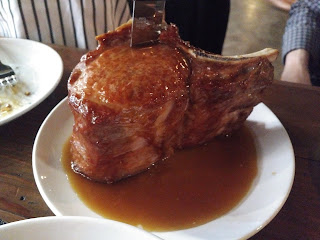 The last entree we had was problem the least outstanding dish of all, the crispy sea bass.  But even here the tastes of the crispy fish skin, and the citrus flavored bread crumbs were memorable. 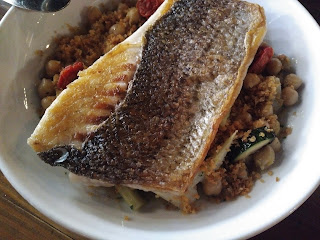 For dessert there was toffee pudding. 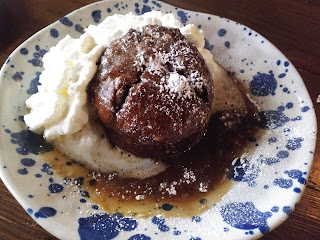 Roughly a year later we also tried the following dishes starting with the tempura asparagus which was quite good and makes you wonder why others haven't tried it. 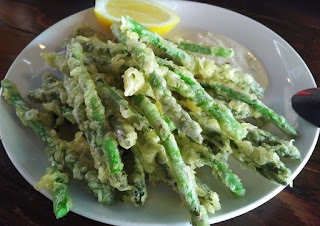 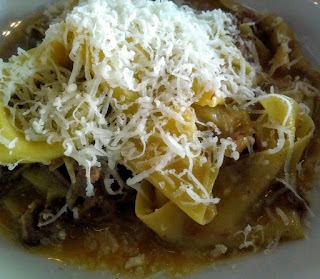 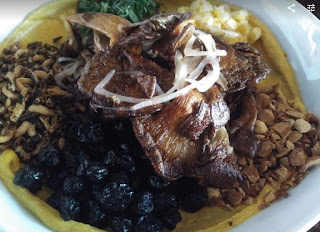 A different kind of pork chop--this time with maple glazing. 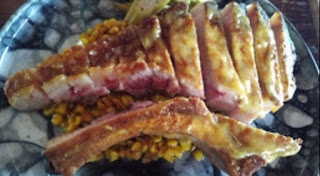 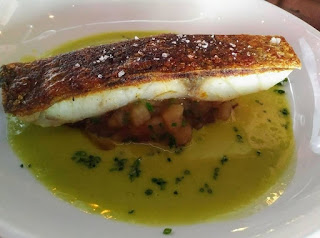 The Playground was remarkable for the combination of flavors and the unimaginable playbook when taking into account the daily changes.   Where else, besides a Chinese restaurant with a menu of 300 menus, could you regularly go back and not eat the same dish twice?  There were so many other items on the menu that we would have loved to try.  It was also interesting to see a restaurant that clearly falls into the "casual" category serve such high quality food at about $30 per person.