A few weeks before Tim Ho Wan announced they would be opening up in Irvine, the Mainland Chinese dumpling chain J A Jiaozi Authentic actually opened up in Irvine, in the Irvine Marketplace.  And unlike the disaster that is the Mainland Chinese Yang's Braised Chicken Rice chain in nearby Tustin J A Jiaozi seems to be doing it right, so right that you probably wouldn't suspect they're from the Mainland.  For one thing, the premises are a complete surprise--one would expect an operation more like Yang's Braised Chicken Rice hole-in-the-wall, strip mall, type of enterprise.  Instead this is a tasteful, hipster like restaurant in the classy Irvine Marketplace, complete with a Din Tai Fung type of glass kitchen where you can spy the dumpling makers at work 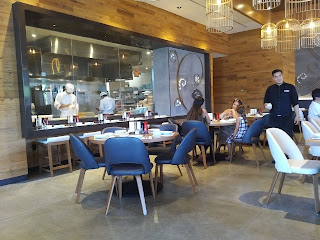 Dumplings are only a small part of the menu.  The dumplings are a little bit different from what we're used to, smaller and more delicate from what is normally seen in the Los Angeles area, like these fish dumplings, though still quite good. 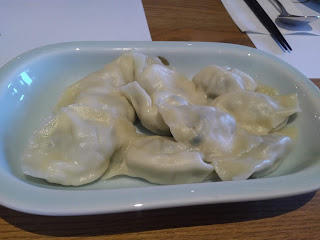 Another part of the menu has dumplings in broth, with cod and shrimp versions.  Based on that description, one would think this would be a xiao long bao type of dumpling with broth inside, but in fact it means the broth (more of a gravy) is outside of the dumpling.  This is the shrimp dumpling with shrimp broth. 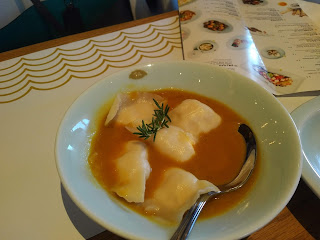 Some of the dishes are also surprisingly fusion-y for a Mainland Chinese restaurant, such as quinoa fried rice, quinoa mushroom rolls, cactus with plum sauce and pictured below, chicken fried rice with bonito flakes. 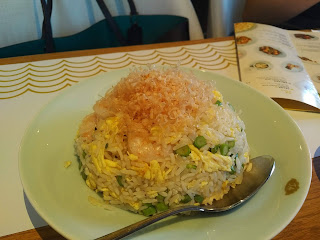 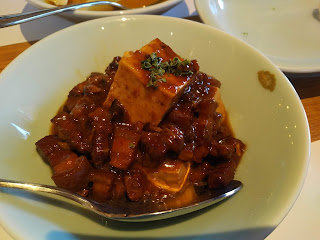 Not surprisingly, as a Mainland restaurant there are some spicy dishes, like the spicy cold chicken noodle salad. 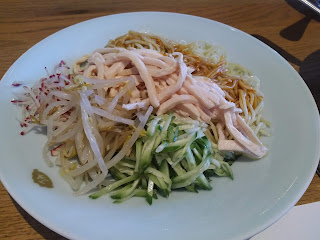 What was surprising was the dessert selection, all made in house.  The Italian ice cream with hawthorn syrup was a real winner, especially for those of us who grew up eating haw flake candy. 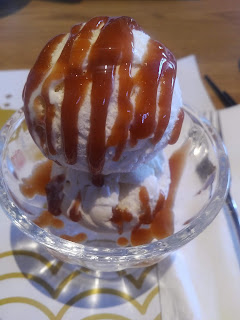 And here is the Imperial Court yogurt, described by the manager as being made in-house with condensed milk, paired with another view of the haw syrup ice cream. 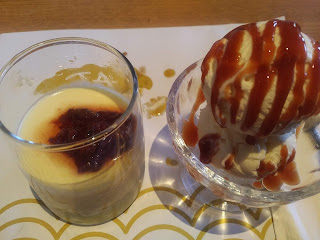 To conclude with my prior theme, J A Jiaozi Authentic is a surprise on many levels--not just the decor, but a high quality of food with an understanding of concepts of creativity and fusion one would not expect from a pioneering Mainland Chinese foray into the US Chinese dumpling market.  Portion sizes are small which makes the food pricey which will turn off some customers.  On the other hand the mostly Chinese clientele doesn't seem to be deterred by this.  And for the first time I can say that there's a Chinese restaurant that reminds me of Din Tai Fung.
Posted by Chandavkl at 9:20 PM