My Favorite Chinese Dishes Over The Years

While thinking about my favorite current Chinese dishes, my thoughts turned to my previous favorite Chinese dishes over the decades.  Besides finding this exercise to be an interesting one, it turned out to say a lot about how Chinese food in the United States has evolved over the years. as well as how my own tastes have changed .

As I have mentioned in my articles, interviews and presentations, I did not eat much Chinese food as a little boy growing up in 1950s Los Angeles.  First of all, the Chinese food of the day, essentially dishes imported by rural Toishanese immigrants from southern China, wasn't particularly good.  Furthermore, the homestyle version of that food was even worse.  Even though my dad was American born, culinary wise my mom described him as a "China Jack" so she cooked nothing but Chinese dishes for him.   In my opinion this homestyle Toishanese food was gross--things like steamed eggs with ground pork, which my mom cooked and served in a large glass vessel, ox tail, pig feet in tomato sauce, bean thread in a horrid milky sauce, and preserved turnip strips with ground pork, the thought of which made me nauseous.  There was only one Chinese dish that I enjoyed eating--rice with soy sauce.  And even when we went to multicourse Chinese banquets at places like Lime House (in the old Spring Street Chinese district, before it merged into the rest of Chinatown), the only thing I ate was rice with soy sauce.  (The only dish that I consumed more than rice with soy sauce was spaghetti with soy sauce.)

My culinary horizons expanded just a little bit in the early 1960s when I started to spend my summer vacations at my grandfather's small grocery store on 24th St. near Ellendale Pl. just a bit north of the USC campus.  My grandfather was an excellent cook, learning his trade at the Beverly Hills Hotel in the 1920s at a time where that hotel was a resort destination for Easterners on the far outskirts of Los Angeles, and was staffed largely by Chinese laborers.  In the back quarters of the store, he would fry up these giant chow mein pancakes made from what we called "Chinese water noodles", the eggless fresh Chinese noodle of the day.  The fried noodle pancake was intended to be cut up  into squares and doused with sauce, but I was content to eat the whole thing, without any topping.

The late 1960s saw the first real modernization of Cantonese food in Los Angeles with the first Hong Kong influences appearing in our Chinese restaurants.  The first restaurant of this ilk to open up in the City Produce Market neighborhood where my dad worked was On Luck Restaurant, founded by George Cheng, whose family owned Hong Kong Noodle Co., the Los Angeles contender that claimed to have invented the fortune cookie. (Another purveyor in San Francisco claimed the same honor, and in a kangaroo mythical court in San Francisco, the San Franciscans were ruled the true inventors.) Meanwhile, I was developing a reaction to highly fried foods, so Mr. Cheng concocted friendlier versions of his dishes for me, tomato beef lo mein instead of chow mein, and duck juice "fried" rice, instead of fried rice actually fried in oil.   (Mr. Cheng also asked if I wanted to pen some fortune cookie fortunes for him, but I was a busy college student and declined the invitation.)

My graduation from law school in 1973 and entering the workforce triggered my fried rice period, which may sound almost silly now, but back then was a critical element propelling my lifelong quest to eat at Chinese restaurants.   Having been largely confined to California until then, I had a desire to explore the United States and started a series of fly and drive vacations.  Meanwhile, I developed a keen interest in Chinese American communities when taking pioneering ethnic studies classes at UCLA.  And I wanted to spend time exploring and not waste time looking for three square meals on these trips.  So rolling all these objectives together I found that taking most of my meals at Chinese restaurants, topped by a gigantic dinner, was a way to fill my daily food quotient for an economical price and interact with Chinese communities around the country.  In most of the places I visited, however, authentic Chinese food was unheard of, so I ended up eating lots of fried rice and chow mein, such that for a while I became a connoisseur of fried rice.  (The one exception to inauthentic Chinese food on the road--Kim's Restaurant in Clarksdale, Mississippi, which introduced me to Hong Kong style chow mein in the mid-1970s.)

The real modern era in Chinese food in the United States started in the mid to late 1970s with the explosion of Hong Kong style Cantonese cuisine, and particularly in the early 1980s with the opening of Chinese seafood restaurants and dim sum palaces. with a wide variety of new dishes we now take for granted from chow mein made with thin Hong Kong egg noodles, to new varieties of dim sum like cheung fun (rice noodle rolls) and baked bbq pork buns.  The quintessential seafood/dim sum restaurant of this era was ABC Seafood, which opened in LA Chinatown in 1984 at the former Lime House site.  But interestingly their signature dish was neither seafood nor dim sum.  Rather it was a heavenly version of lemon chicken with an incredible combination of perfectly cooked lightly battered chicken cut into strips with a lemon sauce having the right combination of tang and sweetness.  For 15 years until the cook retired, I and everyone else that we knew made frequent regular pilgrimages for ABC's magical lemon chicken.

When the owner/cook of ABC Seafood moved on, I needed a new favorite Chinese dish which turned out to be Shanghai style rice cakes.  While Chinese food in the US started evolving after the late 1960s immigration reform, the new food was still predominantly Cantonese, with a healthy dose of Taiwanese influence thrown in.  It wasn't until the late 1980s that other regional Chinese cuisines appeared in Los Angeles, largely starting with Shanghai style food, and expanding my world beyond Cantonese food.  And the great thing about rice cakes was that you could cook a version at home that was just as good as what the restaurants served.

Rice cakes were then replaced as my favorite Chinese dish by fish dumplings, which I first encountered about 15 years ago at Dumpling 10053 Restaurant in El Monte.  The 21st century is definitely dominated by non-Cantonese regional Chinese food and while there were random Chinese dumpling restaurant openings in the Los Angeles area going back to the late 1980s, the early 21st century marks the start of their proliferation.  Interestingly, for many years, fish dumplings were unheard of everywhere in the United States outside of Los Angeles.  As recently as 5 years ago, I was being interviewed in New York by South China Morning Post correspondent Jeff Chu.  He asked me what my favorite Chinese dish was and when I responded fish dumplings, I was met by a puzzled look.  He had never heard of fish dumplings because they didn't exist in New York at that time.  It wasn't until just two or three years ago, that fish dumplings showed up in New York.

But for the past five years my favorite Chinese dish has been the crispy baked bbq pork bun, generally made with both a crispy round top and a crispy flat bottom.  I first encountered a variation of this item at Sea Harbour Restaurant in Rosemead, with what they called their French style baked BBQ pork bun which was absolutely fantastic.  (And I don't know why they subsequently took it off their menu, only reinstating it quite recently.)  Four years ago in Hong Kong we went to Tim Ho Wan, the restaurant that invented the dish, where I had their transcendental version of that item.  And ever since, even knowing that nobody in the United States can equal Tim Ho Wan Hong Kong,'s version I have been on a quest for this item.  My favorite version over here is Dragon Beaux in San Francisco, followed by Bay Area restaurants Hong Kong Lounge, Hong Kong Lounge 2 and Lai Hong Lounge.  (Unfortunately Koi Palace was out when I went there.)  Honorable mention to Pacific Lighthouse in Alameda.  Decent versions at Tim Ho Wan in Manhattan, Lunasia in Alhambra, China Red in Arcadia and surprisingly, for $1.25 for a giant one, at iCafe on Waverly Place in San Francisco Chinatown.   Golden Valley in Rowland Heights was OK before they closed down.  Bao by the Beverly Center was bad and it wasn't even crispy, even though they offer "crispy" and regular baked bbq pork buns. 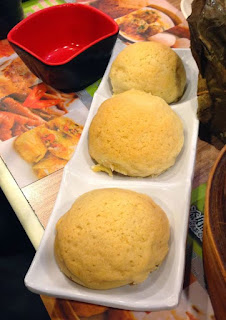 Posted by Chandavkl at 9:57 PM