The Taste of Sichuan Peppercorns Comes To Downtown Los Angeles

As I’ve noted before, Los Angeles Chinatown is the only Chinese community in the United States that lacks an authentic Sichuan dining option.  (For those who may point out Washington D.C. Chinatown has having a similar lack of Sichuan style food, I would point out that there are so few remaining Chinese living in the area that it doesn't qualify as a Chinese community.)  And with the proximity of Los Angeles Chinatown to the downtown core, there are not very many Chinese restaurants to be found in downtown Los Angeles itself.   Indeed, the only downtown restaurant serving authentic Chinese fare is Peking Tavern, the dumpling and Beijing style food specialist, though Triple 8 restaurant by L.A. Live does have some authentic items on its menu.  Consequently anybody looking for true Sichuan food in or near downtown Los Angeles has been out of luck.


All of this makes the recent opening of Li Orient, operated by the owners of Triple 8, midway up the US Bank Tower downtown ,rather significant.  (You may remember the US Bank Tower as originally being called the Library Tower, since air rights from the downtown Los Angeles public library were purchased to enable the addition of some of its floors.  President George W. Bush subsequently referred to the building as Liberty Tower in describing how Al Qaida had plotted an attack on the building shortly after 9/11, understandably not realizing that a skyscraper could be connected to a library.)


Li Orient is not a dedicated Sichuan style restaurant, but rather features various types of Americanized, as well as authentic regional Chinese foods.  Yes, it does have a Panda Express type takeout section for the locals, as well as orange chicken, egg drop soup, broccoli beef, walnut shrimp, garlic kale and kung pao chicken,.  But it does have a good selection of authentic Chinese dishes, too.  These include stir fried lobster balls with XO sauce, Hainan chicken, honey glazed char shiu, various types of dim sum, minced duck lettuce wraps, jellyfish, and Peking duck.

Then there is the Chinese breakfast served from 7:30am to 10:30am, featuring jian bing (filled Chinese crepes), egg and cucumber pancakes, soymilk and Chinese crullers and varieties of congee.  But the big news is the handful of Sichuan style dishes including Szechwan spicy beef, Szechwan spicy fish, numbing cold chicken, Szechwan cold noodles and Szechwan spicy noodles. This is real Sichuan peppercorn action, not watered down stuff for downtown office workers.   Not surprisingly, most of the diners in the sit down portion of the restaurant appeared to be Chinese.

Li Orient also has its fusion side, particularly with the rainbow array of seven different types of colored xiaolongbao, with each color having a different filling.  Yellow is for spicy chicken, red is for shrimp, green is for tofu/pork, white is for crab, orange is for chicken and cheese, black is for squid and brown is for truffle and chicken.

Li Orient is kind of pricey, though, with entrees starting at $18. The spicy fish dish below, as well as the spicy beef are $20 items, while the Zha Jiang Mein is $15, certainly well above the price point for the comparable items in the San Gabriel Valley.  And don't expect San Gabriel Valley quality food here, just as you don't expect to find that quality of food in Los Angeles Chinatown.  But it provides an alternative that has been missing from this part of town.

The premises are tastefully decorated with a spacious open feeling. 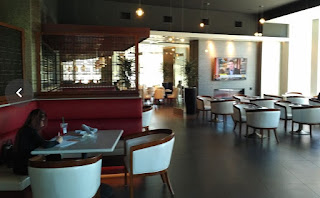 The bar era is the highlight of the interior. 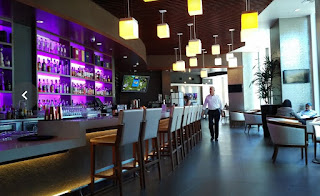 Interestingly the restaurant is closed from 10:30am to 11:00am as they transition from breakfast to lunch.
Posted by Chandavkl at 9:56 PM