When I first heard that a number of large chain hotels would be opening up in the San Gabriel Valley, I was anticipating some interesting additions to the local Chinese dining stock.  After all, when the San Gabriel Hilton opened up a dozen years ago, the adjacent new shopping center filled up with numerous stripes of Chinese restaurants, the hotel restaurant hosted a weekend buffet that I still sometimes dream about today, and their banquet kitchen became one of the top Chinese banquet venues in the Los Angeles area.  However, with the opening of the first two of these next generation hotels, the San Gabriel Sheraton and the Hilton Garden Inn turned Holiday Inn in El Monte, it appears that the impact on the local Chinese restaurant scene will be modest.  Where I had envisioned multiple Chinese eateries in each of these new hotels, so far it's just one Chinese restaurant in each hotel.

I didn't even realize that Tasty Dining had opened in the Holiday Inn in El Monte last fall, probably because I had no idea that the hotel had changed brands from Hilton to Holiday Inn even before the hotel opened, and I was still searching for information on the new Hilton Garden Inn in El Monte, which didn't exist.   Tasty Dining is certainly an interesting choice for the Holiday Inn's only restaurant, as it's a relatively small operation whose existing location is in one of Valley Blvd.'s many shopping malls, and who is best known for being the LA area's first Wuhan style food specialist.  Indeed, they are certainly proud of the honor, as their business card proclaims this to be the "Tasty Dining Flagship Store in El Monte" (Indeed as a native Angelino who historically associated El Monte with the El Monte Legion Stadium, and Latino rock, I never dreamt I'd see the words "El Monte" and "Flagship" used together.) 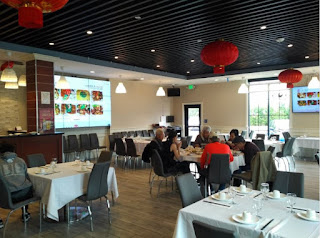 The Holiday Inn Tasty Dining menu is quite similar to that of its original location, with one concession to its location in a branded hotel being one small section on the menu of non-Chinese dishes.  While this hotel was obviously built for Chinese clientele, the Holiday Inn and other international branded hotel will surely attract some percentage of non-Chinese guests, and hotels always have to accommodate the dining needs of all its guests.  Indeed, if you look at the El Monte Holiday Inn website, there's no indication that their intended audience is Chinese guests, so in that regard I'm surprised there aren't more Western food options on the Tasty Dining menu.  One interesting thing about Tasty Dining is that in addition to the main dining room, there is an adjoining annex which also serves as the breakfast buffet area for hotel guests.  The breakfast buffet is a common amenity at Holiday Inns all over the country.  This annex also becomes an overflow dining area for Tasty Dining during their hours of lunch and dinner service.   Interestingly the breakfast buffet hours are included in the Yelp listing and the hotel's listing of Tasty Dining's hours of operation, even though Holiday Inn breakfast buffets typically are continental breakfast, and I did spy yogurt cups in the refrigerator.

Next to open earlier this year was the San Gabriel Sheraton, and once again the Chinese dining runs one deep.  The Sheraton houses just two restaurants, the first to open being a steak house called EST.Prime Steakhouse.  This is a safe choice for both Chinese and non-Chinese hotel guests alike.  The second restaurant is Ba Shu Feng, the first US branch of a noted Sichuan restaurant chain from China.  The restaurant's expansive dining room is richly appointed, and makes one wonder whether this will be the first non-Cantonese Chinese banquet facility in Los Angeles.  An interesting sidelight to the Sheraton is its widespread use of robots to perform various tasks.  For example, when I checked the hotel directory kiosk to find exactly where Ba Shu Feng was located, the directory display asked me whether I wanted it to take me there.  Which I did.  (The display in the picture below says "Great.  Please follow me.") 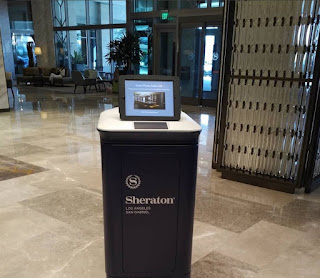