As I have quoted Chinese restaurant maven Robert Lu on a number of occasions, those of you who complain how you have to drive all the way to San Gabriel to get the best Chinese will fondly look back at those days because the locus of Chinese food in the Los Angeles is moving much further to the east.  (His statement was not a prediction--it was a statement of fact, as he has inside information.)

With the opening of XLB Dumpling Bar in Walnut I think maybe that perhaps the future is now.  XLB Dumpling Bar is a fast casual restaurant (order at the counter, then take your food to communal tables) that opened a few weeks ago and is still in soft opening with a limited menu.  However one thing is already perfectly clear--the restaurant size is much too small for the business they're generating, with every seat taken before noontime on a Sunday and a long line of customers waiting to order.  And this is in Walnut (look that up on your map if you don't where that is), not particularly close to any freeway.

Signature dish is the xiaolongbao and the version here is excellent.  Probably wouldn't win a blind taste test against Din Tai Fung, but it is totally juicy. 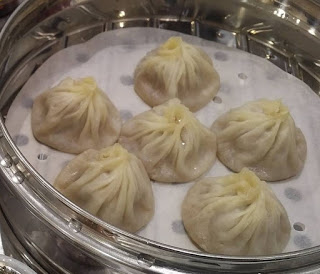 This is the Dan Dan noodles in a spicy peanut sauce. 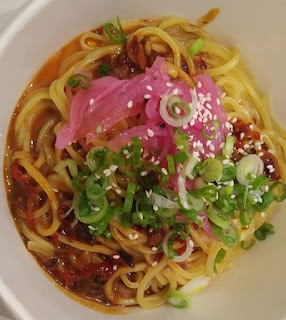 Pork and shrimp dumplings with bean sprouts and cabbage on the side. 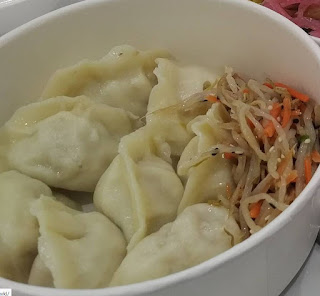 Braised chicken noodles was a nonspicy contrast to the Dan Dan noodles. 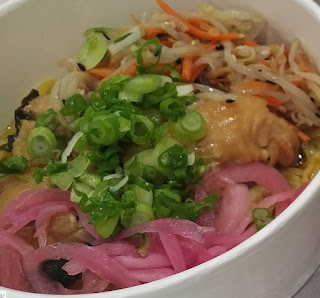 The big disappointment was the fact that they were out of their cheeseburger bao.  Even though we arrived 20 minutes after opening, all 38 orders had been sold.  They felt sorry for us when I told them we had driven 35 miles just to try their restaurant, so they comped us a small appetizer and three soy drinks. (We didn’t try any of their prepared drinks but the staff highly recommended their Grapefruit Galaxy.)   Interestingly from this internet photo, the cheeseburger bao looks surprisingly ordinary from the outside. 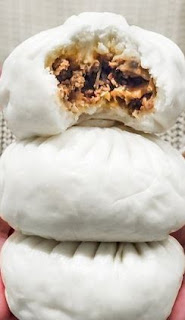 XLB Dumpling Bar was a total madhouse with every seat taken and people streaming in and out.  Service was slow, probably taking 10 to 15 minutes for each order to be prepared, compounding what looks like an undersized restaurant.  But they're clearly onto something here.  As I have written in the past, Chinese food continues to evolve with new and better dishes arising all the time, and generally is introduced by new entrants to the market.   Those who follow the opening of new Chinese restaurants know that most of the new entrants these days are in what has been called the East San Gabriel Valley (Rowland Heights, Industry, Hacienda Heights, though I don't know if these communities are actually part of the San Gabriel Valley).  And now things are moving even further away to places like Walnut, Diamond Bar and Chino Hills, so even people who live in the West San Gabriel Valley are having to start driving out for Chinese food.
Posted by Chandavkl at 8:34 PM