A Cantonese Blast From The Past

Besides returning to favorite restaurants, repeat visits may be triggered in other situations.  For example we just had a family reunion of my aunts and uncles and cousins, all American born Chinese born in the 1920's and later, at Golden Pheasant in Torrance.  I had eaten in that restaurant in 1982, back when the restaurant was owned by Michelle Kwan's family.  I can't say I remember anything about eating there except while not up to the food in the burgeoning San Gabriel Valley it was fairly decent at that time.  I never went back since a lot more and better Chinese restaurants started opening up in the Lomita and Torrance area in subsequent years.

Since by now, Golden Pheasant had also fallen into my rule about not eating in Chinese restaurants that have been open more than 20 years, I was not especially looking forward to the culinary portion of the reunion. Indeed I was expecting mostly Americanized fare with a sprinkling of borderline authentic old Cantonese food.  And I was expecting a moribund, half occupied facility.  But to my surprise the restaurant was full with people waiting to get in, virtually all Asians.  Once the meal began I saw what the attraction was.  Golden Pheasant serves authentic 1980s Cantonese food that you don't see much anymore, at least not if you're used to eating in the San Gabriel Valley.

The first dish was the old 1980s favorite, walnut shrimp with mayonnaise. 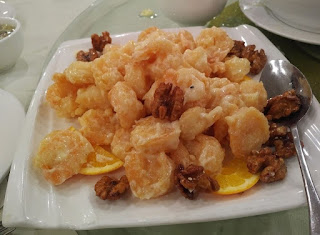 Next was chicken in curry sauce. 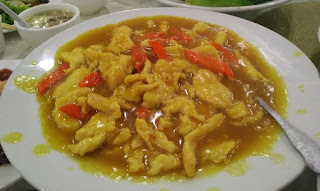 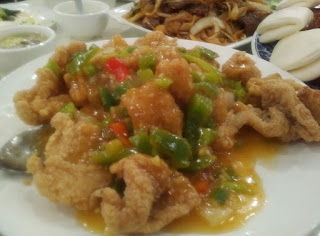 Other dishes included beef chow fun, Peking duck, Westlake beef soup, vegetable chow mein, spicy string beans and mixed vegetables, while the house dessert of tapioca in coconut milk was many times better than the traditional red bean soup you get at most San Gabriel Valley Cantonese restaurants.  While I would rate the meal only as passable, I could see where old line traditionalists would find Golden Pheasant quite attractive.  One last point is that when our gathering finally broke up before 3pm the restaurant was still packed.  Except that most of the patrons were now non-Asians, with a large representation of Hispanic diners.  (And a brief conversation turned up the fact that one of the diners had driven up from Mission Viejo based on what she had heard about the restaurant.)

Posted by Chandavkl at 9:47 PM