Where's The Mainland Chinese Food Near The USC Campus?

As I have written both for Menuism and LA Weekly, one of the most significant trends in Chinese dining in the United States in the past decade is the appearance of authentic Chinese food nearby college campuses all over the country to serve the culinary needs of the 300,000 students from Mainland China studying at our universities.   The current generation of international Chinese students is different from past generations due to their wealth, as well as the high likelihood of returning to China when their American university days are over.  As a result authentic non-Cantonese Chinese restaurants have popped up everywhere there's a university with any concentration of students from China. Even where two years ago there was a paucity of authentic Chinese options near UCLA, as my LA Weekly article described, suddenly there are a plethora of choices there.   But even though the University of Southern California has the second largest enrollment of students from China among American universities, numbering around 5,000, restaurants serving authentic Chinese food for these Mainlanders near campus appeared to be nearly non-existent.

Now it's not like there's never been somewhat authentic Chinese food near the USC campus.  Some 30 years ago there was Campus Chinese Restaurant on Vermont Ave. that made a terrific pepper chow mein, but it fell to the 1992 Los Angeles riots.  More recently there was Bamboo Express in the University Village mall which served authentic Western Chinese food alongside its Panda Express type items,  but which closed down when that shopping center fell to the wrecking ball.  Interestingly, the owners then opened up Qin West restaurant in Chinatown and then another branch on Westwood Blvd., bringing the first authentic "Mainland" Chinese food to both Chinatown and the Westside.  Then there was the Shan'xi Food Truck that haunted the USC campus that did so well it morphed into the sit down House of Bao restaurant, the second authentic Mainland style Chinese restaurant in Los Angeles Chinatown.  However that restaurant folded after just a few months, and I don't know if the truck operation ever came back.  Likewise I presume the Bamboo Wheel Shanghai style truck went out of business when the associated Bamboo Creek Restaurant in Monterey Park closed down.

I had heard hints that there were various Chinese food trucks currently parked around the USC campus.  However, driving by Jefferson near McClintock by international student housing, I only spotted one Chinese food truck, Tasty Wok and three taco trucks, including trucks named Tacos Guadalajara and Fluffy Tacos.  I also drove by the various small shopping centers on Figueroa St., but only saw the places that have been there for many years.   Well, the popcorn chicken at A Cup of Joy on Figueroa would have to do for authentic Chinese food, I guess, plus the on campus Asian food court at Fertitta Hall for the non-international students.

Still that answer didn't set well with me, so I turned to the good people at the Food Talk Central message board to ask where USC's Mainland Chinese students went to satisfy their Chinese food needs.  And they came through as I hoped.  The answer is a two part one.  Initially most of the responses indicated that a lot of the Mainland Chinese students at USC live away from campus, in luxury downtown LA apartments, or perhaps in San Gabriel Valley mansions.  That would explain the lack of authentic Chinese restaurant options that are otherwise common in campus communities from Champaign IL (which has at least 10 authentic Chinese restaurants for the large contingent of overseas Chinese students), Manhattan KS, Athens (Winterville) GA, Fayetteville, AR and probably hundreds of other university towns across America.

But even if a lot of the Mainland Chinese students left campus at night, they had to eat somewhere during the day.  And certainly not all of them lived away from campus.  Since today's Mainland Chinese students are much less inclined to widen their culinary horizons than prior generations of foreign students from Hong Kong and Taiwan, where did they get their Mainland food fix?  The real answer to the question of where USC's Mainland Chinese students go to get their Chinese food was eventually provided on the Food Talk Central message board by the indubitable food writer Dommy Gonzalez (also known as Dommy!) who lives in the USC area and who explained that what looked like taco trucks parked around Jefferson and McClintock were actually Chinese food trucks that didn't bother to change their names.

So going back on foot to Jefferson and McClintock confirmed that it's all true. All four trucks served Chinese food. The truck that said Tacos Guadelajara when I drove by on the street, said J. C. Foods on the street side and was festooned with Chinese lettering, as were all the trucks.  Fluffy Tacos didn't bother giving itself another name and I don't know if G & G Express Foods renamed itself from something else or not. 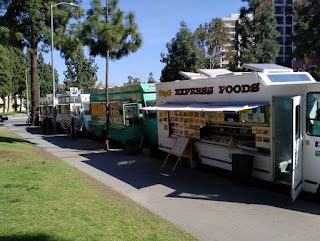 Each truck had a "menu" in the form of probably 40 to 50 pictures of their dishes that they served, almost exclusively Mainland style dishes, plastered on the side of the truck.  Prices were reasonable, with most dishes under $10, some including combos with rice and soup.  I was surprised to see an apparent nod to healthier ingredients here in California, as I ordered ground chicken wonton soup from one truck (can't recall seeing that anywhere) and a popcorn chicken roll (similar to the ubiquitous Shandong beef roll) at another.  But most of all, it was great to learn that even at USC there are authentic Chinese food options for the Mainland Chinese students at these and other Chinese food trucks in the area.

Posted by Chandavkl at 7:30 PM