What New York Chinese Dining Has That Los Angeles Doesn't

La Chine in the Chinese-owned Waldorf-Astoria Hotel is the type of high end, authentic Chinese restaurant that exists in New York, along with places like Fung Tu, Cafe China and Hakkasan, but no longer can be found in LA after the demise of Hakkasan Beverly Hills (and perhaps Chi Lin). My guess is that Los Angeles is just not much of an expense account town like New York is. Yes, LA does have the entertainment industry, but that pales compared to New York which has Wall Street and the investment banks, and large numbers of corporate headquarters that LA doesn’t have.  We did pass on the $125 per person tasting menu, but got a good substitute with the restaurant week special. We had the Long Island fluke appetizer, which was OK, the wagyu beef tenderloin (the hit of the evening)   the crispy shrimp, which was quite tasty, the black cod, also OK.  For dessert there was the mango with pomelo tapioca soup (pictured below), which was excellent, and the coconut pudding square, which was meh.

On a side note, the high end authentic Chinese dining scene in Los Angeles is entirely different than New York as LA can only support a handful of inauthentic high end Chinese restaurants like WP24, Mr. Chow and Philippes.  So the $64 question is with Chinese culture being so food centric, and so much Chinese money circulating around Los Angeles, where do the rich people go to eat Chinese food?  At least up to this point, it's not in dedicated fine dining restaurants, but rather the same places where you and I eat.  Virtually all of the seafood palaces where we go for $3 dim sum, lunch specials, and regular dining, also serve uberexpensive, largely seafood based premium menus, probably topped by the $10,000 per table banquet menu at Grand Harbor in Temple City. 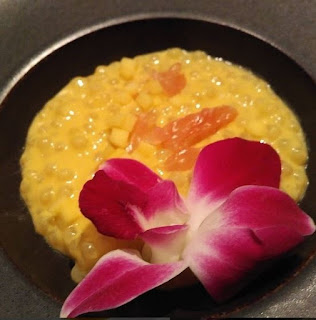 Walking near my hotel on 45th St. in Midtown Manhattan I passed a restaurant called Modern Szechuan, which featured a $6.99 per pound buffet, and had all the earmarks of a restaurant catering to local office workers.  But what caught my eye was hand written signs touting things like Lanzhou hand pulled noodles and xiaolongbao—certainly not Midtown office worker fare.   Walking into the front part of the restaurant where most of the tables were located, I saw a couple of lo wai eating and a couple more carrying out buffet items.  The menu was largely Americanized Chinese food and all in all this place really didn't look too promising.  But there was a section of the menu with knife cut and hand pulled noodle soups which looked authentic, so I ordered the chicken hand pulled noodles and the Shanghai wonton.  After I placed my order with the manager she directed me to the back of the restaurant, past the buffet, to pay for my food and to wait for it to be brought out. What a shock. Most of the people eating adjacent to the buffet were old Chinese guys like the old time Chinese bachelors you see in Chinatown.  In Midtown?  And reaching the back part of the restaurant, there was a separate menu of authentic Chinese items posted on the wall (ironically, nothing Sichuan style), and the seating area in the back area was filled mostly with young Chinese families.  Who knew?  It was like a hole in the wall restaurant had been transplanted from Chinatown into the heart of Midtown Manhattan!

The chicken and the noodles were fantastic, as were the Shanghai wontons made of ground beef. We even ordered a second bowl of chicken noodle soup.  And you'd never see a restaurant like this in downtown Los Angeles. 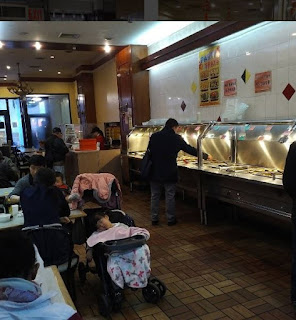 As I have previously written, Flushing has become my favorite Chinatown because unlike the Chinatowns in San Francisco, Los Angeles, and even most of Manhattan, the sidewalks don't roll up after the dark and there is plenty of activity late into the night.  It wasn't that way when I first visited Flushing Main St. 20 years ago when the area was only partially Chinese, but it certainly has transformed since then.  I have been to Flushing numerous times, but mostly in the vicinity of Main Street and Roosevelt Ave. since I've typically stayed at the Sheraton hotel there and mostly traversed within walking distance of the hotel.

This time we were driven to a Malaysian restaurant called Satay on a part of Kissena Blvd. I had never been to.   However, this was not a Malaysian restaurant as you or I would think about it. It was Chinese Malaysian food, i.e., food of the ethnic Chinese who live in Malaysia.  The proprietors, staff, and customers all spoke Cantonese, and the menu was in English and Chinese.  The food was prepared similarly to Cantonese food, but the dishes were different.   We had a Malaysian Chinese new year’s salad, golden spare ribs with pineapple, okra with green beans and smelt, an odd duck dish, and shrimp in shell cooked like crispy crab.  The Chinese New Year salad, pictured below, included Chinese red envelopes--filled with sesame seeds to top the salad.  The ingredients in the salad were served unmixed, with the diners then using their chopsticks to mix the salad for good luck. What a fantastic meal! 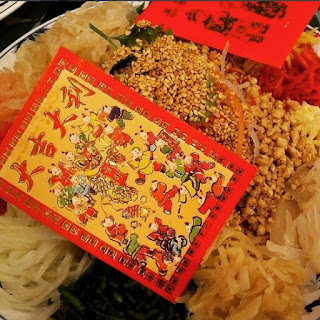 When visiting with the Fung Bros. at Congee Village last year before they moved back to the West Coast 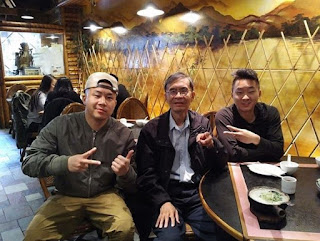 they indicated to me that the one thing New York did better than Los Angeles was old fashioned Cantonese bbq roast meats.  In that regard, the grandaddy of them all in New York Chinatown would be Wah Fung #1 Fast Food on Chrystie St.  Before there was Howlin Ray's Nashville Hot Chicken and long lines in LA Chinatown, there was Wah Fung #1.  Not to say that the lines at Wah Fung are as long, or that the wait time is anything close.  But given the fact that Wah Fung #1 Fast Food is takeout only and it only takes a minute or so to fill an order, I'd guess the volume of business at Wah Fung #1 is higher.

Wah Fung has a simple menu.  You get your choice of chashu, roast chicken, roast duck, and/or roast pork on a layer of vegetables on top of a mound of white rice.  The standard price for a single item is $3.75, and the main (but not exclusive) target  audience is Chinese senior citizens.  I never ate there in over 30 trips to New York City, intimidated by the long lines.   But the Sunday morning line was manageable so I jumped in.