In this post-Trump election world, things have reached a point that almost nothing surprises me.  But I have to tell you that to me, the opening of a branch of Little Highness Bao on Wilshire Blvd. in Beverly Hills pushes the envelope more than anything that seems to be happening in Washington DC. 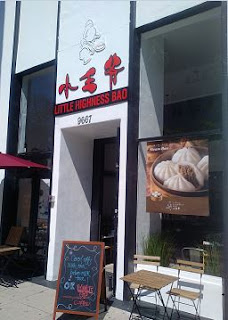 Little Highness Bao is certainly not one of the big culinary names in the San Gabriel Valley.  It opened a small storefront last summer in a shopping center on the corner of Colima Road and Fullerton Road in Rowland Heights, where it purveys a very specialized category of buns, essentially steamed mantou buns filled with things like green bean with pork, chicken gravy with pork and onion, cabbage with vermicelli and dried shrimp (with another variety substituting mushroom for the vermicelli), rib with vegetables, and beef steamed buns.  Indeed it's the only restaurant I've been to that has this kind of specialty.  They also sell dumplings and other related types of fare.  Little Highness does appear to be in an expansion mode as they just opened a fishpot restaurant next to the original Rowland Heights store.  But it's not like they've created any kind of buzz out in Rowland Heights.  So certainly I was totally unprepared when my son Eric sent me a message that one of his foodie scouts had driven by, and even snapped a picture of the new Little Highness Bao location in Beverly Hills

Fortunately I was scheduled to work in Century City the next day, so it was only a slight detour to check out the Beverly Hills location of Little Highness Bao.   And there on Wilshire Blvd. between Roxbury and Bedford, directly across from Saks Fifth Avenue (and kitty corner from Neiman Marcus) was Little Highness Bao.  However when I walked in I momentarily thought I was in the wrong store because it only seemed to be a boba and tea shop, despite the giant mantou bun picture on the front window.  There were no food menus, either permanent, paper, or posted on the wall.  The clerk explained that the only menu was in marker on a side glass partition. 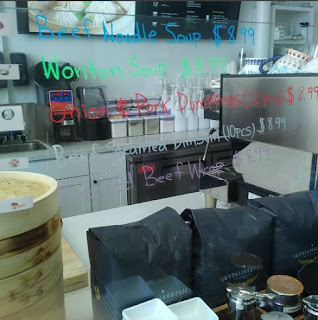 The menu is very sparse.  As you might be able to see, the menu includes beef noodle soup, wonton soup, pork dumplings, beef steamed dim sum (whatever that is), beef rolls, plus their signature pork and beef steamed mantou buns, as well as pork and beef xiaolongbao.  So to their credit they haven't filled their menu with Americanized items, but rather taken the friendliest items from the San Gabriel Valley.  Looking at the other tables in the restaurant, the xiaolongbao, not surprisingly, appears to be the most popular item with the local crowd.  When I was in the restaurant, all the other diners were non-Asian.  I did see a group of Mainlanders,who were apparently walking down the street, stop to take a peek, but then continued on.  I suspect they were unimpressed by the Beverly Hills hipster look of the restaurant, as well as the non-Asian servers and customers.  However, the food tastes like the Rowland Heights branch, the prices are not outrageous (XLB is $10.99, most everything else is under $9) and the cook with the baseball cap sure looked like a Mainlander to me.

Street address is 9667 Wilshire Blvd.
Posted by Chandavkl at 1:57 PM