Recently an article about Chinese cuisine in Los Angeles listed roughly two dozen Chinese regional cuisines represented by restaurants in the Los Angeles area.  Not included in this list of cuisines was the cuisine of Wenzhou, but this was no surprise, as with the case with migrants from Fujian province, most people coming from Wenzhou to the US go directly to New York, and very few make their way to California, though there apparently are enough of them locally for there to be a Wenzhou Chamber of Commerce in El Monte.  (Wenzhou is part of Zhejiang, whose cuisine can be found in Los Angeles, but Wenzhou cuisine itself cannot.)

I first became aware of the Wenzhou population in New York a dozen years ago when I read about how they dominated the pirated DVD business back there, and how a couple of Wenzhou restaurants had opened in Flushing. And when I was in Spain last year, I learned that almost all the Chinese in Spain are from Wenzhou and they specialize in importing low cost knockoff products. The one Wenzhou dish from Flushing that I ate which stuck in my mind was something called variously fish dumpling or fish paste, served in soup with noodles optionally added. I’m not exactly sure if dumpling or paste is a fair description, since there is no dumpling wrapper, and it was more meaty than cooked fish paste.  Rather it's grouper beaten to a pulp, but not as smoothly as the fish paste you see in the stores.  Anyway, while food writer Tony Chen seems to have disappeared as a source of written information on Chinese food, he still has his finger on the pulse, and recently posted a picture from a Wenzhou style restaurant in El Monte.

After a couple of false starts I finally ended up at Masterbee Express, in the space right in the front in the Tito’s Market shopping center at 9814 E. Garvey Bl., in El Monte. But even upon arriving there, there was nothing to indicate anything other than a typical gringo Chinese fast food place. The proprietor who spoke almost no English appeared to indicate that his colorful little menu including fried rice, chow mein, chow fun and jalapeno chicken was all he had, but then he seemed to ask what I was looking for. I tried saying “fish noodle” but that didn’t get anywhere. But then he whipped out some hand held translation device and motioned for me to speak into it. When I said fish noodle, the machine spit something out and he smiled and said “fish balls” and brought out a Chinese language menu with a dozen items on it. There still was some confusion because the fish balls (which by no stretch of the imagination do not look like balls) came either with or without noodles, but an English speaking customer came over and straightened that out. Then when I said “Wenzhou” the owner smiled broadly and I knew we were on the same page.

The Wenzhou fish ball noodle soup was quite pricey–$15.99 for a normal sized bowl of noodle soup, possibly because of the labor required to render the fish. But if you hadn’t tried that dish or any Wenzhou cuisine before, or if you had and liked it the way I did, it’s worth it. This version wasn’t as good as what I had in Flushing, but that’s to be expected given the disparity in the local Wenzhou population between New York and LA.  I'm just happy that the cuisine exists here. 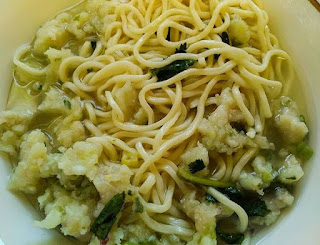 Posted by Chandavkl at 9:11 AM